Lesotho’s mountainous landscapes and turbulent political history provide the backdrop to The Forgotten Kingdom, a 2013 feature film directed by visionary filmmaker Andrew Mudge. We take a behind-the-scenes look at this spectacular production and follow it on an epic journey across Lesotho’s mountains, communities and complex cultural identity. 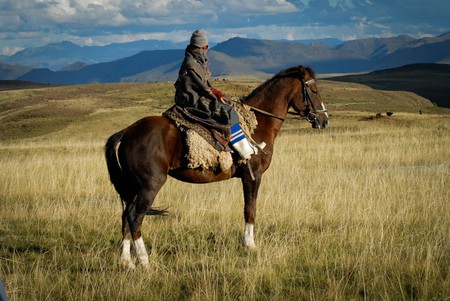 In 2013, at a number of film festivals across Europe and the USA, a small, independent feature film produced in Lesotho and South Africa emerged as an unexpected favorite, and succeeded in picking up an impressive list of awards, including Best Cinematography and Best Narrative Feature at the Woodstock Film Festival, as well as Audience Awards at the Cambridge and Sarasota Film Festivals.

The Forgotten Kingdom tells the story of Atang, a young man living in Johannesburg who travels back to Lesotho – the country of his birth – to bury his father. Atang is an angry, bitter character who feels estranged from his homeland, but as the film progresses, a chain of events forces him to embark on a journey of self-discovery across the country that he had forgotten and, ultimately, to re-evaluate his relationship to it. 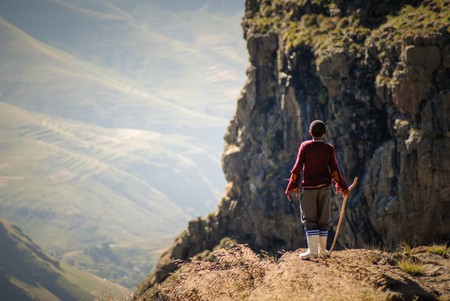 Lebohang Ntsane during the filming of The Forgotten Kingdom in Lesotho | © Meri Hyöky Photography.

The film has received much praise for its cinematography, and especially for its portrayal of the stark, natural beauty of Lesotho – a largely mountainous country which, in tourist brochure language, is often referred to as the ‘Kingdom in the Sky’. Lesotho’s lowest point is 1,400 metres above sea level (it boasts the title of having the ‘highest lowest point’ in the world), and the majority of the country is at an altitude of above 1,800 metres.

Amongst its many socio-economic complexities, the country’s relationship with its neighbor – South Africa – is far from simple. Lesotho is proudly independent, but many of its inhabitants have ties on both sides of the border. Migrant labour plays a big part in the country’s history, and many Basotho continue to leave in search of work and opportunities in South Africa.

Atang’s story of estrangement, therefore, is far from unusual in Lesotho. The Forgotten Kingdom is framed from the perspective of a protagonist who feels that he is an outsider in his own country, and there are many viewers who will identify with its themes of leaving, returning and having to figure out one’s relationship to a place. The visionary behind the film, however, is a complete outsider to the country: an American whose first encounter with Lesotho was in 2003.

Writer and director Andrew Mudge first travelled to Lesotho to visit his brother, who was working as a Peace Corps volunteer in the small town of Mohale’s Hoek in the south of the country.

‘My first experience of Lesotho was completely unexpected,’ says Mudge. ‘So many Americans have all kinds of stereotypes about what ‘Africa’ is: the savannah, the heat, the wild animals. But Lesotho isn’t any of that. Its unique beauty is unforgettable and the adventure of it all, for me, beckoned for an odyssey-type film. A character from the outside comes in and goes on a journey. The arc of the story was there from the beginning.’ 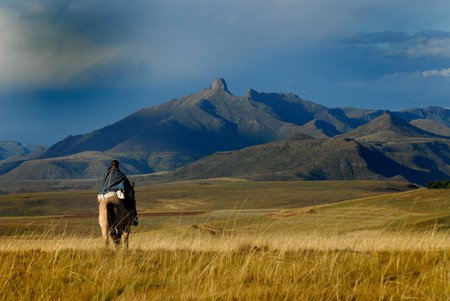 The making of the film, however, was a long journey in itself. It took Mudge a few years to develop the storyline and to commit to the project and in 2006, he returned to Lesotho to shoot a trailer for the film. Promises of funding came and went and it was only in 2011, when he had secured funding from a number of private donors, that he was finally able to come out to Lesotho with a crew. In Lesotho, a number of others came on board, including film students from a local university.

A small film industry is only just beginning to develop in Lesotho, and the country has very few professional actors. Two of the lead characters – Atang and his love interest, Dineo – were played by Zenzo Ngqobe and Nozipho Nkelemba, both of whom are well-known South African television stars. However, the third major character – a nameless orphan boy who accompanies Atang on his travels – was played by Lebohang Ntsane, a young Mosotho boy who had never acted before, and who has since received much acclaim for his performance, including a recent nomination for Best Child Actor at the 2014 African Movie Academy Awards. 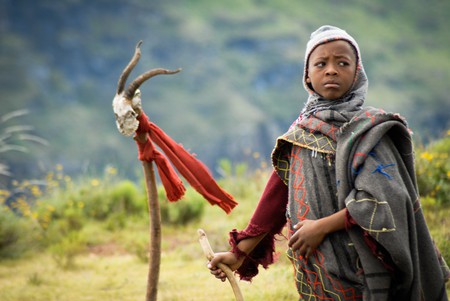 For ten months, Mudge and his crew faced the many challenges that accompanied filming in Lesotho. The majority of the film’s locations were in remote, mountainous areas that were only accessible by dirt roads. The cast and the crew spent much of their time travelling, and wherever they stopped, food and accommodation had to be sourced. Vehicles broke down, unexpected thunderstorms hit, and filming had to continue through a winter that was bitterly cold. Halfway through filming, funding ran out and Mudge had to find ways to source more money to continue.

But in spite of it all, after a further two years of editing and post-production, there was in 2013 a final product. After its tour of film festivals, the film was picked up by a Southern African distributor and it opened in cinemas in South Africa and Lesotho in April 2014. Before this could happen, however, Mudge had a final journey in mind, which – to him – was an essential part of the making of the film.

He recalls: ‘When we were filming we would tell people: ‘we’re going to come back, we’re going to screen this film here’. We needed to make good on that.’ 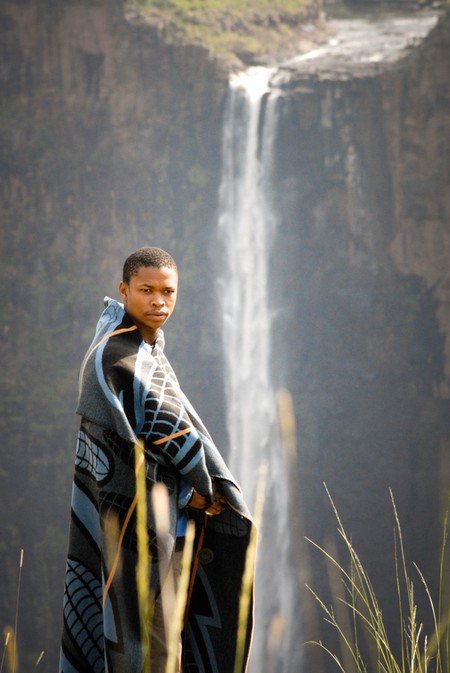 In March 2014, Mudge and a small team travelled around Lesotho on a road show with a difference. Armed with a projector, a huge blow-up screen and speakers, the team returned to a number of key filming locations and set up impromptu, open-air cinemas where they screened The Forgotten Kingdom for free.

As fortune would have it, March 2014 proved to be a very rainy month in Lesotho. In Semonkong, a small town in the interior of Lesotho, the heavy rains cleared just in time for the open-air screening at the local football field. However, in St. Michael’s, just outside the capital Maseru, and in Ha Seetsa, in the north of the country, the rain meant that nearby churches had to be used for the screenings. Despite the rain, wind and cold, however, hundreds of people turned up to each screening, wrapped in clothes and blankets. 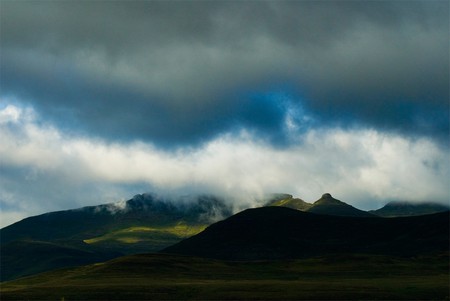 For many people, especially in remote villages, and particularly for children, this was their first cinema experience. At some of the screenings, the audience were standing in the very place where a scene had been shot, and there were shrieks of delight and much cheering as people recognized familiar locations.

‘In the USA, people would just shrug and say: ‘Oh, another movie screening.’ At film festivals in Europe, everybody in the audience was always so quiet,’ says Mudge. ‘The experience of screening in Lesotho was completely different. The audiences on the road show were by far the most vocal of any audience. People laughed, and shouted, and whistled. I also loved getting up to the light of the screen and watching the expressions on the children’s faces.’ 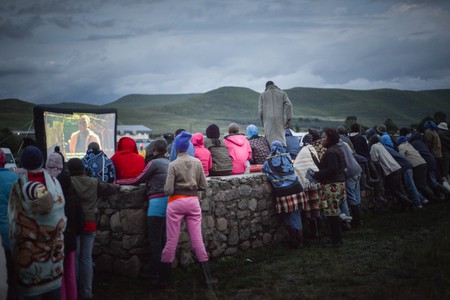 One of the screenings took place in a small village in Mokhotlong, a district in the northeast of the country. Against a spectacular mountain backdrop, the screen was set up just off a road in the village, and a small crowd – including herd boys and men on horseback – gathered to watch on a hillside.

‘During that screening I went for a walk,’ recalls Mudge with a smile. ‘I walked out onto the road and everything felt so distant, so quiet. I could hear only the laughter from people who were watching, and the sounds of animals and bells. There was something magical about it.’

‘Filmmaker friends have said to me before that making a film is an amazing experience, but what’s really unique is to make a film in small communities where you can go and share it. The road show was an incredible bonus to the normal ups and downs of making a film. I don’t think that I will ever get to do something quite like this again.’ 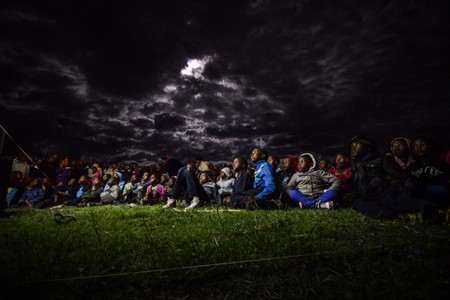 A moonlit screening in Mohale’s Hoek, a town in the south of Lesotho | © Meri Hyöky Photography
Give us feedback