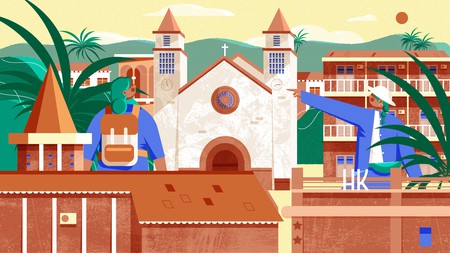 Wedged between Senegal, Guinea and the Atlantic Ocean, Guinea-Bissau is a calm and peaceful country at odds with its turbulent political history. Home to over a quarter of the 1.8 million population, Bissau is the country’s beating heart.

Founded in 1692, the former Portuguese trading post of Bissau is 84 years older than the United States and became the capital of the newly independent Guinea-Bissau in 1974. It is by far the country’s largest city and biggest port as well as its political, financial, administrative and military centre. Yet, despite being the epicentre of Guinea-Bissau life, it is a capital city like no other: quiet, crumbling, airy and eminently walkable. 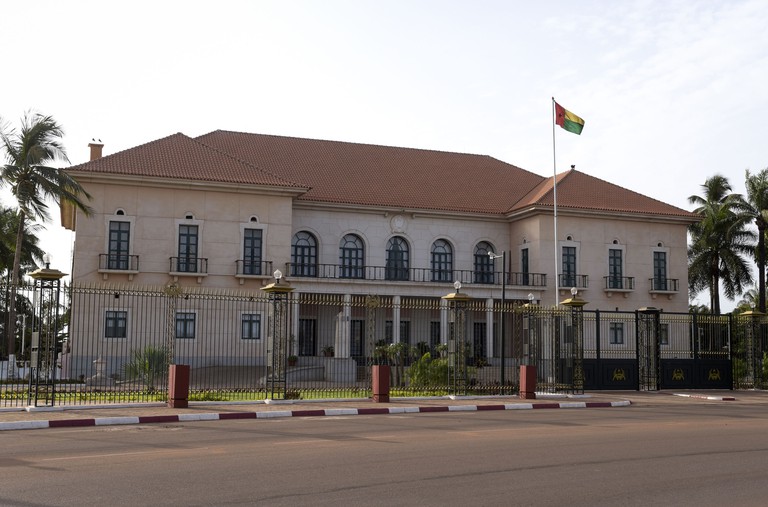 At the core of Bissau’s central districts of Praça and Bissau Velho (Old Town) lies National Heroes’ Square: a giant roundabout consisting of bench-lined walkways, miniature pruned gardens and an imposing central monument. As quiet as a cul-de-sac and almost devoid of vehicular traffic, it is a central square like no other capital and provides the panorama for the recently-renovated Presidential Palace. With its cream facade, arched windows and wrought iron balconies guarded by towering palm trees, the Palace evokes the splendour of a Carribean Governor’s mansion, but until recently was solely inhabited by bats. A symbol of Guinea-Bissau’s political upheaval, the Palace was heavily bombed during the civil war of 1998-1999 and then suffered a chronic lack of investment as the country witnessed two coup d’états, eight presidents (one killed) and 18 prime ministers between 2000-2017. 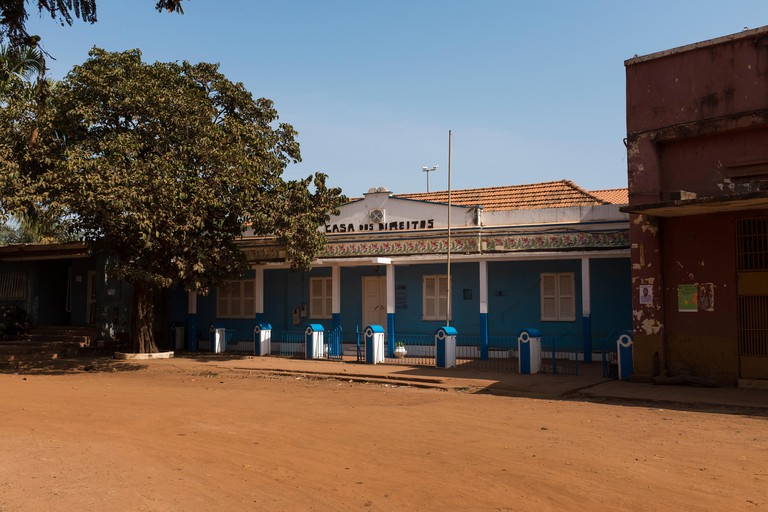 The Amura Fort lies on the edge of the city’s old town: an urban planned grid of low-tiered buildings with metal-grilled windows, carved balconies and terracotta-tiled roofs. Built in the 1950s, the Velho was the Portuguese colonial centre and has remained untouched since. The tangle of telephone wires strung between the rooftops offer a nod to modernity, while the flaking, faded pastel exteriors of the colonial-style houses and warehouses are juxtaposed with the modern Jeeps and Nissan Micras that line the cracked tarmac streets.

The Fortaleza de São José da Amura has been operational since 1765. The trench-lined square fort is the current headquarters of the Guinea-Bissau military; its ramparts dotted with ancient artillery guns, its soldiers catching shade under leafy trees. Officially closed to the public, it is open for guided tours depending on the whims of the personnel. By either charming the soldiers on duty (between 10am and 4pm) or speaking to the enigmatic comandante known as Major Napoleon, a guided trip around the fort is a journey through Guinea-Bissau’s recent political history. From the mausoleum of Amílcar Cabral, the leader of the independence movement, and the car he was killed in (he was assassinated in Conakry in 1973, more than a year before independence) to numerous memorials and homages to the country’s patriots, it vividly brings to life Guinea-Bissau’s violent 11-year liberation struggle. 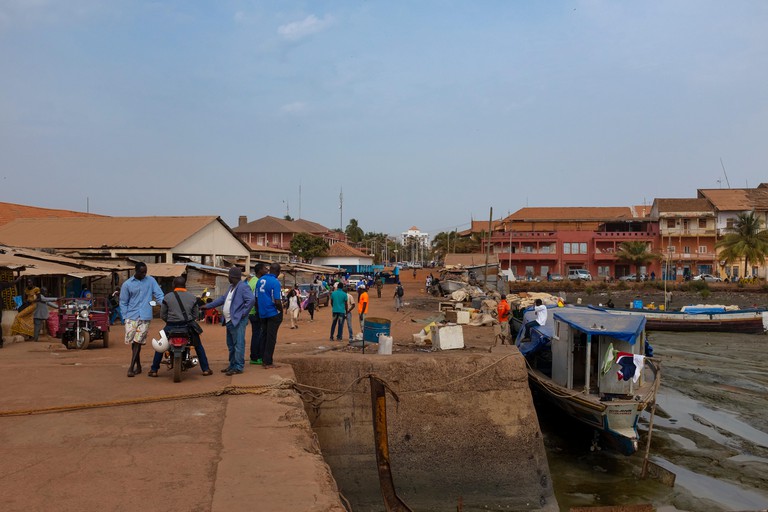 Bissau lies on the Geba River estuary, which flows westwards from the Fouta Djallon highlands in Guinea. Wide and deep for almost 50 miles (80.5 kilometres), the Geba provided the ideal channel for the Portuguese to transport gold, ivory, pepper and slaves to the Atlantic. Today, the port remains a hub of activity: from ferry services to the 90-island Bijagós Archipelago (17 of which are inhabited) and southern Guinea-Bissau, to the export of cashew nuts (which account for 60 percent of GDP) and a buoyant fishing industry. A stroll down Avenue 3 de Agosto provides great views of the port, the Geba and the Ilhéu do Rei (King’s Islet) – a small offshore island hosting a crumbling peanut factory – before reaching Pdjiguiti Harbour. Here, colourful pirogues, seabirds and eager fishermen all prepare to plunder the rich West African waters from one of the most historically-important spots in the country. On 3 August 1959 (hence the street name), 50 striking dock workers were massacred at the harbour by Portuguese police, igniting the independence movement. A giant clenched black fist known as the Mão de Timba (‘Hand of Timba’) stands to commemorate those who died on the adjacent Praça de Martires (Martyr’s Square). 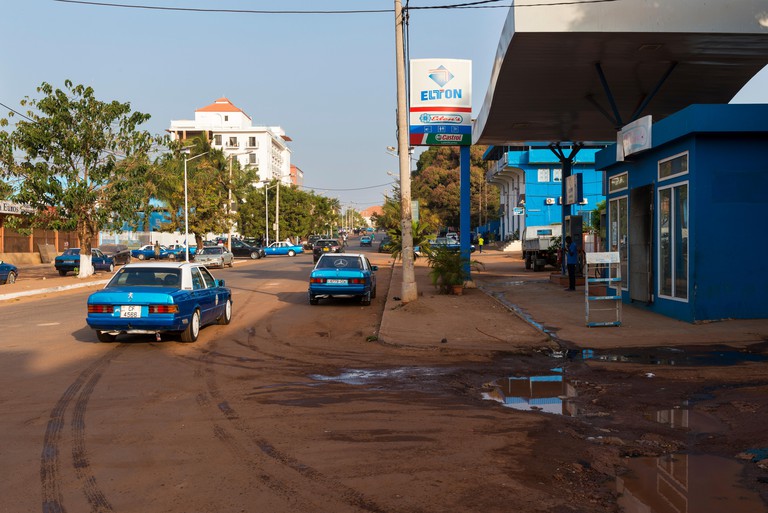 Connecting the port and National Heroes’ Square is Avenida Amílcar Cabral, a street lined with various architectural styles. The Catholic Cathedral is built in medieval mode with its twin clock towers also serving as lighthouses. Opposite, the Ministry of Justice proudly displays white Greco-Roman columns, while the dilapidated Ministry of Finance writes its own metaphors. Ambling down this central avenue, there is an intoxicating calmness. There is no ‘buy this, buy that’ mentality; no shuffling shoals of tourists; no catcalling from souvenir shops. In fact, there are no souvenir shops. Instead, foreigners are met with even less than a cursory glance. Scooters gently roll underneath the Guinea-Bissau flags that adorn overhead wires like bunting. Even the blue and white taxis seem to cruise with a motorised hush. It’s a persuasive advert for the lethargy of Bissau life.

Part of Bissau’s charm comes from the view from a plastic chair as city life meanders by.

Na Tábua by the port is the place to go for seafood, but when it comes to resting weary feet, check out the restaurant-bar of the Hotel Kaliste. Kaliste is nestled on the corner of Praça Che Guevara (known as Praça Bayana to taxi drivers) and provides a constant montage of Bissau life.

Meanwhile, the café at the Hotel Imperio provides a who’s who of Bissau as suits and briefcases mingle with uniforms and boots.