The Best Time of Year to Visit Ethiopia 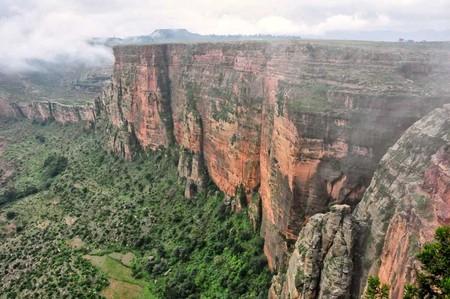 Ethiopia’s weather doesn’t leave much room for the thrill of uncertainty – it’s mostly pleasant with no surprises. From October to May, travellers can bask in the sunshine with limited rainfall. Even during the country’s cloudy days, from June to August, when rain showers are at their heaviest, a little bit of sunshine is always guaranteed. The country’s weather varies with elevation and it’s wise to check each city’s forecast before starting your journey, and some areas are better visited in a cooler season than others. This guide will help you plan your visit to Ethiopia.

Drum beats, chants of religious songs, a sea of people dressed in white; the celebration of the Ethiopian Epiphany, Timket, is a glimpse of Ethiopia’s spiritual side. The holiday is a celebration of Jesus Christ’s baptism in the River Jordan with a festival that lasts for three days. Deacons wearing golden robes carry replicas of the Ark of the Covenant called Tabot to Jan meda, Addis Ababa, a place where the celebration takes place. Priests and deacons pray on a pool of water and spray it on people to purify their souls from sin. The parade taking place is spectacular to witness and be a part of. January is also a good time to visit Ethiopia to see the Ethiopian Christmas celebration. Yegena chewata, a game similar to hockey, is played during this holiday. The weather is cheerful and packing light clothes is recommended. 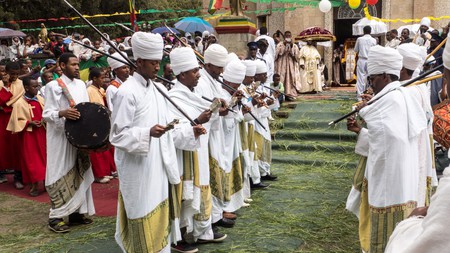 Trekking in the Semien Mountains is ideal in February. The dry season makes ascending Ras Dashen, the highest mountain in Ethiopia, more convenient. This UNESCO World Heritage site boasts spectacular landscapes with its raw and rugged beauty and diverse wildlife endemic to Ethiopia. This time of the year is also great for a visit to the Gambella National Park, home to Africa’s second-largest mammal migration. Hailing from Tanzania, South Sudan and Uganda, more than a million endangered white-eared kob antelopes make a home in the park in search of grasslands before returning South after three months.

The Semien Mountains, the roof of Africa | @SarahTz / Flickr

Ethiopia is an African nation that has never been colonised, thanks to the battle of Adwa, which saw Ethiopians triumph over an invading Italian army in the 19th century. The historical battle and the heroes that have fallen for the freedom of others are revered annually in March. This month also features the bull jumping ceremony of the Hamer tribe. To prove that they are eligible bachelors, the young men of the Hamer tribe in South-Western Ethiopia have to go through a three-day long rite of passage; run on the back of 7-10 bulls lined together four times without falling. If he pulls it off, the young man is then called the Maza, which is a symbol that he can marry whomever he pleases. The weather is mostly dry with a few rainy days. 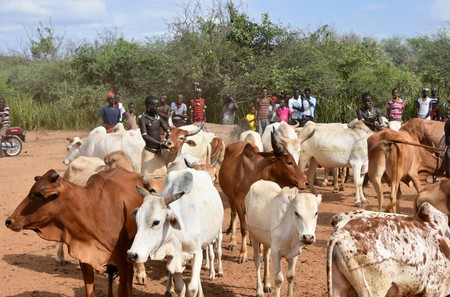 The Ethiopian Easter usually falls on a different date than the one on the Gregorian calendar. After almost two months of fasting with no meat or any animal products, Ethiopian Orthodox Christians break their fast at 3am on Easter day. Paradise for a meat lover, almost all of the holiday dishes contain meat of some kind. The Paschal Vigil on Saturday night lasts until 3am, at which point people return home from church to start the holiday feast and the long tradition of dining together. The weather complements the holiday mood with more sunshine than cloudy days. 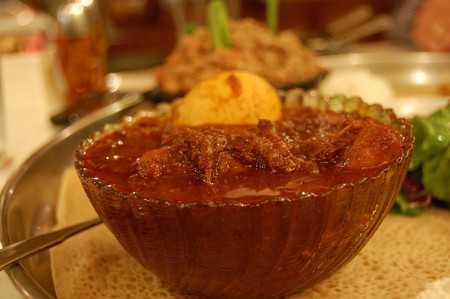 Ethiopia strongly identifies with and honours its past. The celebration of the Ethiopian Patriots’ Victory Day is one of these events where you can see flames of patriotism burn bright. Italy’s attempt to colonise Ethiopia prompted a second war between the two countries, but Italy was ultimately defeated in May 1941. Proudly displaying their military decorations, veterans who fought to liberate their country take part in the event. It is a time when stories of sacrifices for the sake of freedom are told. Everyone is invited to the celebration that takes place around the Miyaziya 27 square in Addis Ababa. The weather is generally warm and you can expect to see a few rainy days. For those planning a trip out of the capital city, the dry season also makes boat cruises more enjoyable. 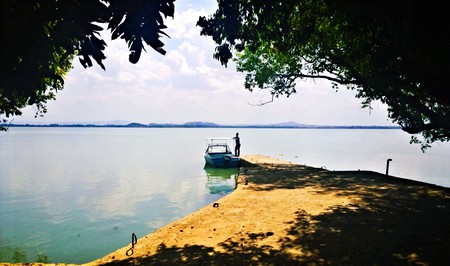 Tana, the largest lake in Ethiopia during the dry season | @SarahTz / Flickr

The rainy season is in full swing starting in June, which results in an increase in the water level of lakes. The fields are covered with lush green scenery and are beautiful to watch. It works to your benefit if you want to enjoy your trip alone and not run into hordes of other tourists. However, trails can be muddy for those seeking a trekking experience and roads could be difficult. Anticipate chilly weather and pack layers of clothes and a warm jacket.

Celebrated for more than 2,000 years, Fiche Chamballala is a New Year celebration among the Sidama People of Ethiopia in the Southern part of the country. A two-week celebration, the holiday has been inscribed by UNESCO as an Intangible Cultural Heritage of Humanity. Although it has occasionally been celebrated in June and July, New Year dates are not constant and depend on observations elders make on the positions of the moon and the stars. Celebrations take place on the lake of Hawassa. More rainy days are in the forecast this month but the sun is never too far away. 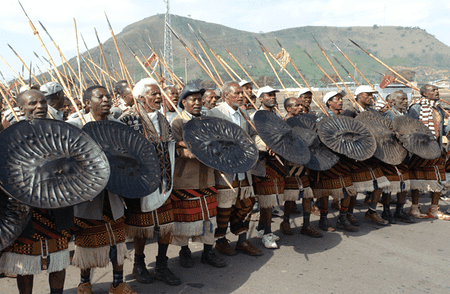 Ashenda is a cultural festival in the northern part of Ethiopia. A group of girls and young women go from one house to another beating their drums and singing a traditional song. The festival takes place at the end of a two-week fasting period called Filseta, which is done in honour of the death and incarnation of the Virgin Mary. It is customary to give the group of girls a gift of some sort, like food or money, at the end of their performance. A similar festival, one for the boys, also happens during this month. Marking the last days of the rainy season, Buhe is a holiday that remembers the transfiguration of Jesus on Mount Tabor. Young boys go from one house to another beating the ground with a long stick in their hands and creating a rhythmic sound. People light bonfires in the evening. Rain showers are at their heaviest; keep your umbrella and rain gear close. 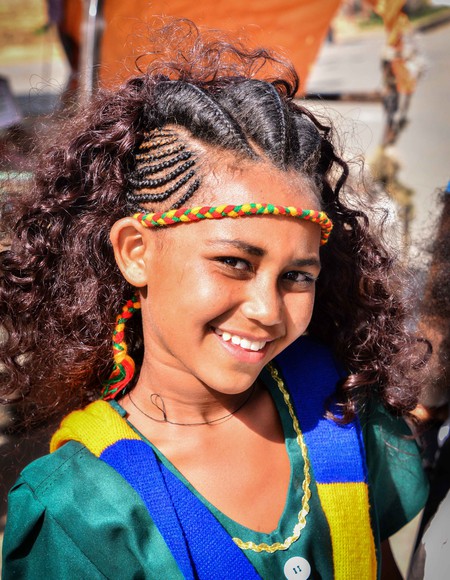 September features two important holidays: the Ethiopian New Year and Meskel festival. Ethiopia celebrates its New Year Enqutatash on 11 September, as the country follows its own calendar, which makes it fall seven to eight years behind the Gregorian calendar. September marks the end of the rainy season and fields are carpeted with endemic yellow daisies called adey abeba, which grow for only two months in a year. Even more spectacular to see is the Meskel festival, a holiday that celebrates the discovery of the cross on which Jesus Christ was crucified in Jerusalem. A portion of the True Cross is believed to be in Ethiopia. This holiday is inscribed by UNESCO on the Representative List of the Intangible Cultural Heritage of Humanity. A large group of Orthodox Christians gather around Meskel square in Addis Ababa and sing spiritual songs. At sunset, people light bonfires called demera.

Meskel, a celebration of the finding of the True Cross | © Joepyrek / Flickr

Celebrated at the end of September or the beginning of October, Irrecha is a thanksgiving ceremony by the Oromo ethnic group. They thank God for seeing them through last year and blessing them with a new one. Attended by thousands, the celebration takes place at Hora Lake in Bishoftu, some 45 kilometers (30 miles) south of Addis Ababa. Join the ceremony and give thanks for the beautiful sunny weather. 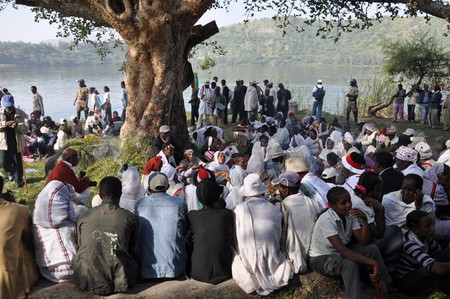 The Ark of the Covenant holding the two stone tablets of the Ten Commandments is believed to be in Ethiopia and the anniversary of its arrival to the country is celebrated on November 30 at Saint Mary of Axum. Thousands of Ethiopian Orthodox Christians make the pilgrimage to the church to be a part of this large festival. Thousands of others participate in Africa’s biggest running race, the 10km (6mi) Great Ethiopian Run, taking place in late November. Ethiopia is home to some of the world’s greatest runners, like Haile Gebreselassie, founder of the Great Ethiopian Run, and the odds are strongly tilted in your favour to jog alongside them. The event is fun-filled and has the pleasant ambiance of a street party under the pleasant Ethiopian sun. 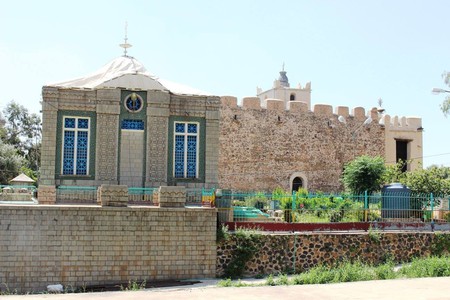 The resting place of the Ark of the Covenant | © Serkalem Tafesse

December is the best time to visit the Danakil Depression, the hottest place on earth, in the northern part of Afar, and admire its colourful landscape. The weather in this part of Ethiopia is never welcoming but this month makes the scorching heat less hostile. December is also ideal for trekking in the Bale Mountains, where you can see unique birds and mammals and endemic animals like the Ethiopian Wolf. You can also visit Tullu Dimtu, the second highest mountain in Ethiopia. In most parts of the country, rain is hardly in the forecast. 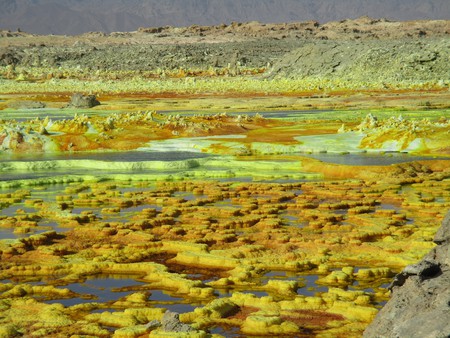 When not to go to Ethiopia

For the most part of the year, the weather is sunny and dry, making it convenient for travellers. No time would be a bad time to visit Ethiopia. The months from June to August, however, see more rain showers than others and roads could be muddy and less convenient for off-road driving.