The Best Things to see and do in Addis Ababa, Ethiopia 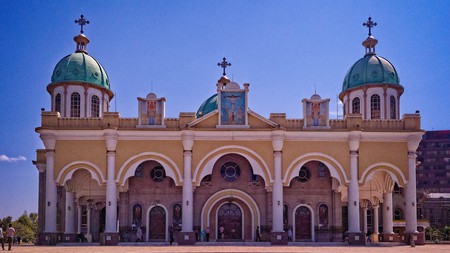 From the earliest-known human to Africa’s biggest marketplace, Addis Ababa is packed with remarkable sights. Here are 10 must-see attractions for the buzzing East African city.

Too many travellers skip over Ethiopia’s rambling capital, using it only as a springboard into the country’s popular northern circuit. Those who do risk missing out on one of Africa’s fastest developing cities; a cultural and culinary hub, home to the best museums, restaurants and experiences in the country. Culture Trip spoke to Addis expert Xavi Curtis of Go Further Tours to pick up his top tips on uncovering Ethiopia’s biggest city.

An unassuming concrete-block building marked by a simple sign, upon first impression it’s hard to believe that Ethiopia’s national museum holds arguably Africa’s most important discovery. Enter Lucy, a 3.2-million-year-old hominid fossil. Discovered in 1974, in Ethiopia’s remote Northwestern Afar region, the fossils are believed to be those of one of humanity’s oldest existing ancestors. The entire basement is dedicated to the story of Lucy, her discovery and the wider topic of human evolution. Along with two casts of Lucy (the original fossils are stored for preservation), the remains of Selam, an infant hominid believed to pre-date Lucy by more than 100,000 years, are also on display. The upper floors are also worth a look, particularly for the Ethiopian art, dating back to the 1300s (believed), and a host of artefacts, some of which pre-date the 1st century.

Part historical monument, part unofficial sports centre, Meskel Square is Addis Ababa’s most famous landmark. On any given day, runners can be found pounding the 600m-long terraced steps, training in relative peace amid the chaos of the city centre. More semi-amphitheatre than a square, it’s also the site of the Meskel Festival, a yearly celebration of the crucifix. Thousands gather here on 27 September (17 Meskerem in the Ethiopian calendar) to take part in torchlight processions and witness the enormous bonfire that marks the festival. Whether early morning or evening, the square offers a snapshot of everyday life in Addis’s vast urban sprawl. It’s also within walking distance of the African Jazz Village, the Red Terror Martyrs’ Memorial and the Oromo Cultural Center.

After decades of suppression during the Derg era, Ethiopia’s mesmeric jazz scene is making a comeback across Addis Ababa. The genre took off in the 1960s, when pioneers such as Mulatu Astatke merged the unique tonal palette and scales of Ethiopian folk with Western jazz principles and Latin rhythms. The result was Ethio-jazz. Once the heart of the city’s nightlife, only a handful of dedicated jazz venues remain. That said, its popularity is growing with the younger generation, so it’s easy to catch some live jazz on any given week. Try Metro at the Hyatt Regency Hotel, Office Bar at the Sheraton Hotel and Fendika Azmari Bet, Kazanchis (most Mondays and alternate Fridays).

So vast is Africa’s largest outdoor market, it feels more like a make-shift village than a place of commerce. At the last count, more than 7,000 businesses were hawking their wares from its sprawling site in Ketema. With its thriving mass of people in flux, honking vehicles and countless herds of livestock, wading into Merkato can be an overwhelming assault on the senses for a newcomer. For the traders and buyers, it’s business as usual, and, although it feels like a free for all, the stalls are arranged roughly by product. Fresh fruit and vegetables; coffee beans and jebenas (Ethiopian coffee pots); aromatic spices and brimming sacks of grain; colourful shawls and knock-off clothing; and homeware and recycled goods occupy their own space amid the madness. The market is infamous for pickpockets and petty theft, so a guided tour is usually the safest way to visit.

For those delving deeper into Ethiopia beyond Addis, the Ethnological Museum is a must visit. Located in Haile Selassie’s former palace on the grounds of Addis Ababa’s main university campus, the museum offers a detailed overview of Ethiopia’s complex cultural make-up. The museum’s largest and most important exhibit begins on the first floor. Split into three parts of the human life cycle, the displays explain the different ethnic traits, traditions and cultures of Ethiopia through Childhood, Adulthood and Death. The other major displays cover religious art and traditional musical instruments, while the preserved bedroom of Haile Selassie is also worth a look.

Rising from the northern reaches of the city like a mighty crown, the Entoto Hills offer a little taste of Ethiopia’s spectacular Highlands. At Mount Entoto, the tallest peak in the range, the sweeping views reveal Addis in all its vast, sprawling glory. Legend has it that Emperor Menelik II and his wife Taytu Betul stood here before deciding to create Addis Ababa in the green valleys below. A small cluster of huts mark the Emperor’s last palace before founding the permanent capital in 1886. The mountain is considered sacred in the Ethiopian Orthodox faith, with various churches scattered around the peak.

Over the last decade or so, a small contemporary art scene has sprung up from the frenetic streets of Addis Ababa – at the forefront of the revolution is Addis Fine Art. A small independent gallery in the vibrant Bole area, AFA supports Ethiopian and diaspora artists (those with Ethiopian heritage who live abroad) and has quickly earned a reputation as one of the country’s leading contemporary art spaces. Since opening in 2016, Addis Fine Art has hosted regular exhibitions from prominent and emerging artists, such as Girma Berta, Lulseged Retta, Tesfaye Urgessa and Eyerusalem Jiregna.

The Red Terror Martyrs’ museum is a sobering tribute to the victims of Mengistu Haile Mariam’s Derg regime, which ruled over the country between 1975 and 1987. It’s estimated that as many as 750,000 people died during the party’s brutal reign; as the Derg attempted to crack down on political opposition, abduction, torture and murder became commonplace across Ethiopia. The brutality reached its bloody zenith between 1977-78 during the ‘Red Terror’ purges, one of the darkest periods in Ethiopia’s recent history. Although small, the memorial is overwhelmingly powerful. In one room, floor-to-ceiling mugshots of the disappeared cover the walls in black and white; in another, you’ll find boxes of blood-stained clothing, bones and skulls. Be warned, it’s a moving experience.

Addis Ababa’s newest big attraction, the Unity Park was opened in 2019 by Nobel Peace Prize-winning Prime Minister Abiy Ahmed. Up until that point, most Ethiopians had never set foot within the grounds of Ethiopia’s National Palace, a secretive complex from which the country had been ruled for more than 130 years. Today, it contains a host of cultural attractions, including a small museum, a grand banquet hall and the former palace complex of Emperor Menelik II. There’s also a small zoo which contains rare black-maned lions that were once common across Ethiopia. Set high on a hill in the centre of the city, it offers a sweeping panorama of Addis, plus something even rarer than an Abyssinian lion: green parkland within the city centre.