Ethiopia's Bull-Jumping Ritual Turns a Boy Into a Man 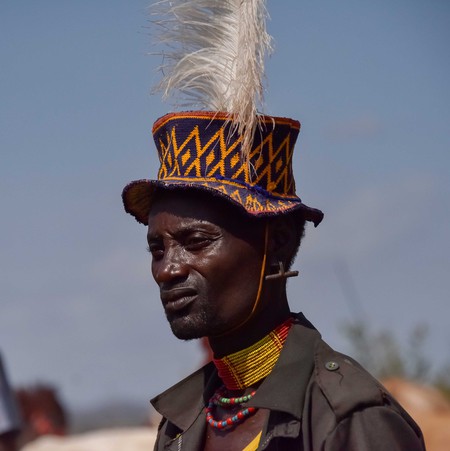 A warrior from the Hamer tribe | © Rod Waddington / Flickr

In the Hamer tribe, the only thing that stands between a young boy and him becoming a man is cattle – literally. Bull jumping is an ancient ritual in Southwestern Ethiopia that proves if a man is ready to build a family of his own. Here is the journey the young Hamer boys take to become men.

The Hamer people live in the Ethiopian Omo Valley, which extends from the Omo River to Lake Chew Bahir in South West Ethiopia. For many generations, people of the Omo Valley have led a traditional life. Most members of the Hamer tribe are pastoralists, which is why cattle hold a significant place in their culture. From an early age, children are taught to farm land and look after the livestock.

Grab it by the horns

As teenagers, Hamer boys have to go through a rite of passage to be called a man and get married. The ceremony puts the young boys’ bravery and courage to the test. Being able to conquer fear and complete the task ahead is a lesson they have to learn to become a man – it’s also their time trying to take a bull by the horns. The ceremony, which usually takes place in October or November, involves running on the back of seven or 10 bulls four times without falling. Locals claim the ancient ritual has been practised for more than three centuries.

The eldest child of a family must go through the rite of passage before his younger siblings can follow. The father, or uncle in his absence, decides when the eldest boy is ready for the bull jump. Depending on their father’s decision, some boys perform the bull jumping as young as five years old with the help of community members. To show he has chosen his son to go through this rite of passage, the father gives the boy a short stick the Hamer people call boko. Presenting the boko given to him by his father, the boy then has to travel to all of his relatives’ houses to tell them the news and invite them to the ceremony. The journey can take a few days.

The boy’s family decides when the big day should be, and the decision is based on the amount of time it would take them to prepare a feast. As the Hamer people don’t use calendars, the boy gives each relative a coil of rope carefully marked to show the number of days leading up to the ceremony. Every day, the relatives cut a piece from the rope to keep track of how many days are left before the ritual. 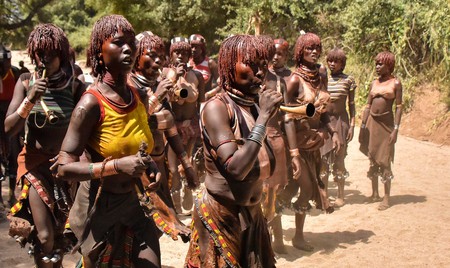 When the long-awaited big day finally arrives, a local alcohol beverage is served to those who have come to celebrate. Depending on the social status of the boy’s family, close to 100 or over 300 people gather to witness the event. Hamer women, dressed in traditional clothes and adorned with bells around their legs, start dancing together and play their loud horns.

The ritual takes a turn when the women (young girls are discouraged from joining this part of the ceremony) begin to display their devotion and encouragement to the young boy who is about to take part in the bull jumping ceremony. In between dancing, they approach ‘the men’ who have just gone through the ritual, begging them to whip their backs with birch sticks. The boy’s maternal family wear a beaded belt around their waist and are usually not expected to take part in this part of the ceremony. Even after repeated whipping, the women refuse to back down, competing instead against each other. The women believe that the greater the pain they endure, the higher the level of loyalty they’re showing to the young boy; the scars left on their body are a symbol of the loyalty they’re entitled to receive from him. 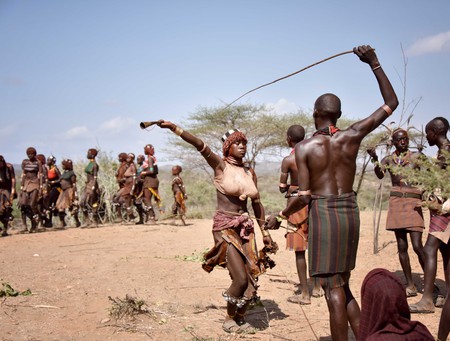 A leap to becoming a man

As sunset approaches, the young boy gets ready for one of the most important days of his life. Elders and men who have performed the ritual before, but are not yet married, gather castrated male cattle for the traditional coming-of-age ceremony. The bulls are smeared with dung to make them slippery. Before leaping over the cattle, it is customary for the young boy to be naked and for his hair to be partially shaven. His body is then rubbed with sand to wash away his sins and get rid of bad luck and smeared with dung to give him strength. As a form of spiritual protection, strips of bark are strapped around his body.

With the blaring sound of bells and horns still in the air, the young boy takes a leap. He steps on each bull’s back before making a final jump back to the ground. By demonstrating his agility, bravery and strength, the young boy shows he is fit to become a man. 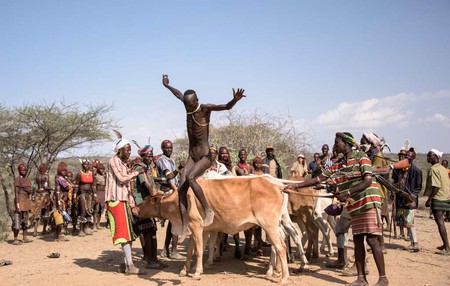 As he completes the bull jumping, the young man is called the Maza | © Rod Waddington / Flickr

If he manages to run over the bull’s back without falling four times, the young boy is then bequeathed the title Maza, a major milestone that means he is ready to marry a woman chosen for him by his father. Hamer men are allowed to marry as many as four wives, but the first wife is always chosen by their father following this ceremony. It is customary for the boy’s father to give 30 cows to the bride’s family as dowry.

If the odds are against him and he falls more than four times, the young boy will have to wait for another year to try once again. If successful, the tribe applauds the young boy for being a man by placing animal skin on his neck, blowing horns, jumping and cheering. Celebrations of a young boy turning into a man continue until the early hours.