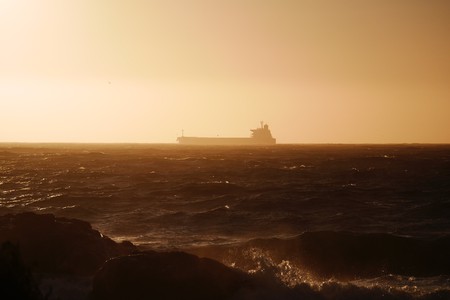 Strange, all-powerful invaders storm the country of Ngbandi in these opening pages to Cyriaque Robert Yavoucko’s novel Dusk and Defiance (Crépuscule et défi), from the Central African section of our Global Anthology.

What a disaster! What a disaster! Who would have believed it! Who will believe it! The actions, the movements came rushed, rapid, indomitable, like lightning. The surprise paralyzed everything, froze all life; the defeat was prompt, total. Like an avalanche, it fell upon the country, destroyed all resistance, everybody. It was as if the anger of these invisible forces, of the spirits of our ancestors, was breaking out, exploding after so many affronts, impieties, violations, and prohibitions. It was as if the spirits of the waters, provoked, reacted violently by unleashing one of those sudden and unexpected floods that overflow the riverbed in the blink of an eye, to swallow whole villages, and destroy fields, animals, and men. More than that, it was like a conspiracy of the gods, a stratagem plotted in inaccessible spheres, to sweep down on the country of Ngbandi and imprison its men in a black shroud; it really had to be a superior force, spirits of formidable power, to have inflicted such humiliation, such rout, such desolation!

What foolhardiness, what legendary myth of invincibility had just been swept away, pulverized in a flash! And to say that the country had always conformed to the codes of its ancestors, that laws and prohibitions were always respected, wrongs and infringements repaired by sacrifices!

This violent battle, this bloody battle revealed to the country what realities it had previously ignored; it shook its structures profoundly, revealed its weaknesses, its failures and its shortcomings—a rare spectacle, very rare in the character of its people. It showed, in equal measure, acts of sublime heroism as well as evidence of cowardice and resignation. As far back as can be remembered, this was the first military defeat the country of Ngbandi had suffered since its men had installed themselves in and around the three rivers, and had become their absolute masters.

If legends mention the water gods mbombas episodically appearing to individuals throughout the generations, coordinated attacks by these venerated, and feared, beings were never reported. It was said that they usually tempted their victims to go to the river, often provoking great storms, and thus surprising them in small boats far from the coast, retrieving the sailors who had been knocked overboard by the shock of the ocean’s foamy waves. So then for what grave offense, what impiety, have they taken human form to openly fight men? It would require that Ngbandi violate a fundamental law, one of those essential creeds whose non-observation endangers the very lives of invisible spirits and forces.

So they came in floating boxes, the mbombas! Yes! Real mbombas who took human form to openly attack the living! Our ancestors didn’t think it possible… they never foresaw it, never.

The party was in full swing: léngé dancers over from Vambolo for a week were showing their talents one last time as a farewell. The léngé dance was an integral part of everyone’s life. It was an important step in the lives of young girls, one which sanctioned their passage from puberty to adulthood by initiating them to the tasks and responsibilities that came with their new lives—culinary secrets, precepts of propriety, and those rules guaranteeing the cohesion and sturdiness of the whole community. The culmination of this initiation was the development of the adolescents’ skills in dance, in corporeal expression. And it was these talents, the ability to unite by movements and games of the body, that the preeminent Vambolo dancers wanted to confirm that day, with their last performance in the country of Ndiada. Their hair was finely plaited, and constellated with multicolored pearls, léngé, and cowrie, the zégé, and fell to their shoulders sparkling like a thousand fires. Meanwhile, their feet were fitted with iron grit shoes called ngbao, producing harmonious tinklings which gave rhythm to their graceful movements.

The euphoria, the rejoicing had hit its zenith. Gbia Ndiada, however, was an indifferent witness to all these exuberant physical manifestations, which sought to bring honor to his court and all his kingdom. The dancers would come again, and they would be welcomed and showered with opulence. Many of them would gladly stay here, if young suitors, attracted by their charms, wanted to make them their wives. The sovereign remained distant, absent, his gaze expressing a vague apprehension that neither he nor his kudu could put into words. The frenzied rolling of the tam-tams, the repeated clapping, saturated the air with echoes reverberating in the distance. Groups of children, mimicking scenes of war, pursued each other, yelling like wild beasts at the edges of the léngé and other dances.

The wind blew lightly, and seemed to conceal some truth, distant, imminent; some misfortune or other hovered in the air, in spite of the euphoric singing and dancing, of the rejoicing. The denouement was not far off; events were about to take by surprise an entire festive nation, its oracles and its warriors.

Then appeared two men, breathless, who burst into the chamber where Ndiada and all his court followed the revelries. They had come straight from the banks of the river. The sovereign stared right at them with an inquisitive glance, the kudu half-rising from their seats, looking preoccupied. Tam-tams, songs, and dances ceased. One of the two men, his lips trembling, his eyes terrified, his features clenched and tense, started recounting, or rather stammering, the tale of his terror. One might have thought he was a woman in childbirth, judging by the sweat that flooded his face, the veins that protruded from his forehead, and the teeth that clasped at each uttered word.

They were at the edge of the river, they claimed, putting down traps when, in the distance, they perceived smoke. It grew thick in shape until it resembled a kind of floating box, which emitted a great quantity of foaming water, and this compact smoke…

The kudu remained motionless. Ndiada nodded nonchalantly; and so the news which he had thought imagined, childish, was coming true? Not long ago the parents of Mobaye-Mbongo had sent messengers to him: they had been invaded and attacked by pale mbombas who came in a floating box that made the waters boil as it passed through. They pleaded for his support to drive them back, but when his warriors arrived, the minions of mbomba had already departed.

What did they want from him? Did they want war? Or do they want to live with him, tired of their eternal sojourn beneath the waters? These questions invaded him, disturbed him, but he soon dismissed them to dictate his commands, ordering rapid mobilization. His court, with its atmosphere of festivity and rejoicing, quickly fell into confusion and panic. Dances, songs, and merry laughter gave way to terror and disarray. Women, children, elders and youths, and even the visitors were hidden in a safe place inaccessible to foreigners. And the superb dancers who had alternated with the visitors to demonstrate, as well, their beauty and dexterity were transformed into powerful warriors. They took position along the shore, down on the grass, ready to pounce, fearsome.