Contemporary Art in Benin: A History in Ten Artists

In the past twenty years, Benin has emerged as one of the most productive sites for artistic activity across Western Africa. A number of leading practitioners exhibit internationally on a regular basis, and with the Meschac Gaba exhibition in the Tate Modern July 2013, the spotlight is firmly on the Beninoise Art scene. 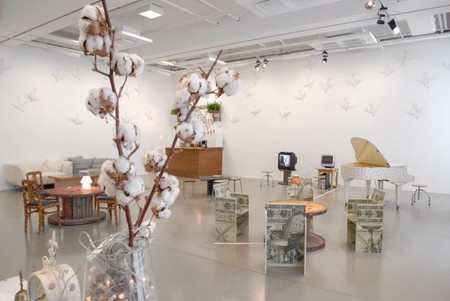 When the Meshac Gaba exhibition opened in July 2013 at the Tate Modern, all eyes looked towards Benin. Yet Gaba is only one of many artists to emerge from the country in the past twenty years, with an art scene that since the late eighties and early nineties, has rapidly developed into one of the most productive and dynamic in the continent. When artists such as Dominique Kouas, Calixte Dakpogan and Cyprien Tokoudagba first started engaging with the contemporary art scene, they stood out in a cultural climate laden with obligations to tradition. Yet these artists paved the way for a number of new artists to break with convention, whilst still paying homage to the past. A vast number of Beninoise artists are now internationally recognised, and further attention to the country’s art scene was gained with the Benin Regarde Biennale in 2012.

In anticipation of the Gaba exhibition, we look at a history of the Benin contemporary art scene through ten of its most influential artists. 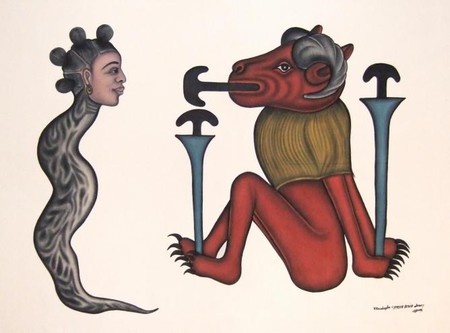 A painter whose career was largely focused on wall paintings, Tokoudagba is credited with restoring the National Museum of Abomey and the Palace of King Glélé, and throughout his lifetime painted a number of Vodun buildings, temples and institutions in his native Benin. His wall-based work — both in fresco and relief — paid tribute to the rich cultural heritage of Beninese and Vodun art, depicting symbolic or religious figures in a distinct style that was at once identifiable for its origins, yet uniquely his own. In 1989 he created a series of non-commissioned works on canvas that freely interspersed the symbols of the King of Abomey, religious iconography, cultural objects and the symbols of the Four Elements. These enigmatic paintings were a departure not towards the secular per se, but perhaps away from specific historical or religious tribute and towards an artistic autonomy in his work. These paintings were exhibited as part of the Magicians of the Earth exhibition in the Centre Pompidou in Paris in 1989, and his canvas-based work was subsequently exhibited internationally until his death in 2012. 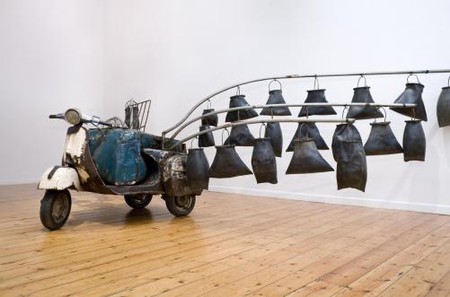 One of the first artists to gain international recognition for his work in Benin, Hazoumè started creating his renowned mask series, composite faces formed from discarded gas canisters, in the mid 1980s. Whilst these sculptures are at first humorous, they point to a darker political undercurrent that Hazoumè has continued to address throughout his artistic career, specifically referring to the underground petrol industry that fuels the Benin economy. Speaking of his reappropriation of the discarded objects, the artist has said, ‘I send back to the West that which belongs to them, that is to say, the refuse of consumer society that invades us every day.’ The found-object piece pictured, Water Cargo (2012), is assembled from a scooter typically used to transport goods around Porto-Novo, transformed to a bird through arms bedecked with rubber water-carriers. Hazoumè’s practice above all combines the everyday detritus of Beninoise life with an aesthetic arrangement that is both political protest and poetic sculpture. 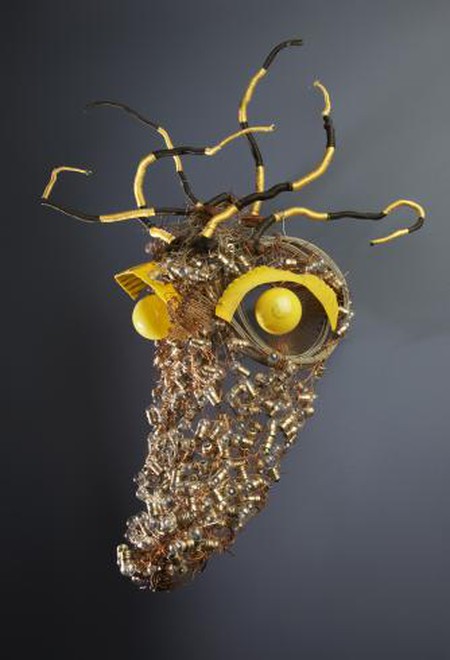 A descendant of the Royal Blacksmiths of Porto-Novo, Dakpogan and his brothers have continued to maintain the royal forge in the Gukonomy section of the city, dedicated to Ogun, the God of Iron. Whilst Ogun is the primary God celebrated by the Dakpogan family, after encountering the works of Hazoumè, the artist began using the forge to produce secular sculptures. These pieces, whilst honouring his Vodun heritage, created sculptural objects that played upon and subverted the aesthetics of cultural convention. Dakpogan’s pieces are largely humorous, though at times disturbing, interpretations of traditional Fon figurative art, and although he still uses the materials of his forebears, the artist often integrates modern-day detritus. CD’s, cassettes, combs and pens all merge to create composite faces or figures that, whilst playful, address the canon of Fon sculpture as a cultural export, proposing an alternative, contemporary equivalent. 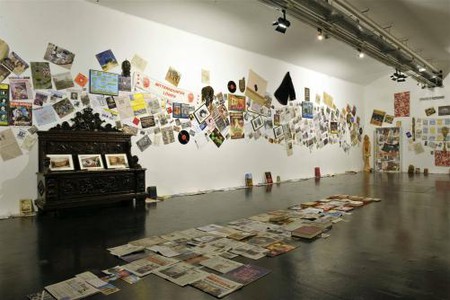 Georges Adéagbo. The Colonization and the History of the Colonized, Exhibition view MAK-Gallery, | © Wolfgang Woessner/MAK, 2009

Uneasy with terming himself as an artist, Adéagbo had no initial intention to bring his installations to the global stage. When he began creating his constellations of objects, his activities were viewed as wayward; indeed, many of his earliest works were destroyed for cluttering up his home; yet a chance encounter with a Parisian curator who had come to see the works of Kouas, Hazoumè et al, allowed Adéagbo to redefine his activity as valid artistic output. Collecting objects from walks begun in Cotonou, then often completed in the country they are being exhibited, Adéagbo compiles collections of the discarded, disposed of and abandoned. These re-appropriated materials, be they newspaper clippings, toys, records, bits of plastic, or unwanted clothing, are then rearranged, their meaning reappropriated as the artist creates installations that have an oblique taxonomy based largely on aesthetic decisions. The new order imposed at once evokes the personal history of the objects, whilst simultaneously creating a new language that transcends their original function or history. In 1999 he was awarded the jury prize for ‘premio della giuria’ at the Venice Biennale for his work in the Campo dell’Arsenale, and he has since risen to become an artist of international repute. 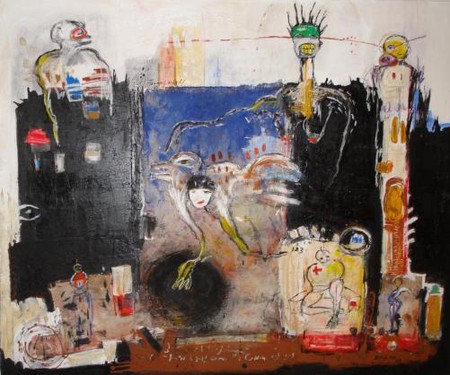 Zinkpè began exhibiting internationally in 1995 though he had been showing work in Benin since 1989. He is most widely known for his sculpture; haunting figures formed of branches and wood. These pieces simultaneously explore the visual affinities between the forms of human figure and the tree, and also the vast history of Fon sculpture that utilised wood to describe the figure. Yet his output extends to painting and installation, and some of his most haunting creations are in two dimensions. These ghostly and distorted figures that emerge from barren canvases prove the swiftness at which the viewer assigns human qualities to a shape. Their crude and distorted forms lie somewhere between the themes of Francis Bacon and the mark-making of de Kooning, whilst exploring narratives aligned to his native Benin. 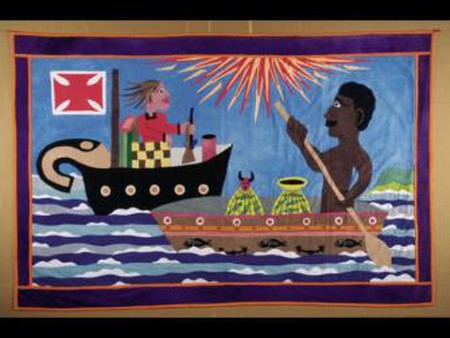 Born in 1952 to a French mother and a father from the Guin-Mina people from the coast of Togo-Benin, Wilson grew up in Orléans and studied philosophy and anthropology in Paris. He later returned to West Africa to explore his heritage and began as a self-taught artist in 1973. As such, Wilson’s career trajectory perhaps lies outside the Benin art scene as a whole, yet his painting, drawing and installation is heavily influenced by his Beninese roots and explores the long, horrific past of the slave trade that so shaped the history of West Africa. For his installation The Black Ocean at the Library-Media Evreux in France this year, the artist created appliquée hangings fabricated using the traditional methods of royal art in the kingdom of Dahomey, whilst his recent VODOONs series pays homage to the forms and appearance of Vodun art and iconography. 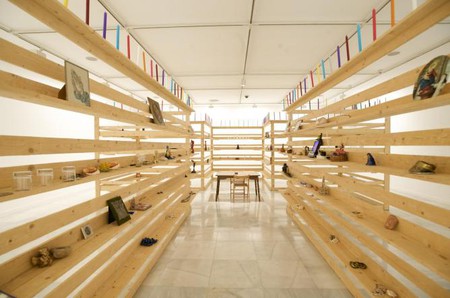 With installations heavily imbued with the visual cues of western Postmodernism, Gaba’s vibrant, humorous installations form a distinct rupture from the found-object sculptures of his forebears. His latest exhibition at the Tate Modern, titledMuseum of Contemporary African Art 1997–2002, features a vast 12-room installation, which was compiled and constructed over a five year period during a residency in Amsterdam, contains a number of found objects — including paintings, sculptures, religious objects and musical instruments — arranged as a West African Market. Yet this is a West African Market that has been filtered through the aesthetics of the Western Museum, and Gaba’s complex and multi-layered exhibition also explores the museum experience, social interaction and the seeming divide been the encounter with Art and the encounters of everyday life. Further extending his oeuvre to relational aesthetics, four artist-led dinners will take place in the Museum Restaurant section of the installation; at once an enjoyable event for participating diners and an examination of the boundaries between artistic and quotidian event. 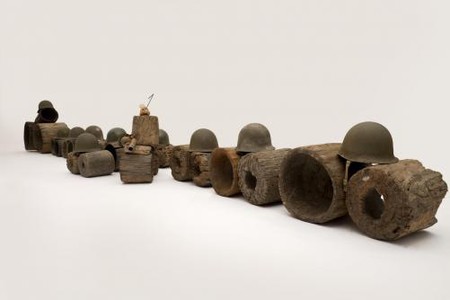 Somewhere in the intersection between Dominique Zinkpè and the Chapman brothers lies the work of Gérard Quenum. Disturbing sculptures formed of composite found objects are marked by Quenum’s use of discarded parts of dolls, creating new, bizarre figures that often find autonomy through a bare minimum of human references. Many sculptures imply a narrative or evoke a scenario, whilst others are more aligned to the creation of a particular character or gesture. His use of materials is deceptively simple, and the subtle nuances of each piece rely on his uncanny use of discarded objects. Speaking to BBC Africa of how his cultural heritage informs his practice, Quenum said ‘In voodoo everything spiritual is rooted in matter, so the material is very important in Benin. When I see something, I also see something else within which lots of people can’t see. Contemporary art is all about matter, and taking it, in a way, to a spiritual level.’ 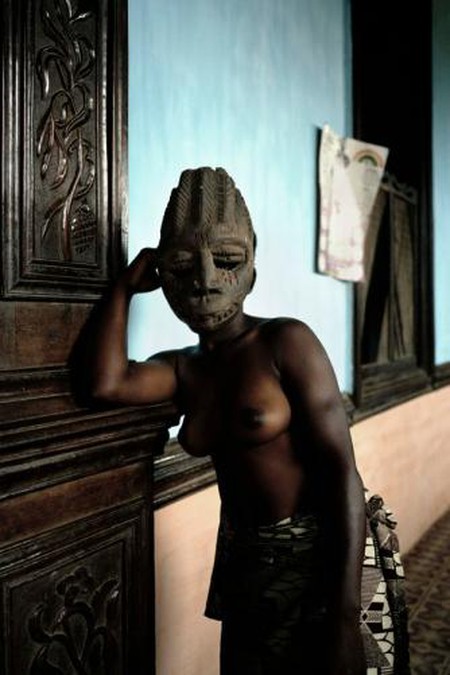 One of the leading fine art photographers in Benin, Agbodjelou has assumed the family trade, having trained in photography with his father Joseph Moise Agbodjelou (1912-2000). Yet the artist has subsequently built up a style that is uniquely his own, creating complex portraiture that is as much an examination of the history of Porto-Novo as it is a character study of its subjects. His Vodou series (2011) documented spirit healers wearing traditional costumes that, while absorbing some external influences, has remained largely unchanged for centuries. Shot in vivid colour, the images create an uncanny timelessness through subjects who could have been shot 150 years ago, alluding to anthropological photography taken by western colonialists whilst simultaneously paying tribute to a religious heritage that has remained staunchly unchanged. For his more recent Desmoiselles de Porto-Novo series (2012), he shot native Porto-Novo women in the artist’s home, a grand colonial mansion that instantly speaks of the city’s westernised history. Shot wearing Vodun masks, and bare-breasted as traditional village life would dictate, their seeming incongruity in the building instantly evokes the uncomfortable integration of western and Beninese cultural traditions. The title, an allusion to the famous Picasso painting Les Desmoiselles D’Avignon depicting nude prostitutes, further emphasizes the sinister undertone of the photos, bespeaking the western sexualisation ingrained within Exoticism.

Rafiy Okefolahan is part of the new generation of Beninese artists. A painter, his rich and sumptuous canvases with their vibrant colour palette evoke the American Abstract Expressionists, though on closer inspection the crude suggestions of figures or animals could allude to Vodun forms. Moving from Benin to Togo, then on to Nigeria, subsequently settling in Senegal to study at the National School of Arts in Dakar, the artist recently held a show in the Lazarew Gallery Paris that paid testament to his nomadic past, his Beninese home, and the location of the exhibition. It is not uncommon for Beninese natives to be spread far and wide; thus, the mobile phone becomes a crucial means of contact between family members and it is regular practice to write the telephone numbers of loved ones on their walls to remember them. In stark contrast, Okefolahan observes that the numbers found on the walls of Paris are invariably those of classified ads; destined to be cut off, offering only the most tenuous and somewhat sleazy of relationships. Okefolahan included these Paris telephone numbers across his paintings, creating the suggestion of an intimate bond between the owners and the artist, but also further highlighting the recent global default to assign one’s telephone number as integral to one’s identity.