A History of Female Empowerment: The Mino of Benin

In Greek Myth, the Amazons were a terrifying group of women. As a matriarchal society, the women governed and fought, whilst the men performed household tasks and served to impregnate their superiors. This tribe is a fantastical myth, yet their namesakes, the ‘Dahomey Amazons’, were decidedly real, a brave and terrifying all-female militia who ferociously fought for and defended the country of Benin, then known as Dahomey. 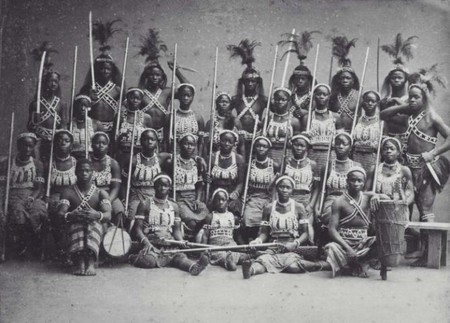 Some think the name derives from ‘a-mazos’ (‘without breast’), as they cut off their right breast in order to better throw javelin; others think that its origins are found in the Iranian word ‘ha-mazan’, or warriors. In many versions of the Greek legend, men were not part of society at all, except for the rare occasions that Amazonians deigned to copulate with them in order to prevent their race dying out. Boys born to the Amazons were killed immediately. Subverting the imbalanced gender roles that have hampered many societies, it is clear that under Amazonian doctrine, it was the women who ruled.

The Amazons were a myth, a terrifying evocation of female domination believed to derive from male fear of female empowerment. No equivalent has ever been seen in Western culture. Indeed in the majority of societies, women have only been permitted into army ranks very recently. But from the 18th to the early 20th century in Benin the armed forces were led by the Mino, a fierce all-female army tasked with guarding the palace, royalty and fighting for the territory of Benin, then known as Dahomey. When European colonialists and missionaries encountered these women, they swiftly gained the nickname ‘the Dahomey Amazons’. While they shared few of the traits of their mythical counterparts — no self-mutilation for better aim; nor ideological male infanticide — they remain the only known army corps in world history populated exclusively by women. 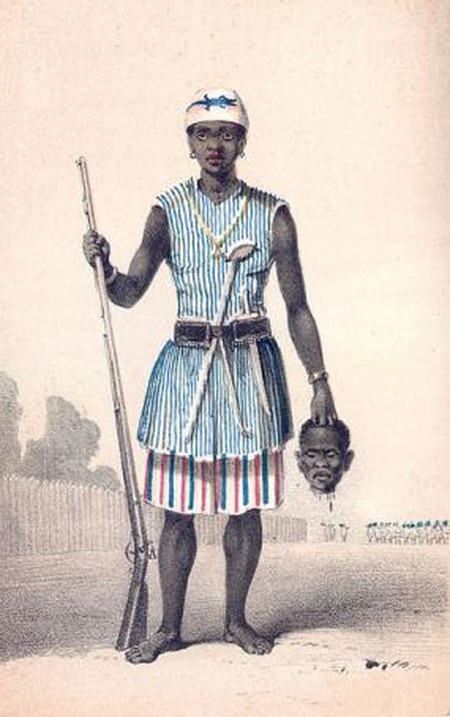 The word ‘Mino’ means ‘my mother’ in Fon, yet looking at images of these female warriors, there is little in their countenance to suggest the maternal. Their origins are unclear, though popular theory suggests that they were initially formed under the rule of King Wegbaja in the late 1600s as a group of elephant hunters. Then in the early 18th century, his son and successor King Agaja found himself impressed by their ferocity, and decided to employ them as members of the palace guard. Starting as a group of 800 soldiers, their troops rapidly expanded and with it, their responsibilities. Soon there were over 4000 female soldiers successfully fighting the territorial battles of Dahomey. In the 1850s, under the rule of King Gezo, the Mino numbered roughly half the armed forces of the kingdom at around 6000 women, and their superior fighting skill allowed Gezo to conquer the entire territory known today as Benin, along with most of Nigeria.

The women were recruited from a variety of sources: some were volunteers, either fleeing poverty or the necessity for marriage, or seeking glory on the battlefield. Disobedient and impetuous daughters could also be conscripted by their fathers if they showed a willful streak better suited to fighting than motherhood. Indeed, once a member of the Mino the women were forbidden to have sex lest they fell pregnant and were unable to fight, and any man who tried to touch a soldier would be sentenced to death for his crimes.

As a fiercely competitive corps in the Dahomey army, the women trained rigorously in competition with the other male troops. Their determination to be the strongest saw trials of stamina far greater than their male counterparts: notoriously, they were required to scale a wall covered in thorn hedges without showing pain as demonstration of their endurance. With the fighting motto of ‘Conquer or Die’, training also involved rapid desensitizing to killing and death. Prisoners of war would be armed with clubs, then the Mino would be set on them to see how many they could kill. Another Dahomean military custom for new recruits of both sexes was to throw prisoners of war off an elevated platform to the ground below, where a baying mob awaited to finish off the unfortunate. Their ferocity in training was matched by a ferocity in battle, and there are numerous stories of the savage acts carried out by the female soldiers. How many of these visceral tales are entirely true, and how much the result of embellishment, will perhaps never be known.

When the ‘scramble for Africa’ began, and France established the colony of Porto-Novo, it was clear their invasion was unwelcome, and the Dahomeans would not go quietly. Animosity between the colonial French and the Dahomey escalated to a full-scale war in 1890; many oral histories recount that this conflict was sparked by an act committed by the Mino. The female militia attempted to seize back a Dahomean village that had fallen under french rule. The chief, however, had come under the sway of the colonialists and attempted to diffuse the situation by persuading the inhabitants that the tricolore would protect them. Following the orders of her general, one Mino fighter then decapitated the chief and carried his head, wrapped in the flag, back to the Dahomey King of the time, Béhanzin.

Yet whilst their bravery and ruthlessness were grudgingly respected by their French opponents, the Mino were no match in scale or weaponry for the French troops, and after a second Franco-Dahomean war, France gained victory over the Dahomey in 1894, marking the beginnings of a European colonization that lasted until the country’s independence came in 1960. The Mino militia, no longer in requirement, naturally died out. Reports are mixed as to when the last ‘Dahomey Amazon’ died; some say 1940, others as late as 1979. Their history may remain somewhat unclear, veiled by the ambiguities of national oral history, and no doubt, the exaggerations of the colonialists. In many ways, the Mino have become a sort of legend, an emblem of female empowerment; yet unlike their Greek counterparts, this unique army corps was once a reality.