The 10 Most Important Venezuelan Artists 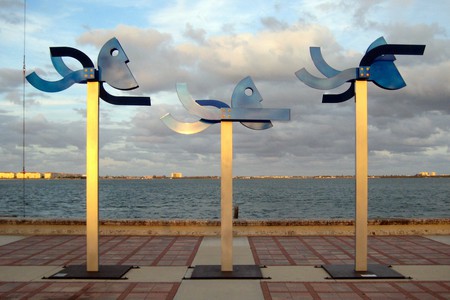 Jorge Blanco's 'In the Swim' in Florida | © Wally Gobetz/Flickr

Initially dominated by religious iconography in the 19th century, Venezuelan art succumbed to the influence of modernism in the 20th century with later practitioners establishing their own Latin American version of modernism. As these ten artists reveal, Venezuela has become synonymous with a wide spectrum of artistic endeavour which is both uniquely Latin American and worthy of comparison with the best international art.

Jorge Blanco is an artist from Venezuela who emigrated to the United States in 1999. Irreverent and unconventional, his works are placed within public sites in the United States, Venezuela and Japan. Blanco’s early training was rooted in industrial design and in 1970 he graduated from the prestigious Neumann Institute of Caracas in Venezuela, before going on to study at Rome’s Academy of Fine Arts where he learned of artists such as Klee, Herbin, Calder and Miro who came to have a definitive influence upon his later work. At the end of the 1970s and early 1980s, his comic strip El Náufrago won international acclaim for its refined humor and poetic philosophy. His sculptures retain this mentality, and Blanco has experimented with Lycra, rope, wood, bronze and mirrors within his work, and in 1992 began to explore color and metal as primary material. The sculptures, which are scattered across several parks in the USA, have are geometric studies and interpretations of his own internal world. 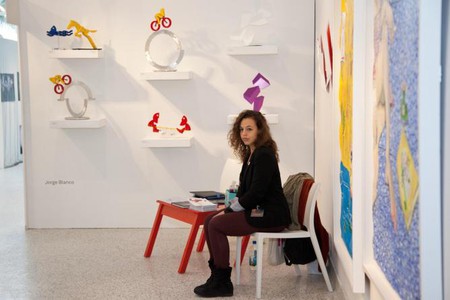 Born in 1943, Paul del Rio is a Venezuelan painter and sculptor. The artist embraces modernism, surrealism and cubism within his works as a means for social commentary upon the harshness of urban life upon ordinary people. Originally born in Spain, his family moved to the capital Caracas in Venezuela in the second year of his life. In 1996, the artist began to illustrate political cartoons under the pseudonym of ‘URBA’, as a means to express his own political views and opinions through the medium of art. Recovering his Venezuelan nationality, he began to successfully exhibit his work through several international exhibitions. From 1974 to 1993 his work has been featured in galleries in Spain, Japan, Finland, Colombia, Romania and Mexico, amongst many others. One of his most famous works is the bronze sculpture Mano Mineral, (meaning Mineral Hand) which was commissioned by order of Juan Pablo Perez Alfonso. 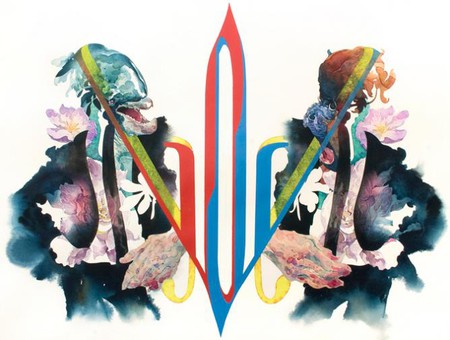 Hermann Mejía is a Venezuelan-born painter, illustrator and sculptor. Now residing in Brooklyn, Mejía’s illustrations frequently appear in the American humor and satire publication MAD Magazine. From an early age, the artist was interested in drawing — specifically comics after collecting them as a teenager. Magazines such as MAD had made their way to Venezuela from America, and the influence of commercial art was significant to Mejía. After studying at the Caracas Design Institute, he began a series of Venezuelan postage stamps commemorating the Pope. He then started entering art contests, and won the opportunity to meet George Pratt — one of the artists in the competition. Pratt introduced him to New York City with a trip to the DC Comics offices, and Mejía began to receive work instantaneously. One of the most successful and prolific illustrators, he has received awards included the ‘Best in Magazine Feature’ and the Reuben Award from the National Cartoonists Society in 2003.

Julio Aguilera has been described by art critic Ed McCormack as ‘more [significant] than any other artist in the Hispanic Diaspora…bringing new blood, so to speak, to that still vital tradition’. Unashamedly influenced by Pablo Picasso, he also brings the artistic practice of creatives from France, Italy and northern Europe into his work where he applies these practices to Latin American subjects. Born in 1961 in Caracas, Julio César Aguilera Peña attempted several failed business ventures before moving to the USA and devoting his professional career to painting in 1997. In that year he bought 50 canvases and developed his now famous ‘Blue Series’. Utilizing the public promotional tools of web forums and the Venezuelan Consulate in New York — the series became a renowned success. By 2000 Aguilera’s paintings had been exhibited in Argentina, Spain and Venezuela in several sold out shows and he has been celebrated as the new face of Latin American art. 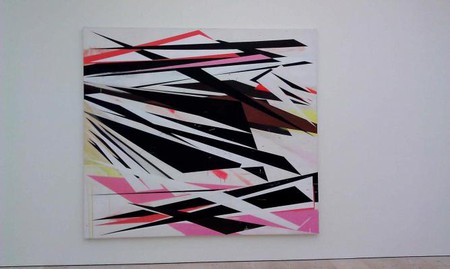 Now living in London, Jaime Gili is an artist from Caracas born to Catalan parents. Since 2002 his work has been widely recognised as contextualising and continuing the tradition of Latin American abstract art, particularly the kinetic work of artists such as Carlo Cruz-Diez and Alejandro Otero. Citing his country’s rapid oil-rich economic growth and intensive South American visionary developments such as Caracas and Brasilia, Gili’s paintings address this utopian new world optimism and its inherent failure. Art critic Jerwood Space has described the work of Gili as mixing ‘Pop, Minimalism, Vorticism, Futurism and graffiti art’. After receiving his MA in painting from the Royal College of Art in 1998, Gili completed a PhD at the University of Barcelona with his thesis exploring ‘Repetition and Seriality in Painting since 1960’. His work has been displayed internationally in many exhibitions. The artist also recently won an international competition for one of the world’s largest public art projects — at 25,000 square meters (270,000 sq ft) — painting 16 large oil tanks along the Fore River in South Portland, Maine, with a site-specific design.

Balthazar Armas is an established Latino-American artist and his native Venezuela is a prominent presence throughout his work. Born in Caracas, he began as a self-taught artist during the 1950s and went on to study at the Neumann Institute of Graphic Arts and the Centre of Graphic Studies (CEGRA). Armas is now considered one of the pioneers in the contemporary figurative art movement in Latin America; a style which embraces the industrial and urban influence within painting and makes them more approachable and distinguishable to the viewer. Armas’s works are characterised by vivid expression and intense colours which create a powerful and consuming vision. The artist has participated in many design, engraving and art exhibitions throughout Latin America, the United States and Europe, including at the MOKA Gallery in Chicago, Illinois. The recipient of many recognitions and awards, institutions such as the Havana Biennial, Library of Congress, Art Museum of the Americas and the Pratt Institute have all honored Balthazar Armas and his works. 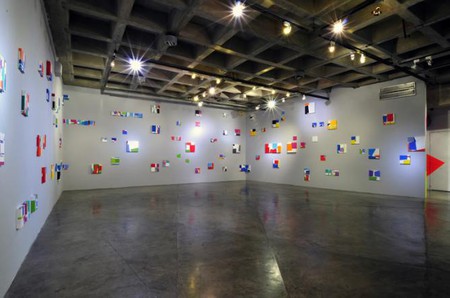 Patricia van Dalen is a renowned Venezuelan painter and visual artist. Journalist Rafael Osío Cabrices has described the work of van Dalen as a ‘journey of exploration through an alternate country made of light spears and colored shrapnel. A country that reveals itself in numerous glimpses; a country that is neither homogeneous nor boring: there are jungles and cities on it, clear skies and almighty tempests, quietude and violence.’ This sense of location is something that van Dalen brings to her extensive body of works on both canvas and paper. The artist has also created several temporary installations in public spaces, some large-scale in Brazil, Spain, United States and Venezuela. Fragmented Light (2011), was created especially to be exposed in the Miller Learning Center at the University of George, USA. Van Dalen has been a professor at the Institute of Design IDD Foundation and the School of Architecture at the Central University of Venezuela, and often teaches color workshops in various educational and cultural institutions.

Frederico Brandt was a Venezuelan painter who was born in Caracas in 1878 and died in the same city in 1932. Brandt’s paintings gather the best traditions of modernity: an internal luminosity with his use of light, the characters and forms which are present within his paintings and his idea of structure and variation. His compositions rise from simple abstract constructions connected by free strokes of thin lines. At the Academy of Fine Arts as a solo artist, Brandt became a researcher in the works of Paul Cézanne. The effects of this modern master and Joaquin Torres Garcia (a painter and modern art teacher, recognized as one of the important personalities of Latin American Modernism) are inescapable throughout Brandt’s works. Torres Garcia enforced within his students the exquisite creation that was Latin American Modernism, and this can be seen best in the works of Frederico Brandt. As technically accomplished as abstract expressionism in New York, Latin American modernism also simultaneously borrowed a European style that was expressive of a New World culture. 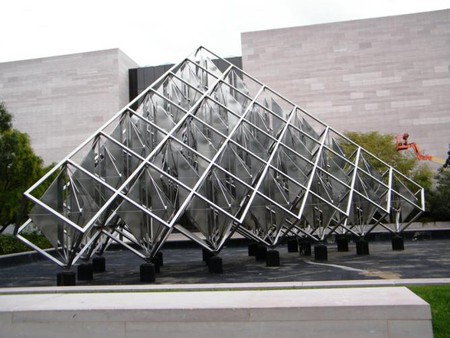 As one of the founding members of the artistic movement the Los Disidentes group, Alejandro Otero was a pioneering painter of geometric abstraction, a sculptor and also a writer. After studying in Caracas, Otero travelled to New York and Paris where he discovered cubism, and which inspired a revision of his work prior to Los Disidentes. He produced some of his most important pictorial series in Paris, including Las Cafeteras painted between 1946 and 1948. This marked transition from representation to abstraction, revealed at the Museo de Bellas Artes in Caracas in 1949, is credited for beginning a new era for Venezuelan painting. These paintings caused a critical uproar in the culturally conservative Venezuela and ultimately helped trigger the emergence of modernist abstraction in Venezuela. The Coloryhthms series created between 1955-1960 also broke boundaries in relation to artistic spatial awareness. The works proposed the notion of the plane as a spatial field of forces in constant expansion, functioning simultaneously as immersive painting, volume and architecture.

Considered one of the most accomplished and a prolific artist of Latin America, Jacobo Borges is a contemporary, neo-figurative artist who experiments in a variety of creative mediums. His curiosity as an artist has lead him to explore the avenues of paint, film, stage design and plasticity. Renowned for his ever-evolving style, the consistent principle that unites his work is ‘the search for the creation of space somewhere between dreams and reality where everything has happened, happens and may happen.’ His canon of work includes an astounding body of paintings — from fauvism in his earlier work to the later abstraction and neofigurative. He also directed a film in 1969, and later published a book entitled The Great Mountain and Its Era in 1979. Commenting on his painting technique, Borges remarked, ‘paintings come up like the dawn, light changes, fades and modifies. In fact, a painting is many paintings and the total dwells within me. I feel buried, hidden, non-existent images, things that we can’t see any more.’