Uruguay’s Different Grilled Meats and Where to Try Them 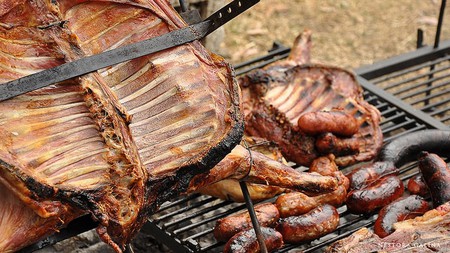 Uruguayans have a great food tradition. Getting together for a meal is a custom that symbolizes family, friendship, comfort, and care. One of the most typical meals to enjoy together is the asado—a variety of meats and vegetables on the grill that people eat by snacking on at different times throughout the meal. Learn all about what constitutes a good asado and where to try it.

There is one designated person in each asado that holds a great responsibility: turning on and keeping the fire, and cooking all the delicious products on the grill. Just turning on the fire can be a complicated task for many, and knowing the right amount of coal to put under the grill for each food and keep up with their respective cooking times is a masterful task. This is why the asador is a respected figure, and once an asador has been selected in a group it’s usually going to be that person for every asado. 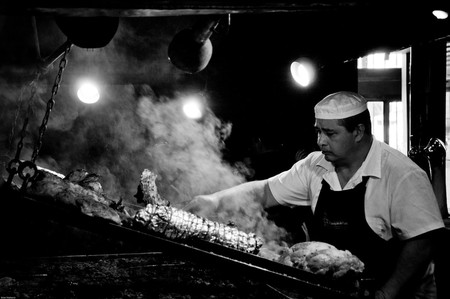 The first things that go in and out of the grill are called picada, which means something like “to snack on,” which is literally what people do with these shared delicacies. A crucial element of the picada is bread—which is usually a baguette or garlic bread—because most things in life are best enjoyed with a piece of bread. A good picada also can’t miss out on:

Chorizo is a typical Uruguayan sausage made of pork. It’s short and thick, unlike salchicha which is long and thin. You can also get specialties like red chorizo and salchicha which are spicier, and other varieties that have cheese inside. They are best enjoyed with a piece of bread, mayo, and tomato. You can have them cold the next day but never raw—they are not salami. 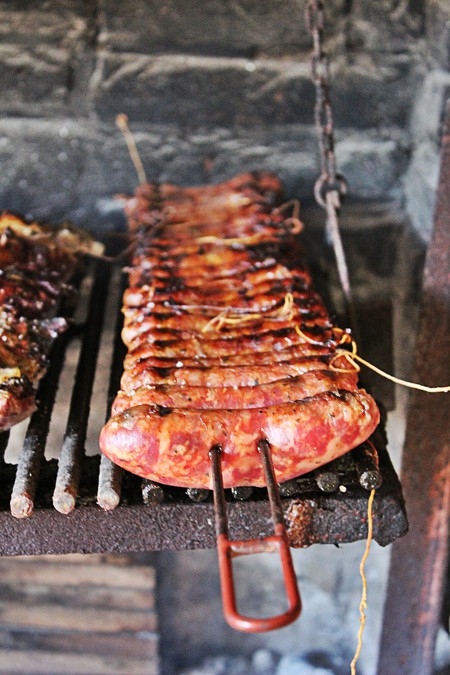 This is a special kind of cheese that is melted on a little iron pan on top of coals under the grill. Depending on the brand and how people cook it, it can go all melted or with a cheese crust at the bottom and melted on top. Either way it’s delicious and people usually fight for the last pieces of this cheese. You can eat it on its own or with a piece of bread, or accompanying any of the other elements of the picada. 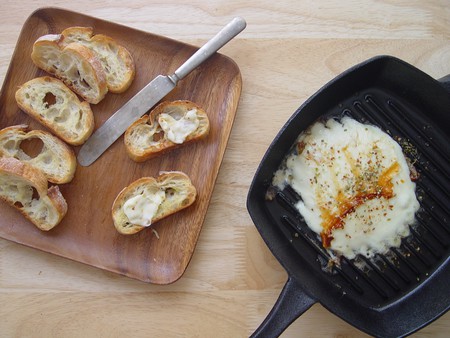 Morcilla is basically a blood sausage. Even though this doesn’t sound very appetizing it’s a really tasty dish. There’s sweet and savory morcillas, and usually someone that really likes one doesn’t like the other. The sweet ones usually have raisins; you can also get specialty savory morcillas with nuts and olives which is amazing. They’re best savored with a piece of bread and you can also have it with a piece of provolone cheese. 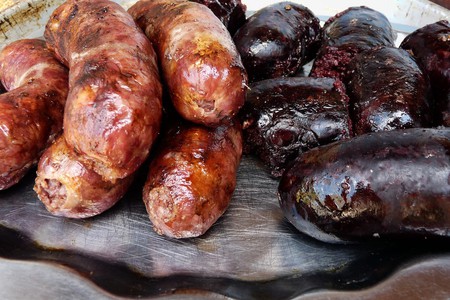 This is the global name for various cuts of meat that are actually organs, most usually from the calf but can also be from other animals. Depending on the tastes of the group of people making the asado, some achuras are more popular than others, but the main ones are molleja and chinchulin. Kidney and liver are also common but not so much.

These are the calf’s thyroid glands. No one knows who first thought of grilling calf glands but it’s delicious. The meat is quite fatty and soft, and tastes great with lemon and a piece of bread. 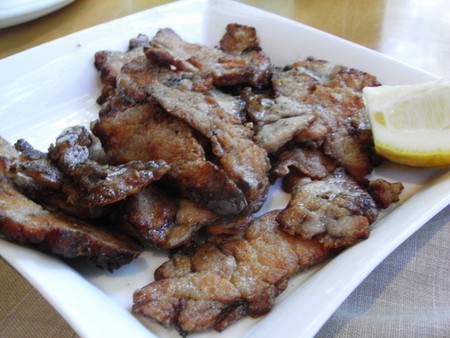 Many people don’t like this because of where it comes from: chinchulin is the calf’s small intestine. Bear in mind that they’re obviously cleaned before cooking and there’s not much in a calf’s small intestine other than milk, but it can still be unappealing for many. It’s actually delicious, but people either love it or hate it. It’s very hard to grill because the texture can turn very rubbery if not cooked right. It’s also best enjoyed with lemon juice and a piece of bread. 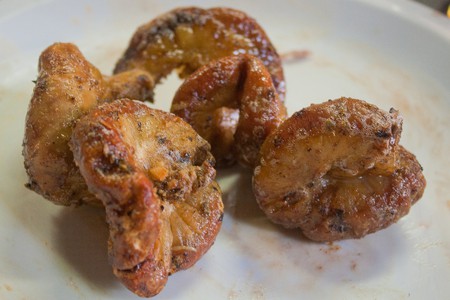 The one meat that can’t be missed is beef, because it’s the most traditional and iconic to Uruguay. Uruguay exports some of the best quality beef in the world. Usually people buy a cut called colita de cuadril, which is the rear, very soft, lean, and juicy without bone. Another popular cut is asado de tira, which is the meat next to the ribs and comes with bone. It’s really tasty and quite fatty. Other meats to have on the grill are matambrillo de cerdo, which is a delicious pork cut, quite fatty, and amazing with lemon. You can also have lamb rack and chicken on the grill. 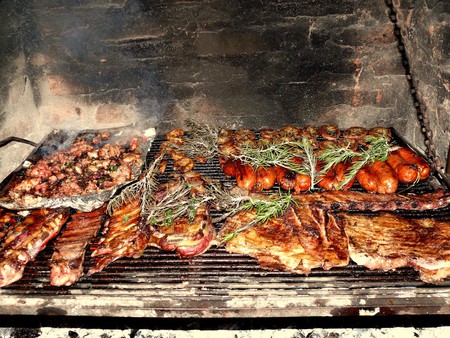 Now that you know the basics, remember that the best asado is whatever you make of it. You can try great asados at these venues:

This is one of the prime spots for good asado in Montevideo. You can sit close to the grill and ask the asador everything about every cut of meat and achuras, they will be happy to guide you through their entire menu. 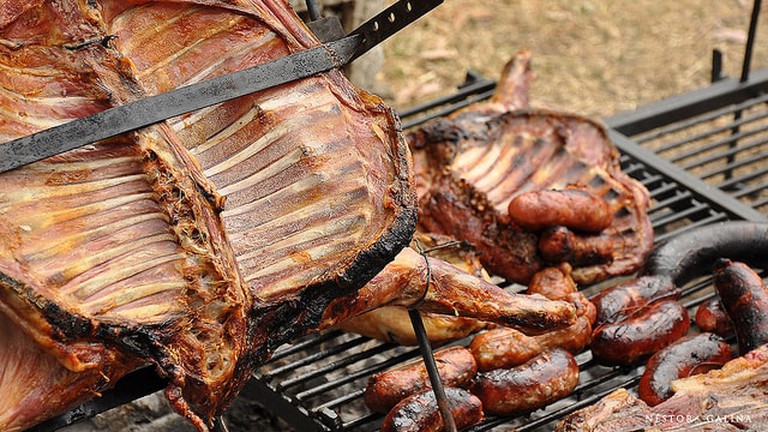 Asado, meats on the grill

This is a classic in the Carrasco neighborhood, a nice area in the suburbs with lots of greenery, and next to the coast. It’s a great place to go walking around on a day trip, and end with an asado in Garcia. The waiters are very friendly and casual, and you will hear some traditional Uruguayan music. 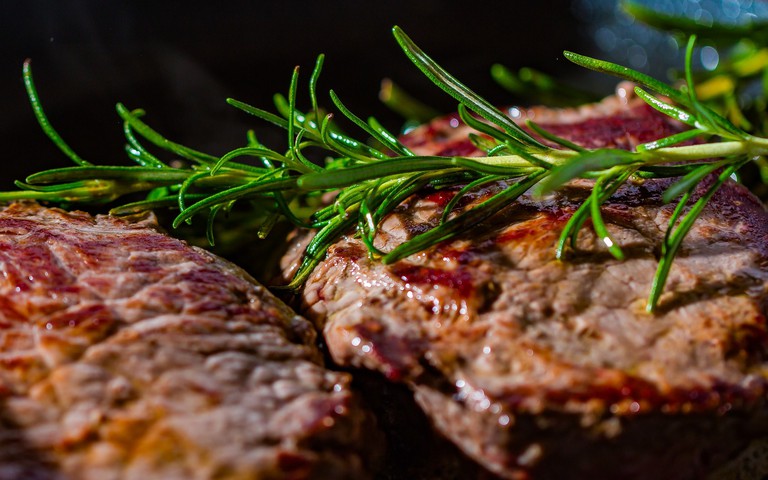 La Perdiz is another staple in Montevideo City. They offer a wide variety of dishes as well as the classic barbecue, and they are all amazing. Here you will find some of the best tasting food you can have in Montevideo. 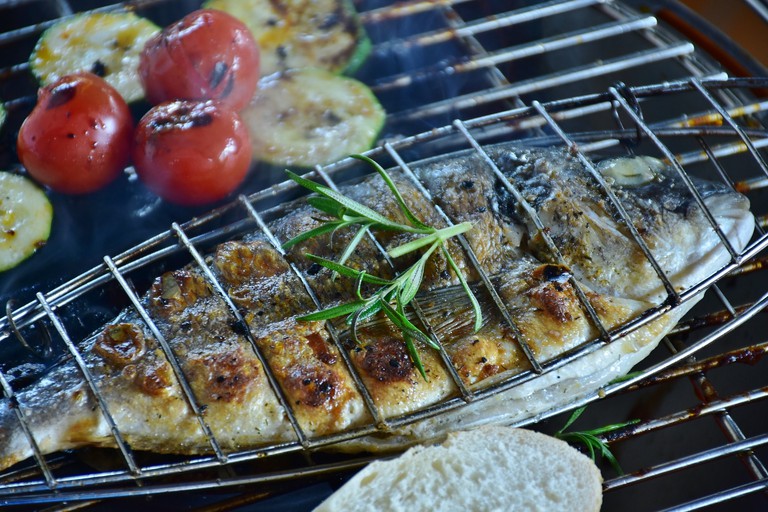 Located in Ciudad Vieja, the “Old Town” neighborhood, this restaurant is emblematic to Montevideo. Here you can have amazing grilled platters to share, made up of fish and seafood, or grilled beef and meats. It’s ideal for trying different traditional Uruguayan foods. 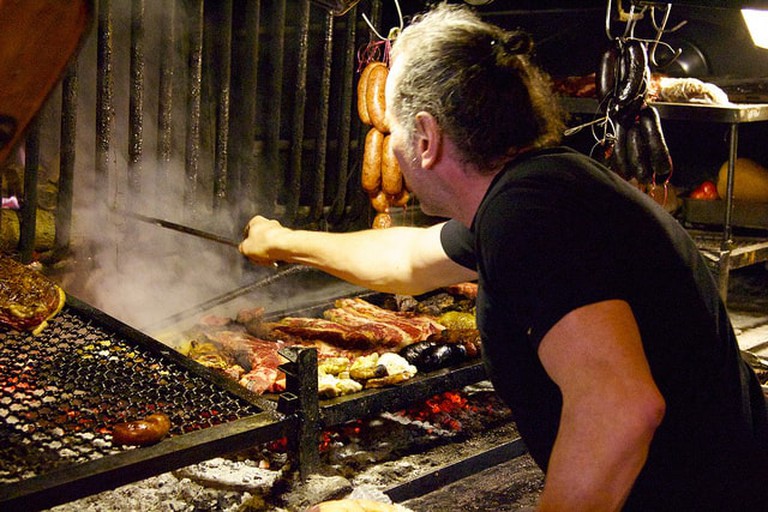 This place gets very busy and loud, because its kitchen and barbecue are very popular. The indoor design is stylish, quite different from the traditional barbecue places all around Uruguay. This is many locals’ favorite, and is good if you want to avoid the more touristy restaurants.

Fine Dining, Gourmet
Give us feedback