The Most Beautiful Buildings in Punta del Este

Despite being founded at the beginning of the 16th century, Punta del Este has only recently become a bustling hive of international acclaim. It is now a center of international investment and spending, as well as remaining a prime destination spot for some of the more wealthy Uruguayans and neighbouring countries. The combination of a picturesque location and a seemingly endless influx of money has led to development and construction of some of the best buildings around. Here are some of the most beautiful.

Playa Vik is a dreamy destination spot that inspires curiosity and imagination for all who have the good fortune to behold it, built as it is into and out of the surrounding land by none other than the renowned Uruguayan architect Carlos Ott. It has walls of windows with glass spanning from floor to ceiling, and a growing natural roof garden. Positioned on an outcrop by the coast of José Ignacio, the preferred destination of the elite, there is an infinity pool angled off to the endless Atlantic. Playa Vik has a jaw-dropping design outside, and out-and-out luxury inside. A must-see in Punta Del Este. 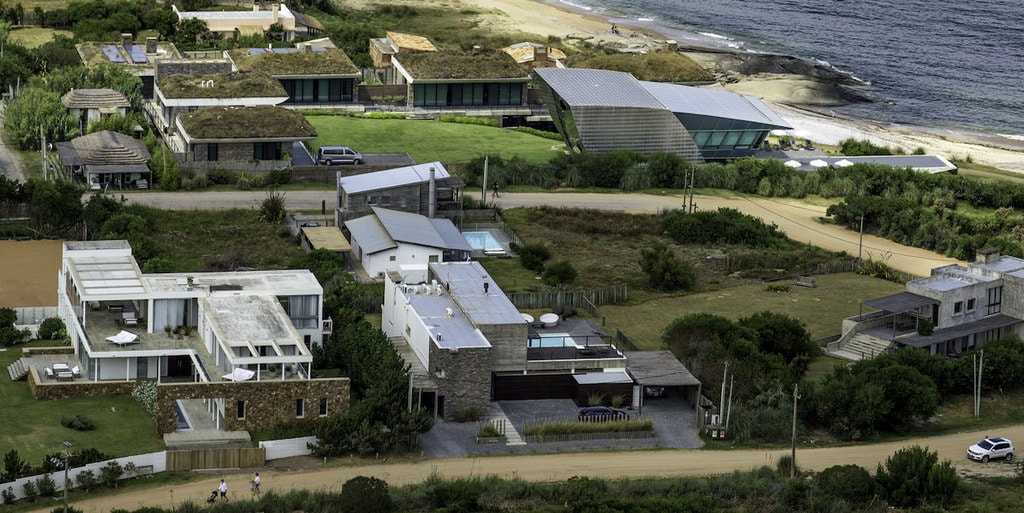 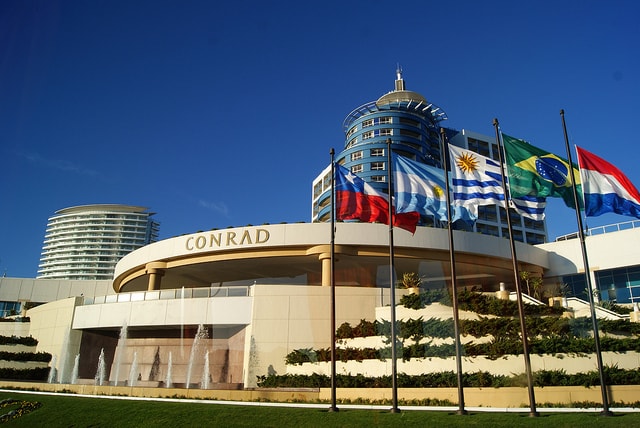 Conrad is as impressive a building as it is unmissable, and an icon in Punta del Este. When travelling from the capital, Montevideo, or the local airport near Punta, you are bound to pass by the grand, beachfront entrance to this hotel and casino. The central tower that reaches for the sky is circular, its lower tiers jotting out towards the beach, while its higher tiers loom overhead. On either side are parallel rectangular towers that protrude backwards like wings. The three pieces of this splendid jigsaw meet on a raised platform with a garden, and a terrace above the pedestrian entrance.

This building is a fusion of classic and traditional design that creates an array of interesting and unique details that would seem out of place anywhere on earth but Punta del Este. The wooden and Tudor façades of the building would be enough to pique the architect in you and give this five-star hotel your nod of passing appreciation. However, the highlight of the building is its single tower, the Torre de Agua, ruling high above the neighbourhood. 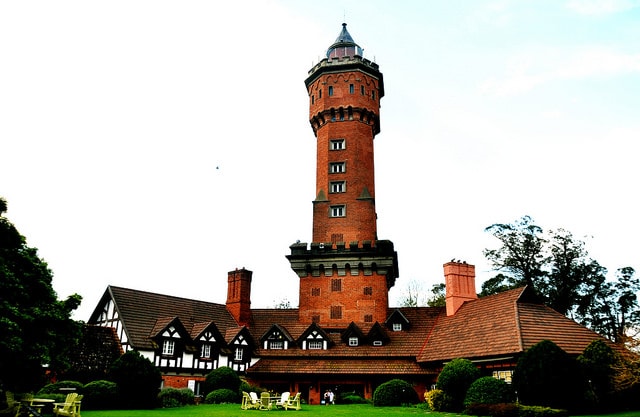 Although smaller than the other buildings on this list, Casa Zinc is as unique as the grand Hotel Conrad or intriguing Playa Vik. It is a small boutique hotel, as minimal as it is charming, built by Aaron Hojman, who owns a nearby vintage shop in the locality of La Barra. Hojman furnished each of the rooms on the philosophy reduce, reuse, and rRecycle. The ‘posada’ was created using completely recycled materials and features corrugated iron, faded wood, and whitewashed furniture, as warm as it was before it was used for the first time.

The ‘Church of the Mullein Leaf’ is a lovely little parish found on the peninsula of Punta del Este. Originating as a roman catholic church, standing at the end of the treacherous coastline along the south-easternmost point of Uruguay. The parish is named after the Virgin of Candelaria, and there is a beautiful shrine for her, right on the edge of the ocean opposite the church, that you cannot miss. It is a long building of a bright sky-blue that reflects the beautiful interaction of the ocean and sky. Atop lie earth-clay tiles reminiscent of the Mediterranean. 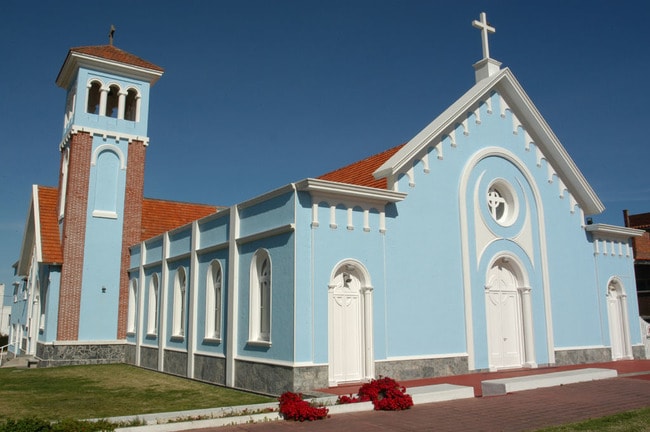 Viña Edén is a place of splendour, relatively far removed from the actual city of Punta del Este, on top of the Garzón hills that overlook the Atlantic. It is a splendid vineyard surrounded by countryside, with hills and valleys paving the way towards a wondrous square building close to the top of a hill. The south-facing wall, where you can find the restaurant and waiting area, is floor-to-ceiling glass and one of the best places in the country to see the sunset and sunrise. This ecological building and environmentally conscious company is one of the most advanced and significant of its kind in Uruguay. 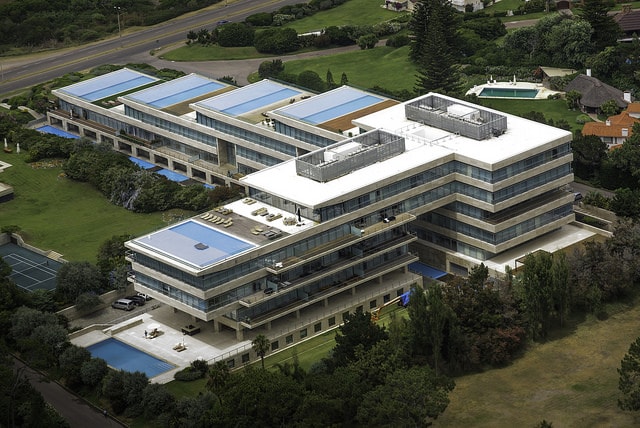 The Acqua building, designed by the renowned Uruguayan architect Rafael Viñoly, is as unique as a snowflake and as beautiful as your own reflection when you look down into a pool of crystalline water, which there is no shortage of in Acqua. Located right next to the popular Brava Beach, it’s a beautiful retreat of tiered swimming pools that appear like they are climbing over one another in some attempt to escape to the ocean. Each tier in this six-storey deluxe residential complex contains rooms and facilities of the highest quality. Each room has a private pool, but it’s on the penthouses that lies the infinity pool of your dreams.

Casapueblo was designed by Uruguayan artist and architect Carlos Páez Vilaró, who was immensely inspired by the buildings on the Greek Island of Santorini and the nest of the famous local bird, the rufous hornero. Casapueblo is internationally known as one of the most awe-inspiring and eccentric buildings Uruguay has to offer. This is no surprise considering its insides feel like a labyrinth of vast depth and height, covered with intricate details that escape the eye at first sight. Thirty-six years in the making, this hotel and museum is a masterpiece of architecture and engineering. 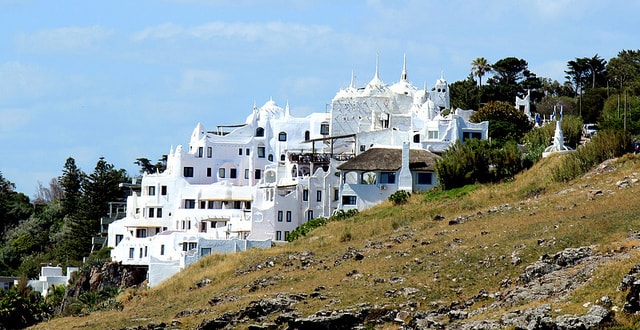