A Tour of Uruguay’s Statues and Sculptures 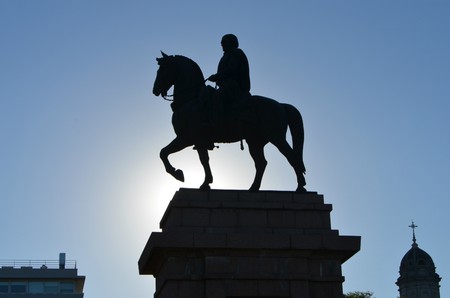 Uruguay’s turbulent history is full of enigmatic figures who played fundamental roles in the founding of the nation as it exists today. That, coupled with a vibrant arts scene, means that the country is littered with impressive monuments, all with a unique story to tell. Join Culture Trip on a tour of Uruguay’s most significant statues and sculptures.

In the glittering city of Punta del Este on Uruguay’s south coast is the country’s most well-known landmark: La Mano. A giant concrete hand rising from the sands of Playa Brava, it was designed by Chilean artist Mario Irarrázabal and has drawn hordes of onlookers since its completion in 1982. It’s meant to warn swimmers away from the powerful waves at surf-friendly La Barra and point them towards the balmy waters at Solanas in the opposite direction. It’s a popular photo spot in the summer months, with crowds of well-heeled Brazilian and Argentinean tourists jostling to take selfies. 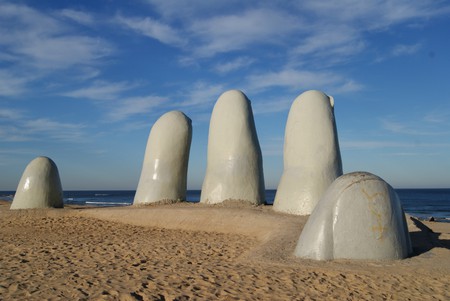 An hour west along the coast from Punta del Este sits Piriápolis – a quaint seaside town with a noticeably Swiss vibe. At the heart of the south park is Fuente de Venus, commissioned by the town’s founder, Francisco Piria, in the early 20th century. It’s based on the temples of Venus in Villa Paravicini, Italy and in Versailles, France. At the center of the monument stands Venus, the Greek goddess of love, pouring sacred water from a jug. Along with two other neoclassical monuments, La Virgen Stella Maris on Cerro San Antonio and Fuente del Toro on Cerro del Toro, it makes up the trilogy of fountains that forms a mythical route around the town. Locals believe that walking clockwise around the fountain brings good fortune to new endeavors, while walking anti-clockwise will banish evils forever. 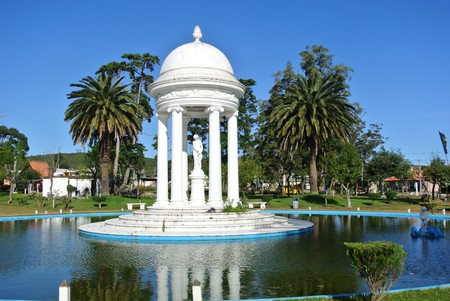 Uruguay’s quirky capital has a patchwork history. Head further west along Ruta 10 for a dose of the country’s culture and set out on a walking (or bus) tour to take in the city’s most powerful statues and sculptures. Start at the beautiful, sprawling Parque Rodó to catch a glimpse of Monumento a la Diligencia. It’s a homage to Uruguay’s early transportation industry, detailing a passenger carriage pulled by four powerful horses. This masterpiece was dreamed up by Uruguayan Realist sculptor José Belloni and inaugurated in 1952. 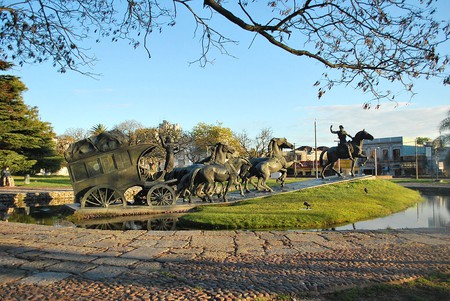 To the east is Parque Batlle, in the northeast of the city. Head there to see the magnificent La Carreta – an epic bronze sculpture depicting oxen and cart accompanied by soliders on horseback. It was created by Belloni in the 1930s to honour 19th century farmers. Just a few blocks south is the towering Obelisco a los Constituyentes, also known as the Obelisk of Montevideo. Standing at a proud 40 metres (130 feet) tall, it’s an unmissable reminder of the significance of the country’s first constitution, signed in 1830. Its three granite sides adorned with bronze statues represent three pillars of Uruguayan society: law, liberty and force. 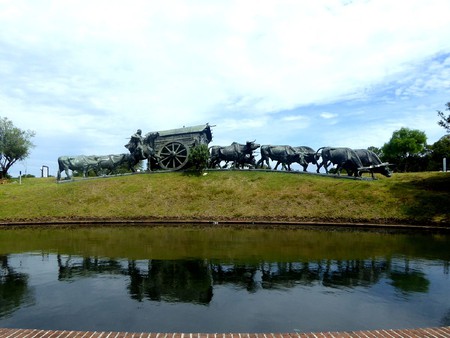 Heading back towards Centro is a statue that celebrates one of Uruguay’s most famous exports: tango. Montevideo’s main thoroughfare, Avenida 18 de Julio, is home to Monumento a Carlos Gardel – a bronze statue of the French-Argentinean singer, actor and tango maestro himself designed by Uruguayan artist Alberto Morales Saravia and installed on the 80th anniversary of Gardel’s death in a tragic plane crash. Often surrounded by tangoing couples, this jolly sculpture outside Bar Facal is an Instagram-worthy stop.

Nestled on Uruguay’s western border is the brewing city of Paysandú, celebrated for its local lager Norteña and its supple leather industry. It’s nearly a five-hour drive from the capital, through endless cattle fields dotted with palm trees. Situated at the focal point of the city’s Plaza Artigas is one of the country’s great tributes to the founder of the nation: Monumento al General José Artigas. The imposing statue depicts a war-ready Artigas astride a noble steed. It was designed by the Italian sculptor Ezio Ceccarelli and commemorates the country’s declaration of independence from Brazil and Argentina in 1828. Today, the plaza plays host to live music, fairs and national holiday celebrations. 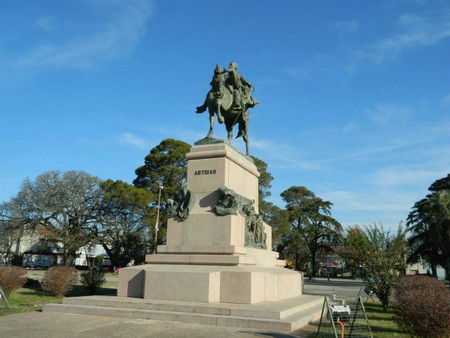