A Guide to Discovering the Best Street Art in Montevideo 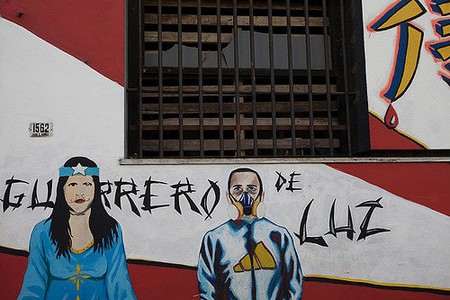 Montevideo is a city bursting with color and creativity. Inspired by the sun and sea, locals were able to paint the city any color they wanted up until 2014, when it was outlawed. Today graffiti and street art are confined to certain areas, and walls have a set transitional period before they can be repainted. The culture in Uruguay among artists is respectful, and seldom do others venture to disrupt somebody else’s creation. Follow our tour to see some of the most important areas where you can find the best street art in Montevideo.

Starting in the port of Cuidad Vieja

From the port, take the street Perez Castellano, in front of the Mercado del Puerto (port market). Walking up, you’ll see a bizarre mural by Venezuelan artist Nicolás Sánchez (aka Alfalfa) that looks like a cross between a bull and a purple dragon.

Further along there is a masterful piece of hyperrealism called “The Sorority” by Fitz. This piece represents the strength, unity, and insoluble sisterhood between women in the face of institutionalized oppression—the artist hopes to highlight that no woman should suffer to feel free. 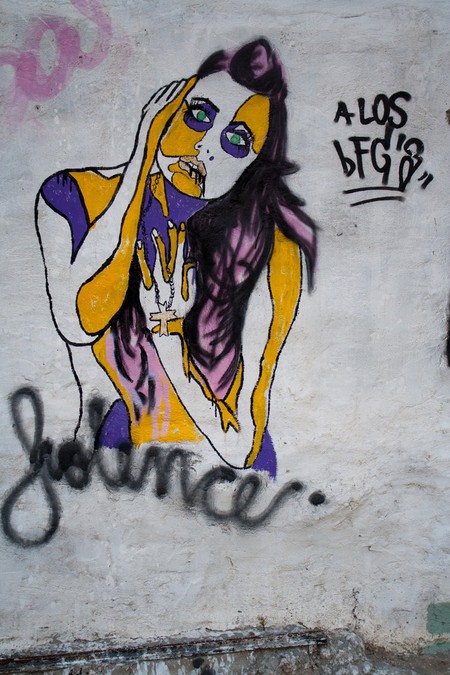 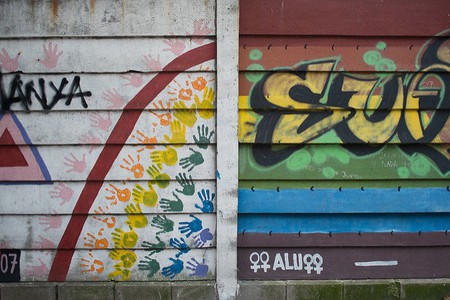 Next up you can take a left at 25 de Mayo, or continue up to Reconquista and explore two different trails. The first has a couple more pieces by Nicolás Sánchez along the ground and walls as you make your way to Cerro Largo. The second takes you close to the coastal promenade to see some colorful paintings of butterflies and tandem bicycles. 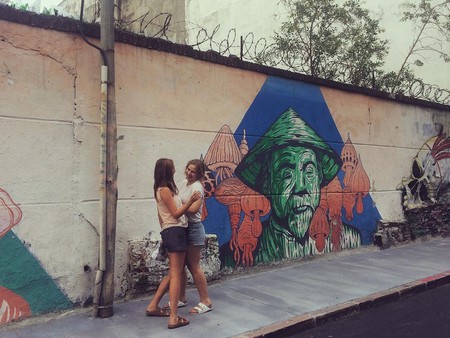 On the way to Cerro Largo there’s an intriguing piece of modernism by artists Alfalfa, Noel, and Zësar called “Colectivo Triplemúltiple” between some other thought-provoking works meant to inspire the sentiment of change and interconnectedness in the public.

Next comes a black and white mural called “Laberinto,” or labyrinth, which is a maze of trees that stripe the wall and is by artists David de la Mano and Paul Herrero. A few more blocks and there’s an impressive series from the 2015 Wang Street Art Festival. 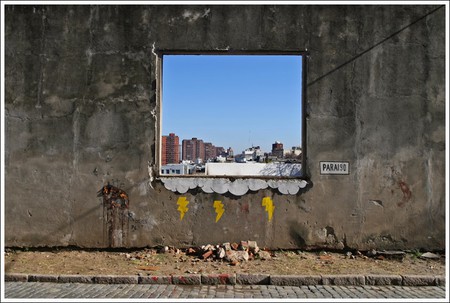 A couple of blocks to the left along Julio Herrera y Obes, there are three more pieces including ‘colorful fish of duality’ and a typographic. Here the tour would make its way back to the main street of 18 de Julio to visit the massive painting of four renowned film directors above Cinemateca 18.

There are several pieces scattering the walls of these streets and even along the coastal promenade that are outstanding works of art. Work your way to a building decorated by locks of hair that wisp into roses. The piece is called “Future Memory” by the outstanding Uruguayan Artist Romina Romanelli, whose work can be found all over the continent. 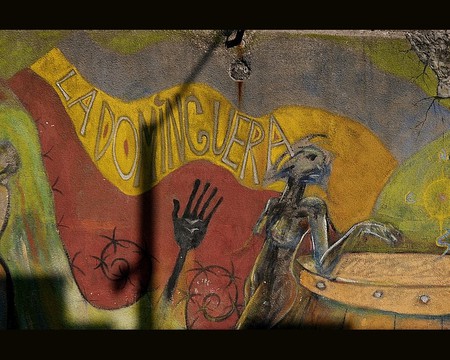 Next along is the neighborhood of Barrio Sur, where the residents have painted innumerable murals depicting everything that unites them with their culture. This being Uruguay, many of these feature candombe, a national type of music, or their favorite local football team. 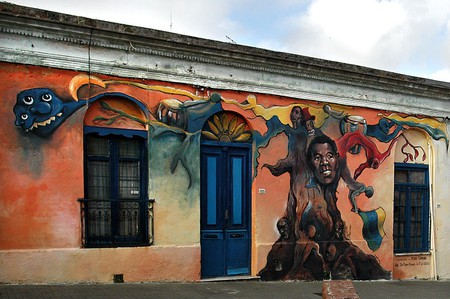 The Design District of Palermo

Both trails reconnect in Palermo, where Constituyente Street becomes Bulevar España and intersects with Maldonado and Canelones. Here there is possibly the greatest concentration of street art in the city, with pieces that range from a raw heart in bare hands to selfie-taking elephants on penny-farthings to Manga-styled portraits. It’s hard to turn your head here and not see something incredible. 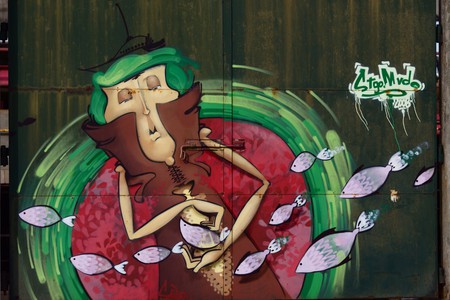 Nearby on Charrúa Street there’s a fun design of toddler twins called “the Angel and the Devil” in spray paint and plastered paper.

Just before Constituyente becomes Bulevar España, you can find a number of pieces on the same wall, one of which depicts an animated view of Montevideo from the sea, which caricatures its landmark features in purples, greens, and blues. There is also a series of pop-culture designs a few meters along featuring The Simpsons and other culturally relevant references. 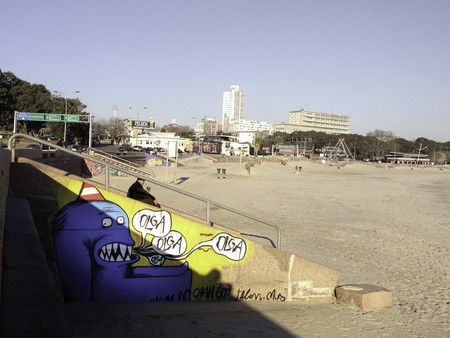 Another impressive building in this area is Zorrilla High School, which is painted almost top to bottom in all manner of styles and methods. It’s a fascinating place and enough to make you feel jealous of teenagers for once. Around the corner from this building there is another wall lined with colorful psychedelic mushrooms ballooning to its roof. 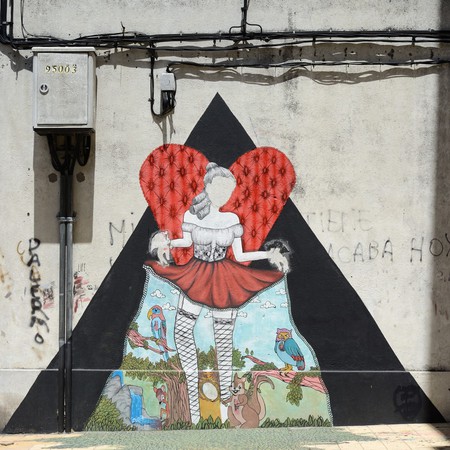 The tour would end back in the City Center near the University buildings, after having walked up Frugoni and enjoyed multiple examples of urban art along the way. The nearby work by Fitz, Zësar and Matías Fiori is a ponderous piece called ‘The Infinity Inside Us’ and calls on you to imagine a world with ‘Closed Eyes and Open Dreams’. 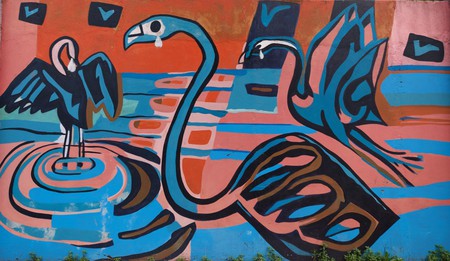 Mural on a wall of Montevideo’s zoo | © Jimmy Baikovicius / Flickr

The most notable building in the area, the National Institute of Youth, has a multicolored façade painted by Noel and Maldito Bastardo, making it one of the most approachable and energizing buildings. 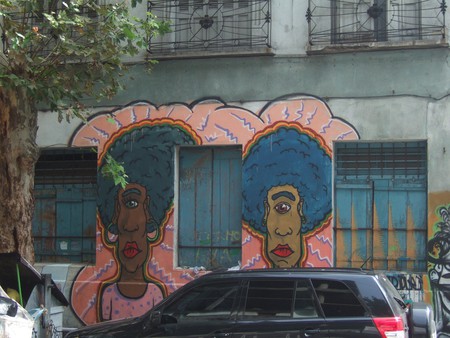 Bonus: Aguada, for those who still have energy left

The neighborhood of Aguada deserves a notable mention, too, for its grand works of street art assembled by a group known as Mural Colectivo, which were mostly completed during the 2013 Muta Montevideo festival. They created designs that span across different walls and corners depicting significant works of art, like the Creation of Adam, with a modern twist.

Naturally, this is not all the Street Art Montevideo has to offer and there’s always intriguing pieces to discover in every neighborhood. The abundance of Street Art in the capital is amazing as these artists have contributed to making Montevideo a vibrant and dynamic city to explore.

To find out more about Montevideo’s street art scene and culture, you can visit streetart.uy (Spanish) for a comprehensive guide to the artists and their works.