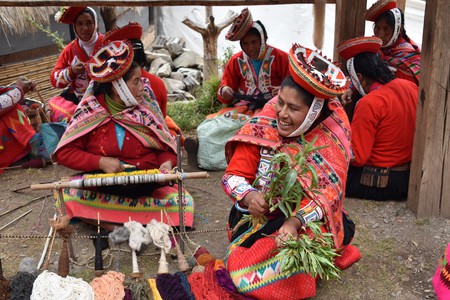 In the Sacred Valley near Cusco, the Awamki organization is helping local indigenous communities partake in Peru’s tourism-generated income while also preserving their ancient traditions.

A local woman from the Huilloc community places bits of dried worm in my hand and instructs me to crush it. She then pours warm water over the black pieces in my palm, which I swirl until the liquid turns a deep, purplish red. Another woman sprinkles some grains of salt into the mixture and as I push it around with my finger, the color changes to a bright, vibrant red. Even after I wash it off, the stain remains on my palm and finger for a few hours. This is how the women dye their alpaca yarn. 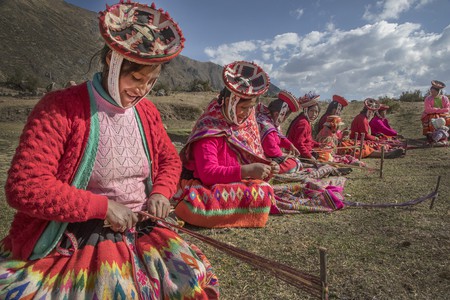 On this day in Huilloc, Peru, a group of five women show me how to spin alpaca wool. They display the plants, minerals and cochinilla worm they use to produce a variety of colors. They also demonstrate how to boil and dye the yarn, and then they weave the threads on a loom. The women make blankets, purses, ponchos, headbands, scarfs, table runners, key chains and many other things, all woven with intricate designs – all of which they offer for sale at the end of our time together. 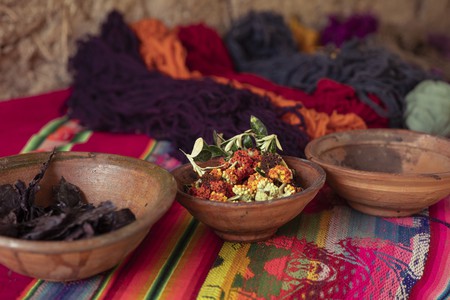 The indigenous people in Peru still use ancient methods to dye their clothes, by crushing flowers, rocks and worms that eat the fruit of cacti | | Courtesy of Awamaki Project

These women are part of a collective that works with the Awamaki Project. Awa means ‘weaving’ and maki means ‘hands’ in Quechua. This non-profit organization tries to help indigenous cultures bring in income from textile and ecotourism programs in a way that preserves their traditions. 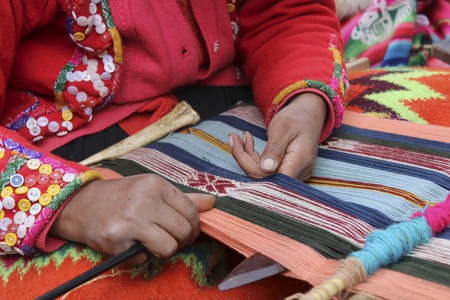 This particular cooperative’s community is nestled in the Sacred Valley of Peru – so called because of the fertile land surrounding a river that snakes down a narrow stretch between mountains. Past Cusco, past Inca ruins, past the ancient and quaint town of Ollantaytambo, closer and closer to Machu Picchu, we drive on dusty mountain roads to a place with no internet.

The nearby historic site of Machu Picchu is overflowing with tourists and foreign-run tourism agencies. Yet too often locals are disadvantaged and unable to connect with the tourism dollars that foreigners spend to see their land and their traditions. And when locals do find a way to partake, the modern and foreign demands often erode locals’ ancient traditions, and they find themselves making pizza instead of quinoa and wearing parkas instead of ponchos. With exposure to tourism comes the threat of change and the risk of losing those authentic differences that people come from afar to experience. This is why some organizations like Awamaki are working to solve the issue and redirect tourism profits to the people who live in the tourist areas while preserving their cultures. 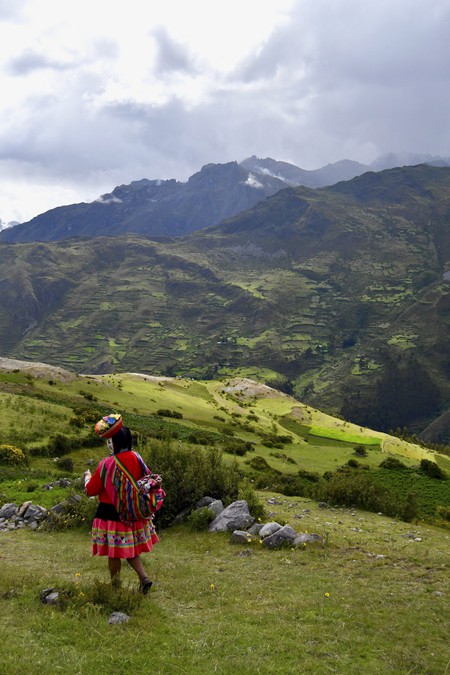 At first Kennedy Leavens, founder of Awamaki, thought to preserve culture by selling the beautiful and unique handcrafts the women make in town and giving the profits to the women. As the women mainly depend on income from their husbands, who often work as cooks or guides on tourist treks to Machu Picchu, the craftsmanship is the women’s only way to contribute to supporting their families and sending their children to school. However, Leavens came up with a new idea when she realized how often she encountered questions from foreigners about the authenticity of the products. The textiles were so well woven that people wondered if they were really done by hand. So Leavens decided to show them.

Tourists can pay to be taken into the communities nestled in the Sacred Valley and given a demonstration of the weaving. On the trip, visitors can also see less traversed ruins, speak to locals and participate in a traditional pachamanca lunch. Meaning ‘earth oven’, the pachamanca is a meal cooked in a pit in the ground, covered with hot stones and dirt so that the chicken, potatoes and beans can steam in an enclosed cave for hours, creating succulent, slow-cooked food. Visitors also borrow the same bright, patterned clothing as the indigenous communities and are asked to wear the clothes at all times. This is done both out of respect for the local people’s customs and also to show the children that the world is interested in their traditions, encouraging the little ones to be proud and keep their culture. Awamaki doesn’t take tourists on Sundays or during festivals in order to give the community time to themselves and respect their practices. 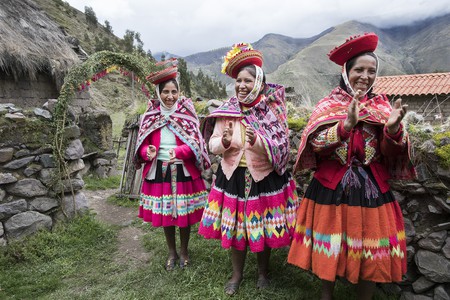 Awamaki members loan travelers hats, shawls, and skirts that they’re asked to wear for the duration of the visit | | Courtesy of Awamaki Project

Each cooperative from different communities go through a learning program before they graduate to function independently without the help of Awamaki and earn all of their own profits. Founded in 2009, the first cooperative took nine years to graduate, and the most recent one took six years. The goal for the next cooperative graduation is three years. 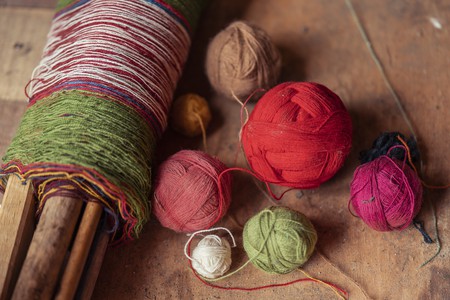 Though Awamaki helps sell the women’s textile products at first, communities that graduate from the program operate independently and keep 100 percent of the profits | | Courtesy of Awamaki Project

“It was a learning process for both of us,” explains Melissa Tola, the tourism coordinator for Awamaki. “[At first], we didn’t have a plan on how to start working with the communities. Now we have a plan.”

During the first learning years, Awamaki has workshops with the cooperations, teaching them finances, assigning monetary value to their crafts, teaching them to advocate for themselves and stand up for their prices so they don’t get ripped off or taken advantage of by agencies. Once they can start to attract tourists on their own and independently work with agencies to transport the visitors, they graduate and only consult Awamaki for advice if needed. The last community graduated, Tola says, because, “they had three tours on their own while we were there, so I said, ‘You don’t need us, you can do this yourself!’” 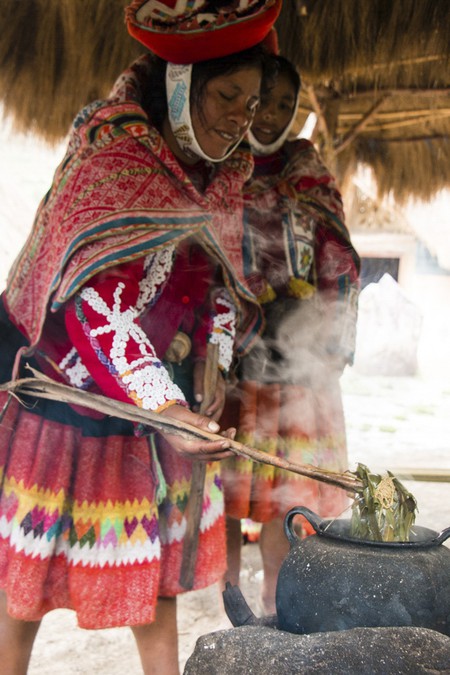 Awamaki also encourages other tourism opportunities, such as in one community that started a glamping experience on their own. Until the cooperatives can function independently, Awamaki makes the arrangements with agencies such as Exodus Travels, which brought me from the airport and showed me ruins along the way. As Tola explains, “we try to work with agencies who are aligned with what we want to do, not just for money.”

The objective for Awamaki is to give, not take. In order to work with new cooperatives, “we don’t go into their community,” says Tola. “It’s [they] who approach us.” So far, their program has spread by word of mouth and Awamaki hopes it continues in this way with each success. 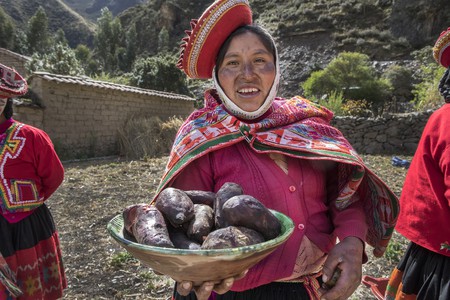 Visitors participate in a local lunch experience, where native potatoes and other foods are steamed in a pit in the ground called the ‘pachamanca’ | | Courtesy of Awamaki Project

As of 2019, Awamaki has worked with 190 women and eight men from seven communities. In the Huilloc community I visit, there is much laughter. Luckily, my guide from Exodus speaks Quechua and jokes with the locals in their own language, which builds their comfort and trust. They tell him they feel very happy that Awamaki helps them so much. They explain how the money enables them to support their kids and send them to school. 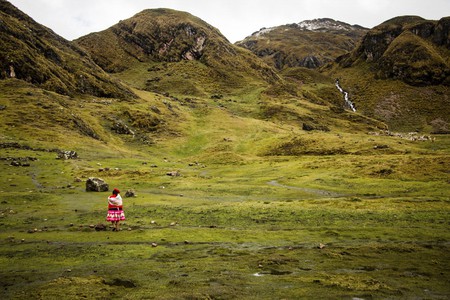 Children learn to continue their traditions, speak Quechua in addition to Spanish, and play amid nature | | Courtesy of Awamaki Project

When I ask about foreign influences, they say they’re not worried because they teach their children to keep the same traditions. If they go to schools in the city of Cusco, they always come back. The children also help their parents improve their Spanish so they can keep communicating with tourist agencies that can’t speak Quechua. And even though they now have television and cell phones, they say the effects of technology have minimal impact on their firm traditions. They still make it a priority to connect to the pachamama, or mother earth, which is sacred to them. Despite the technology and temptation of screens, the children are always found outside. It’s a joyous community and we watch as the young ones run around, playing in the mountains and connecting with the nature so sacred to their ancestors.