What They're Listening to in Peru 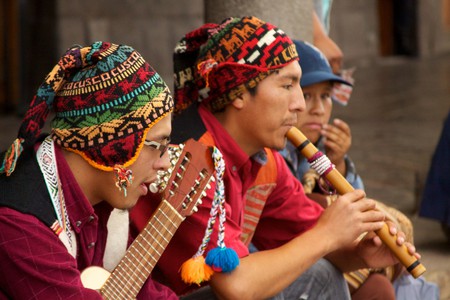 Just like the people who make up the country, Peru’s music and what Peruvians like to listen to is very diverse. There’s the oddity of American ’80s rock, which you’ll hear on buses and acoustic versions in coffee shops, there’s Peru’s own chicha music and everything else in between. Check out what the locals are listening to and what to expect to hear when you come to Peru.

Throughout Lima and the rest of the country, you’ll hear a large dose of everything ’80s rock from artists like Peter Frampton, AC/DC, Bon Jovi and especially Guns N’ Roses. It is no wonder why Maroon 5, while not classic ’80s rock, is playing a sold out show at Lima’s national soccer team’s stadium. Be prepared to be at a bar and hear some tunes that may take you back to the past.

Cumbia might be Peru’s favorite music, beloved everywhere throughout the country. The genre has inspired sub-genres such as chicha and electronic cumbia. It isn’t a surprise that the dance-oriented music, which originated on the Caribbean coasts of Colombia, is popular in Peru considering that it is hugely popular throughout the entire continent.

Chicha, a sub-genre of cumbia, is a mix between classic cumbia and psychedelic/surf rock. Chicha takes the feel of cumbia, the timing and “tropical” sound, adds elements of huayno (from the Peruvian Andes) and criollo (classic Peruvian folk music) with electronic guitars and an early surf rock sound. The sound is very unique and completely Peruvian.

If you want to dance, the music of choice will most likely be salsa. Just as in other Latin American countries, salsa is very popular and is practiced by everyone. Peruvians listen to all kinds of salsa from all over the world.

Out of Peru’s chicha music (psychedelic cumbia) and electric music was born Peru’s new sensation, dubbed electronic cumbia. Popularized in the dance scenes of Lima, the music has been recognized internationally by groups such as Dengue Dengue Dengue, Animal Chuki and Alqsbs.

While it is a very broad genre that can incorporate a lot of different sounds, it is probably best exemplified by Novalima. Novalima blends Afro-Peruvian music with Electronica and Latin American rhythms. The Latin Grammy nominated group formed in 2001 and have been touring since their inception.

Popular in other Latin American countries, Peruvians have also found an affection for the contagious beat of reggaeton. This music is very popular in dance clubs and discos, but can be heard all over the country no matter the time of day or place.

Like everywhere else in the world, Despacito is extremely popular in Peru. From little girls and boys, to an old man selling fruit, you’ll see everyone enjoying this tune. If you’re out at night, you’re sure to hear this song played at least once – most likely twice or three times. The song recently became the most viewed in YouTube history.