Food is integral to the identity of Peru. So it is particularly pleasing for Peruvians to see their cooking gaining prominence in the global gastronomical scene. Here are 12 incredible dishes from Peru that we would heartily recommend.

Ceviche is a fresh and vivid dish, recently also served in restaurants across USA and Europe. It is prepared by marinating cut-up raw fish in Peruvian lime juice and then mixed with aji peppers, onions and spices. Aji chilli pepper is omnipresent in Peruvian cooking, particularly aji amarillo. The flavoursome leftover marinade from Ceviche is called leche de tigre, and as the name suggests, it is perceived to be an invigorating liquid to drink.

Pollo a la Brasa is so tasty and contagious that there is now a day in the Peruvian calendar dedicated to celebrating it; conveniently, it is called ‘Pollo a la Brasa Day’. The pollo a la brasa phenomenon has swept across major cities in the USA. It is also known as blackened chicken, since it is roasted on a rotisserie using charcoal. The chicken is cooked with soy sauce and is served with chunky French fries.

Causa is a layered potato cake with fillings, lending itself to many variations. Peru possesses a rich variety of different potatoes, including yellow potatoes (papa amarilla) and is routinely used to make causa. The template of this dish involves mashing the potatoes and moulding it into a cake while seasoning with lemon or lime juice, oil, salt and pepper. Traditionally, causa is served cold and the fillings tend to be aji yellow peppers, avocado, eggs with tuna, shellfish or chicken salad.

Quinoa’s elevation in status amongst foodies across Europe and America has been a noticeable trend in the past decade. It is an edible seed labelled as the ‘complete protein’ and is popular for its health properties: containing nine essential amino acids. However, quinoa soup recipe is very much a traditional staple in Peru. Although the ingredients added to it are adaptable, typically, ingredients include squash, beans and potatoes. If you’re a carnivore, then chicken and quinoa soup is a great option. 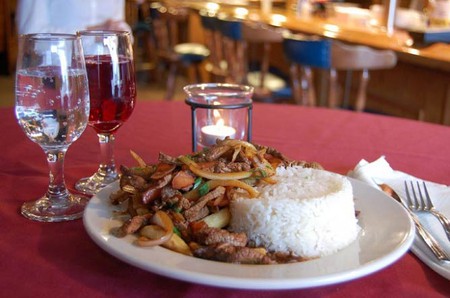 This dish is a prime illustration of how Peruvian cooking has been shaped by cultural diversity. Lomo Saltado is an amalgamation of Chinese and Peruvian flavours: tenderloin beef or sirloin steak stir-fry. Chinese cuisine in Peru is known aschifa, a form of cooking embedded and infused within this South American country because of Chinese immigration during the 19th century. So the meat is often seasoned with cumin and then stir-fried with tomatoes, aji peppers, onions, cilantro and soy sauce. It is served with French fries and steamed rice.

The city of Trujillo, located in the Northwestern part of Peru, has a memorable soup called Shambar. It is a unique soup that fuses Andean, Criollo and Spanish styles of cooking. Shambar is a thick soup consisting of wheat grains, cilantro, chickpeas, crushed garlic, aij panca, beans and at least three different types of meat: usually pork, beef and ham. Furthermore, it is also called Shambar de los Lunes, as it is normally served in Trujillo on Mondays in order to re-vitalize people for the week ahead.

This is a further example of Asian immigration influencing Peruvian cuisine. Tiradito takes its inspiration from a Japanese delicacy: Sashimi. There are strong similarities between tiradito and ceviche, yet in this case, the raw fish is cut into very thin slices akin to sashimi. Also there is no marinating process when creating this dish, for the fish is covered in sauce right before it is served so that it can be consumed as raw as possible. 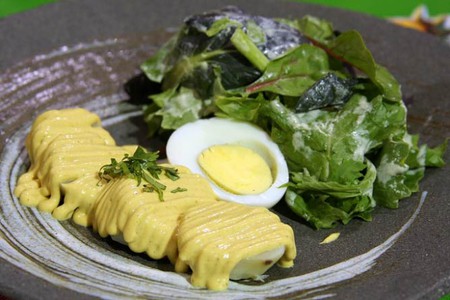 Papa a la Huancaina I | © Larry/Flickr

The distinctive Peruvian aji peppers are central to this recipe: providing colour and a spicy kick. Aji de Gallina is a creamy stew consisting of chicken breast and rice. The amazing yellow sauce is made using evaporated milk, aji peppers, breadcrumbs, onion, garlic, cheese and either crushed walnuts or pecans. It usually comes served with lettuce, slices of a boiled egg and black olives. Alternatively, there is a popular vegetarian option featuring boiled yellow potatoes, known as papa a la huancaína.

This is a special Andean cooking traditional still utilized today, mainly for banquets in Peru. The term comes from the Quechua language, spoken mainly in the Andes region, and refers to the idea of using the earth as an oven. Stones are heated up and then placed at a bottom of a pit in the ground. Next, the meats are marinated, wrapped in banana leaves and cooked on top of the very hot stones. This Andean pit roast also usually includes potatoes, fava beans and corn on the cob.

The energetic street food scene in Peru has really bolstered the country’s reputation internationally. Anticuchos are a centrepiece of this craze, a definite highlight to be found in the midst of the busy streets in Peru. The dish is essentially marinated meat on a stick cooked on a grill. However, the most interesting selection sold by street vendors is anticuchos de corazon: tender beef’s heart. These delicacies are cooked with red wine vinegar, cumin seeds, garlic cloves and peppers. 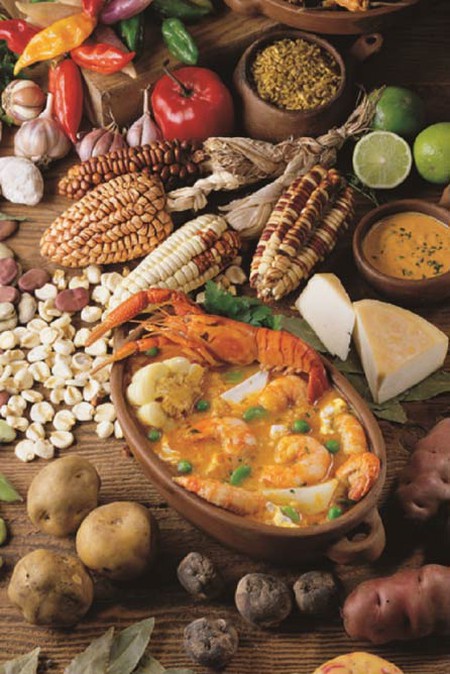 Peruvians really do excel at creating a substantial bowl of soup; after all there are thousands of soup recipes to choose from. A must-try dish is chupe de camarones, a traditional but delicious meal otherwise known as shrimp chowder. The soup bursts with flavours and contains the freshest of ingredients either shrimp or crab combined with potatoes, chilli peppers and other spices.

The prospect of eating a guinea pig tends to elicit a squeamish response from those living outside of Peru. However, cuy is commonplace here (particularly in rural communities) as a good source of protein. Many have been surprised by how rich and tender cuy meat actually is when served with hot pepper sauce, and the dish is often compared to rabbit.