The Untold Story of The German-Austrian Settlement in Peru 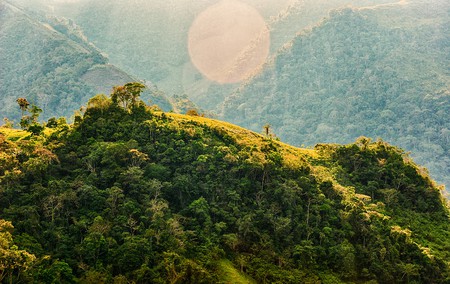 Pozuzo is a town located in Peru‘s central jungle zone, known to be the first German and Austrian settlement in the country. Today its residents, many of whom descend from the first settlers, still preserve their European roots with traditions from their forefathers. This is their fascinating story.

In 1859, a group of Austrian and German settlers sailed the Atlantic and crossed the Andes hoping to start a new life in a land they had been promised.

During the mid-1800s, Peru’s bird manure industry had seen the country’s economy skyrocket, creating a need to extend the railroad system across South America. The Peruvian government pushed for European immigration as a way to populate areas like the central jungle, where the railroad would eventually cross. They promised immigrants they would pay for their trip to Peru, in addition to cargo mules for their journey to the jungle, and the granting of land titles and a small stipend to start off.

Although a previous attempt to colonize Pozuzo failed, Baron Damian Schutz von Holzhausen, a German noble living in Peru, saw a new opportunity to found the first German colony in the country.

According to author Fred Allert’s Pozuzo, the baron gathered 200 Prussians and 100 Tyroleans who were looking to escape a poor economic situation and strict marriage laws in their homeland. In fact, 23 weddings (mostly Tyrolean) took place during the 110-day trip across the Atlantic. The trip had started off well with only a few deaths on board.

But once they arrived, the settlers were kept in quarantine at an island off Lima’s shore before they could touch land. It was just the start of a rough journey. Once they were let go, the settlers headed north to Lima and began their trek across the Andean mountain range with the help of 210 mules. During their journey, they had to endure extreme cold temperatures and high altitude sickness. Some perished due to disease, and many left the caravan and returned to Lima. Those who stayed were suddenly alone and without the financial help that had been offered by the Peruvian government, looking to reach and settle in a territory that, at the time, was unknown even to most Peruvians.

Two years later, only 156 settlers reached the edge of jungle. Because the traced road ended at that point, they had no choice but to build their houses and church there. Tragedy struck soon after, when a night avalanche of mud and rocks buried the small colony, killing six and leaving the rest feeling uneasy about the location. After moving once again, on July 25, 1859, some 170 settlers finally reached the Pozuzo Valley. Abandoned and in extreme isolation, the settlers established their own order first by assigning their properties and building an entire village without the promised help from the Peruvian government. They never left.

Pozuzo is home to around 8,000 people, many of them descendants of the first German and Austrian settlers. The town is know for its welcoming, environmentally friendly and self-sustainable community.

Locals tend to work in the cattle farming, agriculture and experiential and ecological tourism industries. Pozuzo still preserves its German architecture in buildings like the Schafferer Museum, where visitors can learn about the town’s history and the lifestyle of the first settlers through old pictures, clothes, belongings and artefacts used by the first settlers. Other buildings that have kept their European structure are the San Jose Church built in 1875 and which still holds parts of Sunday mass in German language, the William I bridge built in 1877 and the old cemetery where the first colonists are buried. 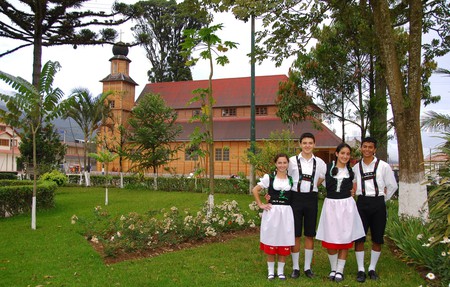 In Pozuzo you’ll still find traditional German restaurants that offer a variety of dishes, from frittatensuppe (sliced pancake soup) and schnitzel to käsekuchen (cheesecake) and strudel. Like in lots of German towns, Pozuzo has its own craft breweries that can easily compete in taste with Peruvian local beers.

Sports like mountain cycling, biking and canoeing are some of the activities that can be done in the area, as well as birdwatching the rare Andean gallito de las rocas, Peru’s national bird.

Every July 25, Pozuzans celebrate Colonists’ Day, a festivity that commemorates the arrival of the first settlers. 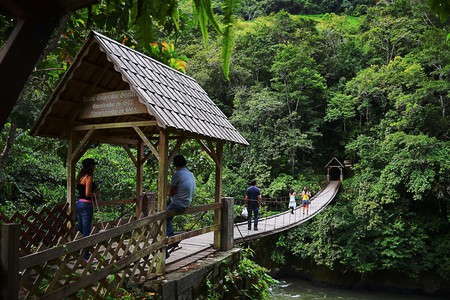 How to get to Pozuzo

Pozuzo is located at the edge of the Peruvian jungle, in the centre region of Pasco. Home to the Yanesha indigenous people, Pozuzo is the closest jungle area to Lima. Reaching Pozuzo means driving 520 km (323 miles) inland and through one of the highest roads in the world, the Peruvian central road, which has a peak of 4,818 meters (15,807 feet) above sea level. Pozuzo is at an altitude of 800 meters (2,625 feet) above sea level. From Lima you must drive or take a 10-hour bus ride to Oxapampa, another town founded by the descendants of the first German and Austrian settlers. From there, you must take a bus through an unpaved road for about 77 km (48 miles) until you arrive at Pozuzo.

Every year, hundreds of Peruvians and Germans living in Peru, escape Lima and travel to Pozuzo and nearby communities for their unique festivities.

The calendar of activities for German colony would not be complete without its highly anticipated Oktoberfest – except here it’s called Pozuzofest. Advertised as the ‘festival of beer, culture and gastronomy’, Pozuzofest is the perfect excuse to visit this hidden gem in mid-September. Throughout this time, Pozuzans and German descendants from all over the country embrace their heritage with great enthusiasm. Visitors are welcomed by Puzozan women in dirndls and men wearing lederhosens and hats, who dance polkas and other popular folk dances throughout the weekend. Belt races and wood chopping contests happen as the audience watches while enjoying local brews and live music, all day and all night.

Another important and new festival takes place near Pozuzo – set in Oxapampa, Selvamonos music festival has become Peru’s own Woodstock. Selvamonos gathers the hottest Peruvian artists of the moment in a week-long music fest, and allows festivalgoers to camp out and participate in cultural activities that promote environmental awareness while enjoying the beautiful high jungle scenery.

Other festivities you can catch in Pozuzo are the Typischenfest (a cultural festival at the end of May), the Strudelfest (June), the anniversary of Prussia (September 24), the Oxapampa Country Festival (June) and the Semana Turistica de la Selva Central, a week-long event that promotes tourism in the region (end of June).