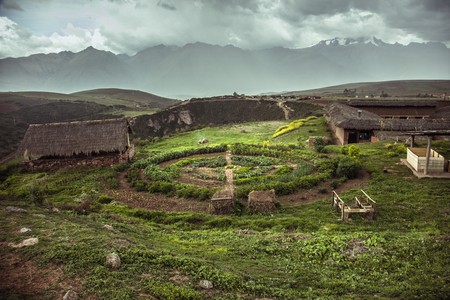 The food discoveries made by the Andean people of the Inca civilization were almost completely lost due to the Spanish conquest, but many locals are now bringing back the knowledge that quietly persisted in isolated communities of Peru. Mil and Nuna Raymi are two restaurants in the country that focus on preserving Andean food traditions in an experimental and avant-garde way.

Up a windy, dusty path in the Sacred Valley of the Andes Mountains is the road to Mil Centro. Mil is the second restaurant created by Virgilio Martínez, owner of the famous Michelin-star Central in Lima. It’s almost a wonder why his succeeding restaurant would be located so out of the way, far from the more populated town of Cusco and in a seemingly uninhabited landscape. But once the ancient archeological site of Moray comes into sight a few meters from the entrance, everything clicks. 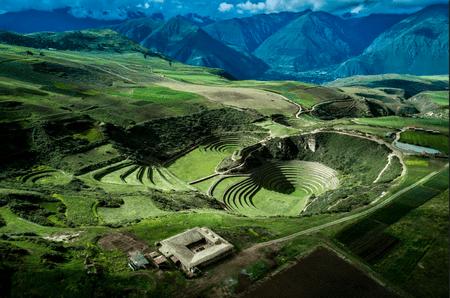 Moray, in the Sacred Valley of Peru, was a site for food experimentation | | Courtesy of Mil

Moray is an ancient food laboratory where the Inca civilization used to experiment with crops. The site contains a series of concentric circles sunk into the earth in descending height, a bit like an amphitheater. The lowest and most insulated circle contains soil at the warmest temperature, and each higher terrace gets colder and colder. The Andean people used these pits to acclimatize seeds to the cooler temperatures, becoming more durable as they were moved to each level, so that the crops could therefore withstand the harsh conditions of the high mountainous areas and give more prosperous yields. They also experimented with different strains of potatoes, corn and other foods here to produce a multitude of varieties rarely seen today, such as over 2,500 variations of potatoes. The Andeans could store these potatoes for more than 10 years (and nearly as many years for corn as well) in storage units they built on top of mountains, like archaic fridges. 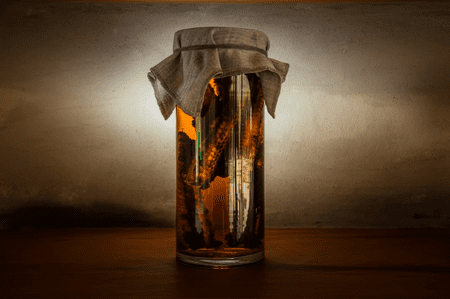 However, such knowledge was lost when the Spanish killed and destroyed much of the Inca civilization. A few indigenous communities survived and retreated deep in the forests and mountains surrounding the Sacred Valley in Peru, hiding themselves for protection. And they isolated their traditions with them. For a while, modern Peruvians didn’t do much to celebrate this ancestral food at home or proudly display the cuisine to the world. But now they are reinvigorating it. 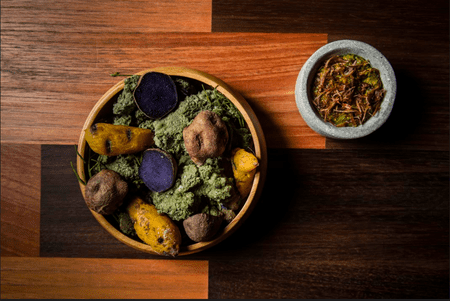 Mil uses old and new techniques on ancestral foods, bringing the dishes to a new gastronomic level | | Courtesy of Mil

“We don’t discover the ingredients,” says Ana Julia Pereda, who works in reservations at Mil. “They are already there. We find new uses for them.” She leads guests through a corridor where local herbs and fruit hang upside down “for preservation,” she says, as their ancestors did. In an open-air courtyard, there are processes of dehydration, distillation and fermentation, with foods floating in discolored liquid in glass jars. This leads to a room where visitors are encouraged to touch the quinoa, tubirs, wood and edible clay. The following meal contains high-altitude lagoon algae called cushuro, coca leaves, tarwi lupin beans that the Andeans domesticated to make edible, kjolle flowers and many obscure herbs. The menu is a wonder for the taste buds, with unfamiliar flavors that are delicious and mind-opening. Clearly Mil is doing their own innovations with food – like a modern version of the experimentation of Moray. 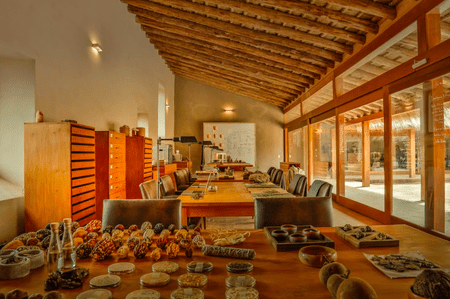 Mil isn’t the only restaurant to play with ancestral foods in a new way. Rocio Zuñiga is the owner of Nuna Raymi in Cusco and agrees, “We need to do more research about new techniques of how to eat [Peruvian food].” When creating her restaurant, she looked for local chefs who were interested in cooking with native Andean food using memories of family meals, but with modern techniques. 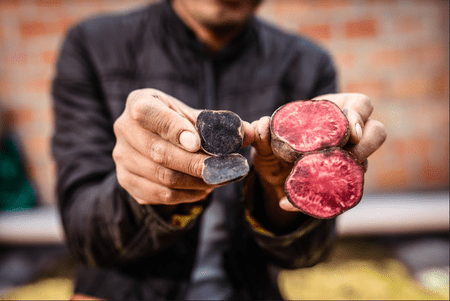 At the entrance to Nuna Raymi is a small market with purple corn, a variety of potatoes and rare cocoa beans, which the owner will happily explain the origins of to visitors. Zuñiga wants to bring food experimentation back like the Andeans used to do, so that rather than reducing variations of corn to one homogenous strand (as was done in North America) that lacks nutrition and is easy to wipe out, all kinds are embraced. She wants to both increase demand for food biodiversity and bring awareness to the farmers who produce such crops, consequently giving them better and more just wages. 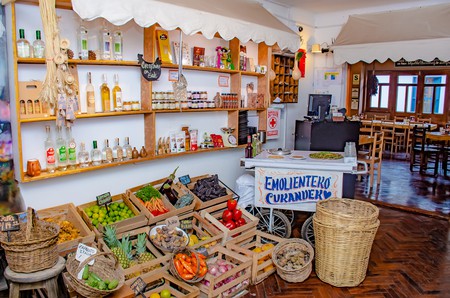 The name of her restaurant translates to something like ‘a celebration of the spirit energy’ in Quechua. Zuñiga makes an effort to embrace Pachamama (Mother Earth) as her ancestors did, since respecting the Earth and appreciating where food comes from is part of the traditions passed down. Mixing ancient reverence for Pachamama with modern global warming concerns, Nuna Rami was one of the first in the area to get rid of plastic straws, use recycled materials in the building’s infrastructure, create a design with natural light to reduce electricity usage, work directly with local farmers, have a seasonal menu, increase meatless options and hang up numerous plants to increase oxygen flow inside. 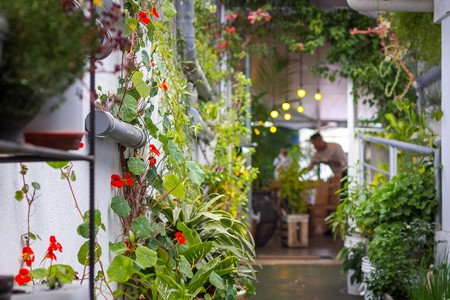 Different plants can be used to balance ‘hot’ and ‘cold’ foods in a diet, equalizing acid with alkaline and helping digestive issues | | Courtesy of Nuna Raymi

But these plants provide more than just fresh air. The herbs grow in pots along a sunny corridor leading to the dining room. It’s not just pretty decoration – these greens will go into the meals here, serving as flavoring, nutritional value and digestive tools. The use of food to aid digestive issues is something else the Inca civilization cultivated and passed down through generations before a time when scientific studies could validate their practices. Today, many people from rural areas will talk about food as either ‘hot’ or ‘cold’ but in a way that has nothing to do with temperature or taste. 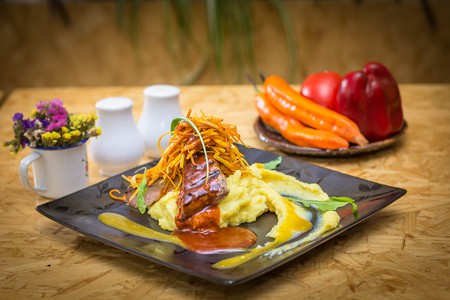 The dishes at Nuna Raymi are thoughtfully crafted, with labor justice and health in mind, but the amazing taste speaks for itself | | Courtesy of Nuna Raymi

Zuñiga explains that hot and cold foods are those that balance acid and alkaline in our stomachs. If you have too much hot, you need more cold, and vice versa. In this way, the Andean peoples regulated their digestive systems and took care of conditions we now call acid reflux and heartburn. She’s aware of these properties when preparing her dishes, balancing them with the home-grown herbs, though all thoughts of biology fall to the background with one bite of her creamy ají de gallina or zesty quinoa dishes. 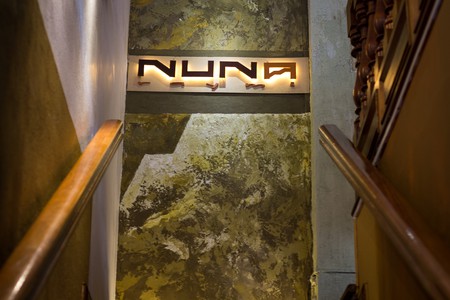 At Nuna Raymi, which translates from Quechua to “a celebration of the spirit energy,” the owner believes that new generations are looking to connect to their ancestral heritages | | Courtesy of Nuna Raymi

The owner of Nuna Raymi isn’t the only one to talk about this. Back at Mil, a guide from the community named Bruce Apumayta explains that many locals like himself have this knowledge of hot and cold foods passed down through many generations, but can’t explain why or the science behind it – they just learned it from their parents, who learned it from theirs. He works for Exodus Travels and explains how the Inca civilization lived in better harmony with nature, eating meat only sparingly, crafting crops along the curves of the mountains rather than leveling the land and employing natural irrigation systems that can still be seen today, looking like small canals running next to all the streets in towns like Ollantaytambo. The knowledge still persists today thanks to tradition. In the dining room of Mil, Apumayta chats with one of the servers from the surrounding community in both Spanish and Quechua, her local language. Apumayta asks her about hot and cold foods and wonders how they know. “I don’t know,” she agrees with a laugh. “It’s just what my mom told me.” 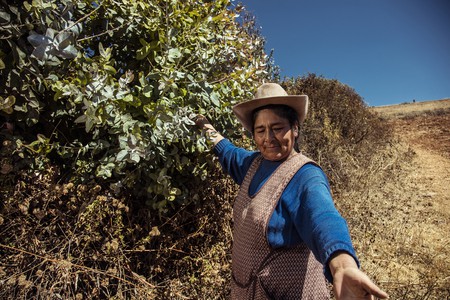 This woman’s name is Nery Amau Juarez and she is from the rural community called Mullak’as–Misminay, which surrounds Mil, and with which the restaurant has made a priority to engage. Mil buys most of their produce from the 724 inhabitants of the Mullak’as–Misminay or the Kacllaraccay communities, but strives to create a relationship that goes beyond a simple trade. Mil provides the soil and seeds to the local farmers, who produce the crops. The workers then give 50 percent of the harvest to the restaurant and keep the remaining half for their community to eat. “With this project, now I can help my family,” says Amau Juarez, referring to both the trade and her employment at the restaurant. 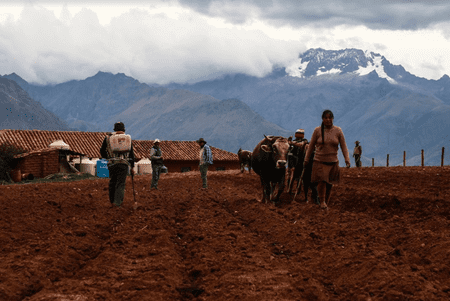 Ana Julia Pereda explains that the restaurant could not function without the trust and exchange with the locals. They value a firm and equal relationship with constant and impeccably transparent communication. Discussions are always done in a circle (called minka), so that everyone can share their opinions as equals. This relationship creates anyi (“reciprocity” in Quechua) between the business and the community and is a crucial and almost reverent cultural practice. “[Mil] works with anyi,” says Amau Juarez, nodding serenely. “People are forgetting our customs, but this restaurant is helping reverse that.” 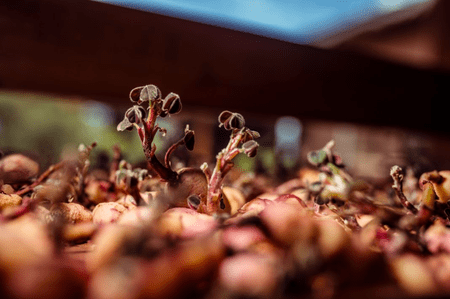 Zuñiga at Nuna Raymi agrees that community and tradition are necessary today. She says her restaurant is “not just for money, but to share something – history, family, memories.” She realized she couldn’t start a business without fostering the community. The food itself comes from tradition. “It’s difficult, because traditional Andean food is only cooked at home; and our new generations are losing that,” Zuñiga says. “Our generation is desperate to learn something about the heritage of their family. Now it’s coming back.” She puts a plate of food in front of a small boy with eyes like hers, jabbering to himself in Spanish, and smiles down at him. Thinking about traditions, she says, “If my sons don’t follow my path, we won’t have them anymore.”