The Best Dishes to Try Along Peru's Coast 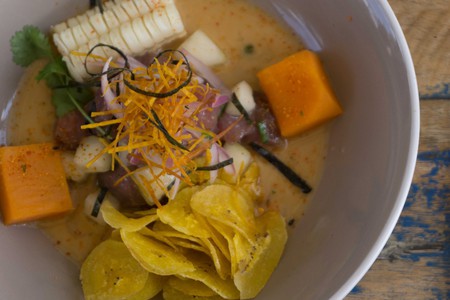 Peru’s dishes vary from region to region – you’re unlikely to be eating fish from the Pacific Ocean in the Amazon. This is what makes Peru so gastronomically diverse, each region has its own unique food traditions and the country’s coastline is no different. With thousands of miles of coastline and some of the most nutrient-rich waters in the world, the food is always fresh and almost always from the ocean. Here is our guide to the dishes you must try along the Peruvian coast.

The northern coast of Peru is well known for an abundance of black clams or conchas negras, which you’ll find as a ceviche option at almost every cevicheria you visit. The dish is similar to any ceviche dish, but instead of fish you add the black clams. If you don’t want only the clams in your ceviche, you can order a ceviche mixto, which will be a ceviche with black clams, shellfish, maybe tuna if you’re lucky and always octopus. Conchas negras are also popular because they’re considered a powerful aphrodisiac.

If you love fried food and seafood then this is the perfect dish for you. Jalea is basically taking everything you can from the ocean, frying it and then topping it with onions, cilantro, limes and adding fried yucca on the side. The Peruvians don’t hold back on what they fry!

When on the coast of Peru, trying ceviche is a no-brainer – you must. It’s not hard to find either, as it’s served almost everywhere. The classic ceviche will include fish, marinated in lime and rotoco peppers, canchitas (corn nuts), yuca, sweet potato, onions, maybe some banana chips and is often garnished with lettuce. It’s so good you may find yourself eating it your entire time in Peru.

While it’s prepared the exact same way as ceviche, it differs in the unique flavors added to the marinade. The chef will add things such as maracuja or citrus to the dish, giving it a completely new twist. Instead of rocoto and lime flavors, the dish can now be spicy, sweet or tart. You wouldn’t have thought that ceviche could get even better.

In the north of Peru, particularly in Mancora, you’ll find restaurants grilling up this delicacy right on the sidewalk in front of their restaurants. Octopus are abundant in the warm current that comes down from Ecuador, which is especially prevalent during Peru’s summer months when the water gets warmer. You can have octopus in your ceviche or eat an entire octopus a la parrilla (grilled). 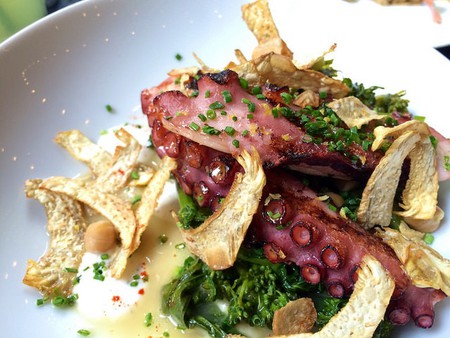 Tiradito is a Peruvian-Japanese fusion that is a cross between sushi and ceviche. The dish uses raw fish, like sushi, that’s cut up into slices similar to sashimi and covered in a creamy, spicy sauce. The dish is usually only found at expensive restaurants, which ensure better sanitation standards for raw fish. While it may seem similar to ceviche, tiradito is not marinated or “cooked” in lime like ceviche, giving it a completely different flavor.

The Parihuela is a spicy seafood soup that originated along the coast of Peru and remains very popular. The soup usually includes fish, octopus, shrimp, crabs and various vegetables. It is a perfect warming dish for Peru’s often cold and always foggy coastline.