The 20 Best Restaurants In Latin America

Astrid y Gastón, Lima | © Heather Sperling/Flickr
While Europe, Asia, and the United States tend to hog the spotlight when it comes to fine dining, South America is quickly rising to prominence on the global culinary scene. There are certain restaurants that deserve recognition for this feat, and we’ve set out to find them. With some astoundingly talented chefs and unparalleled diversity of local ingredients, we expect great things from this continent in the coming years. Here are the 20 best restaurants in Latin America.

Located in Lima, one of South America’s culinary capitals, Central serves gourmet Peruvian dishes. In particular, they are known for their hot ceviche made with corvina fish and langoustine. The tasting menu at Central captures the natural delicacies located throughout the country. The owners, Pía and Virgílio Martínez are husband and wife, and Virgílio has worked in kitchens all over the world including London, Madrid, New York, and Bogotá. Central is not only one of the top restaurants in Latin America; it is also ranked in the top 50 restaurants worldwide. 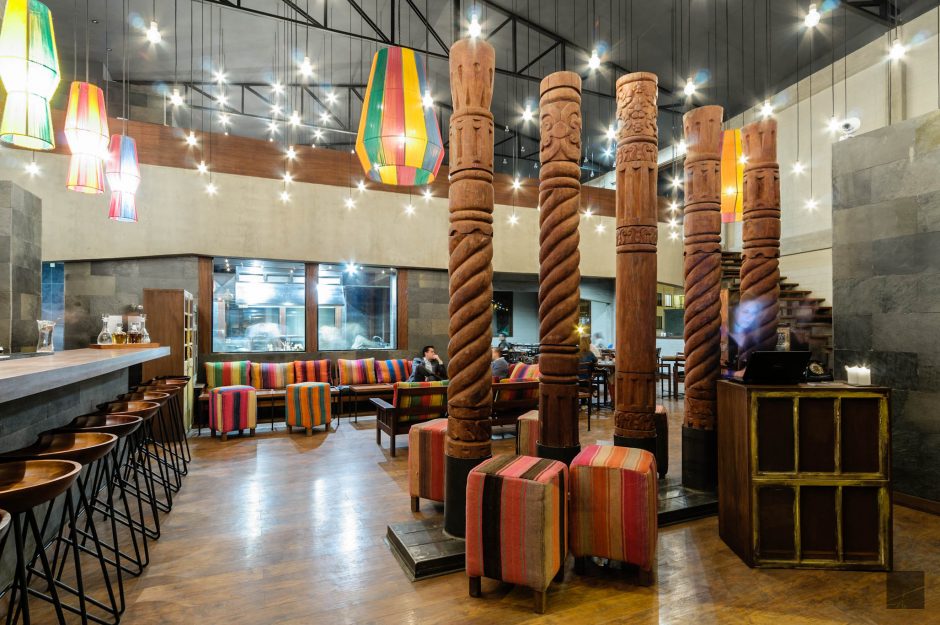 Gustu, which means ‘flavor’ in Quechua, is a Bolivian restaurant that serves the national cuisine in earthy ways. In fact, 100 percent of the food and drinks found here are sourced from Bolivia. The restaurant was originally established by Noma co-founder, Claus Meyer, and today Danish chef, Kamilla Seidler, operates it. If you make it to Gustu, be sure to try the alpaca and palm marrow. Gustu stands out for being a restaurant dedicated to social progress. There is even a school on the property, and many of the restaurant’s employees are students.
More Info
10 Avenue Costanera, Macrodistrito Sur, La Paz, Departamento de La Paz, Bolivia
+59122117491
Visit website

We love when gastronomy gets in touch with natural surroundings. Boragó’s chef, Rodolfo Guzmán is notorious for doing this, and we just can’t get enough. Here you will find unique items like Chilean rhubarb, eel fried in squid ink, and all kinds of fruits native to Chile. Not only are the ingredients fresh and local, but Guzmán’s preparation techniques are like nothing the traditional culinary world has seen before. This posed a challenge in the restaurant’s early years, as many diners struggled to let go of their more conservative culinary ideals. Eventually, the chefs at Boragó defied these deeply held beliefs, and now it is ranked as one of the best restaurants in Chile.

Owned by brothers Jorge and Mark Rausch, Criterión serves up tasty French dishes over the breadth of two seasonal tasting menus as well as a substantial a la carte menu. One of the star dishes on offer is the smoked salmon confit paired with yucca carbon. Mark is a renowned pastry chef, so be sure to save some room for dessert. The contemporary interior features rich purple and gold hues. There is also seating available on the large covered terrace.

Housed in the stunning Casa Moreyra and named after famed chef Gastón Acurio and his wife, Astrid, Astrid y Gastón is an excellent spot to get a taste of traditional Peruvian cuisine. The head chef is Diego Muñoz, who studied in Paris, and also worked in both Spain and Australia. The menu highlights Peru’s biodiversity, and every item on the menu is sourced from the greater Lima area. To be clear, that’s at least 30 courses of ingredients taken from the region. Between the phenomenal food and gorgeous atmosphere, Astrid y Gastón offers an utterly magical culinary experience.

Open since 2007, Alto is a restaurant that serves Venezuelan classics in modern ways. Head chef Carlos García’s creations often come with hints of international inspiration. This is largely because García trained in Spain. Here you will find ingredients like roast meats, arepas, fresh fruits, and coffee. For the chocolate lovers among you, Alto features dishes throughout the menu that are made with locally sourced Venezuelan cacao prepared in a multitude of different ways. Alto is a true national gem with highly touted notoriety. 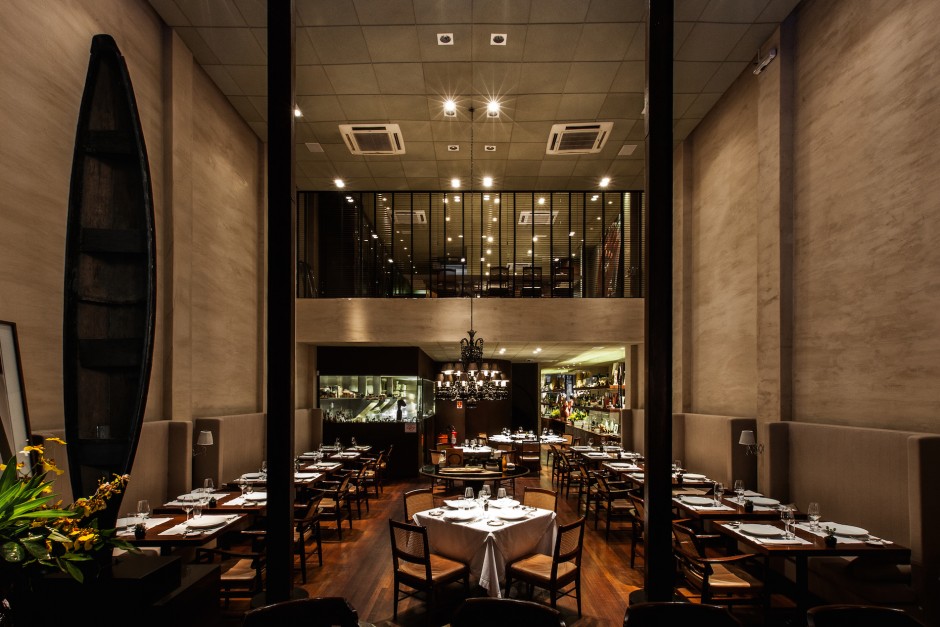 If you find the Amazon Rainforest to be as fascinating of a place as we do, it’s absolutely worth discovering what D.O.M. has in store. That is because the famous head chef Alex Atala is a rainforest ambassador who made waves for his work in discovering new ingredients from the rainforest. Come to D.O.M. to taste these special delicacies. The menu features all sorts of interesting ingredients that you’ve likely never encountered before like the herb, jambú, or priprioca root. The interior is elegant and contemporary.

Another spot for Nikkei fusion food in Latin America is at a Santiago restaurant, Osaka. Here Peruvian cuisine is blended with Chilean seafood prepared in Japanese styles. If you’re having a hard time conceptualizing what this might look like, let’s take a second to go over some menu items. There are gyozas filled with duck confit and caramelized onions, raw tiradito fish with avocado and lime, and shitake mushrooms prepared in a wok with a mixture of Peruvian vegetables and Japanese spices. The restaurant is located inside the upscale Osaka Hotel and run by Ciro Watanabe.

Chila’s chef, Soledad Narelli, is on a never-ending quest to find the best regional Argentinian ingredients and use them in refreshing ways. In fact, she even hosts a television program on Argentina’s food network where she travels around the country looking for the best Argentinian ingredients. One of many outstanding meals you can find at Chila is a dish consisting of Antarctic fish paired with the local variety of succulent plant known as salicornia. For dessert, go with the queso y dulce, a dessert of Lincoln cheese served with sweet potato ice cream and fruit preserves. The restaurant’s interior provides an elegant ambiance to boot.

Located in Mexico City, Quintotil turns traditional Mexican cuisine on its head while head chef Jorge Vallejo also works to create a menu with environmental conservation in mind. Many of the ingredients featured here are grown in the restaurant’s urban orchard. Vallejo worked briefly at the world-renowned Noma in Copenhagen, but much of his approach to cooking was inspired by his time training under the Mexican chef, Enrique Olvera. Quntonil uses ingredients that are specifically native to Mexico in new and inventive ways. For example, one of the more well known dishes on the menu consists of huauzontles, a vegetable similar to broccoli rabe, with cheese from the Chiapas.

The menu at Amaranta offers an exploration of the best of central Mexican cuisine from start to finish. Chef Salas especially likes to get creative with pig in his dishes. One favorite is the pork jowl made with peanuts or pumpkin seeds, but he is also known for turning pig trotters into a type of carpaccio. For the veggie lovers among you, try the cactus salad or beans topped with fresh cheese. Of course, everyone ought to try some local mezcal or tequila as well. There are also more than 300 varieties of wine available as well as a solid selection of Mexican craft beers.

Tegui serves contemporary Argentinian food with beautiful presentation in a posh setting complete with an open kitchen and wine cellar. Head chef Germán Martitegui worked in France and the United States before opening this restaurant in Buenos Aires. He is known for being soft spoken, but his food certainly leaves a lasting impression on his behalf. Martitegui is also on Argentina’s MasterChef, where he acts as the token mean chef. Popular menu items include grilled meats and seafood served with fresh Argentine chimichurri. Everything is served with truly artful presentation.

Pangea offers a fine dining experience, the Mexican way. More specifically, chef Guillermo González Beristáin combines his French culinary background with Monterrey’s phenomenal fresh produce to create a wonderful seven-course tasting menu. There are also some excellent items on the a la carte menu like octopus served with chorizo, chickpea stew, piquillo peppers, and lemon coulis. Another thing worth trying is Beristáin’s braised goat cooked in a craft ale that he brews himself. We recommend eating your meal on the terrace surrounded by palms.

Maní’s menu specializes in Brazilian-European fusion food. This pairing makes sense considering that the two chefs who run the place met whilst working together in Spain. If you’re wondering just what exactly this mixture looks like, the favorites on the menu are the foie gras served with guava jam and manioc flour crumble or marrow with acai berries. There is a courtyard available for dining al fresco, and we highly recommend snagging a table out here. Plus, head chef Helena Rizzo was named the best female chef in the world in 2014.

Roberta Subrack is a highly lauded Brazilian chef. Even though she is now regarded as the best chef Brazil has ever had, she began her culinary career selling hotdogs out of a cart. Subrack ultimately became the head chef at the presidential palace, and now she has a number of personal ventures. At her eponymous restaurant, she makes everything entirely by hand. That’s right. There’s no machinery to be found here, and each plate is prepared specially. A popular menu item is her smoked okra served with vegetable caviar, shrimp and ravioli. Enjoy your meal on the lovely tropical veranda, in typical Rio style.

Pujol is known for its experimental Mexican dishes. While the food may be innovative, it is made with classic ingredients found in Mexican cuisine. Ants and grasshoppers are common components of dishes here. Chef Enrique Olvera is the owner, and he opened his first restaurant at the young age of 24, whereupon he gained national notoriety as one of Mexico’s best contemporary chefs. The interior is simple and clad in earthy timber tones. Olvera recently opened a similar restaurant called Cosme in New York City.

Biko blends traditional Basque dishes with modern Mexican ingredients. This may seem like an obscure union, but it makes sense considering that two of the restaurant’s three chefs are Basque in origin. The menu offers both classic Basque and Spanish cuisine as well as imaginative meals featuring things like candy floss made of foie gras. The interior is modern, minimal, and full of contrasts. The restaurant’s name, Biko, refers to the Basque word for couple, ‘bikote,’ as a symbol of Mexican and Basque culinary cohesion. 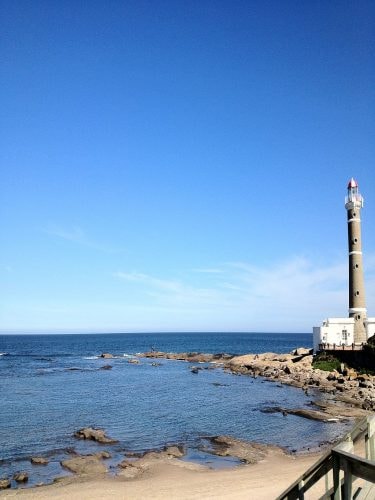 At Parador La Huella you will get utterly spectacular views combined with the culinary creations of head chef Alejandro Morales. When it comes to seafood and grilled meats, Morales is one of the best in the business. Plus, the restaurant is situated right on the beach. It is the perfect place for a relaxed and romantic evening. If you go here on a date, you can sample more plates, right? This is great news because the grilled sea bass and the grilled corvina fish are absolutely worth trying. If you don’t happen to have Uruguay on your next travel itinerary, another La Huella just opened at Miami’s East Hotel. 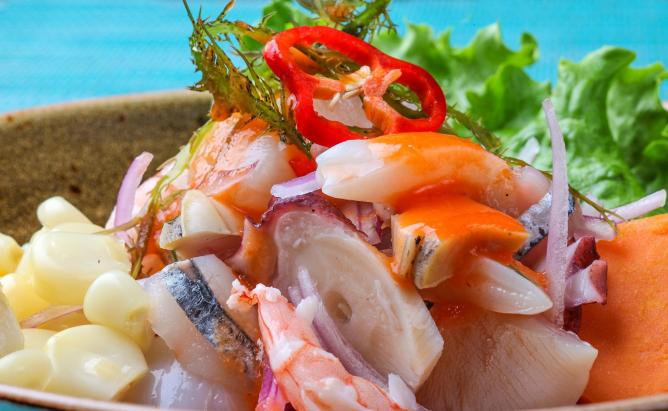 La Mar is aptly named considering that the menu largely specializes in ceviche of all kinds with ingredients like octopus, grouper, shrimp, and sea urchin. Pair yours with a refreshing pisco sour in true Lima style. Rest assured that everything on the menu is sustainably sourced as well. Head chef Andrés Rodriguez learned much of what he knows about cooking from Gastón Acurio, and he previously worked at Astrid y Gastón. La Mar is teeming with excited patrons, and you should expect a wait because there are no reservations. The restaurant is decorated with palm trees and bold colors, which creates a cool, tropical vibe.
More Info
770 Avenida Mariscal La Mar, Urb Santa Cruz, Miraflores, Municipalidad Metropolitana de Lima, 15074, Peru
+5114213365
Visit website