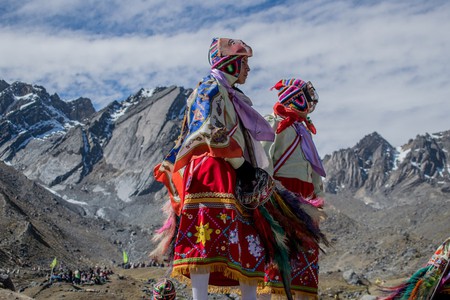 For over 235 years, pilgrims across Peru have traveled to the Sinakara Valley to take part in one of the biggest pilgrimages in South America. Qoyllur Rit’i – or Snow Star Festival – is a 10-mile trek that leads devoted pilgrims to the glacier found 15,400 feet (4,700 meters) high up in the Peruvian Andes. Due to melting ice caps, however, Qoyllur Rit’i 2018 would – sadly – break with tradition.

“¿Estás bien?” Enrique, my Qoyllur Rit’i guide, asks me as he stuffs another wad of coca leaves into his right cheek.

Despite his upcoming 70th birthday, my guide is effortlessly trotting up the steep gravel path ahead of me. Enrique is an Andean local who, having lived in the Sinakara Valley his whole life, has taken part in over 30 Qoyllur Rit’i pilgrimages. I consider myself to be relatively fit, but at 4,000 meters each agonizing step feels like someone laced my shoes with lead, tightened a cord around my chest and spiked my water bottle with vodka for good measure (the light-headedness I felt at this altitude was akin to the feeling you get after your fifth or sixth tequila shot).

I look around for some moral support, but altitude sickness apparently isn’t affecting my fellow pilgrims. As I lean on my makeshift walking pole to catch my breath, Andeans skip past me carrying supplies on their hunched backs: blankets, tents, corn, candles. Carrying half their weight and wearing nothing but sandals and cloth trousers, there is no doubt about it: the Qoyllur Rit’i regulars are putting me to shame.

“How much farther until we reach the Sanctuary, Enrique?” I ask, without trying to sound too desperate.

A fusion of ancient religions

Qoyllur Rit’i is a complex celebration that combines Catholic, Incan and pre-Incan ideologies. During the 16-kilometer journey, we witness how the beliefs are paradoxically intertwined: crosses are carried up to sacred Apus (mountain gods in Quechua), coca leaves are scattered around candle-lit Christian shrines and masked machulas (the mythical first inhabitants of the Andes) have their hands in prayer. 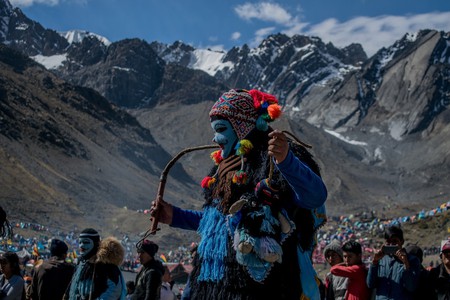 “The indigenous people first made this journey not hundreds, but thousands of years ago. By making offerings to the Pleiades star constellation, the idea was to appease Pachamama (the Earth Mother), or to rekindle our connection with her, so that she will grant good fortune for the year to come. However, when the Spanish arrived, they changed our indigenous celebration to a Catholic pilgrimage. Today, we are left with what you see now. A blend of cultures and beliefs.” 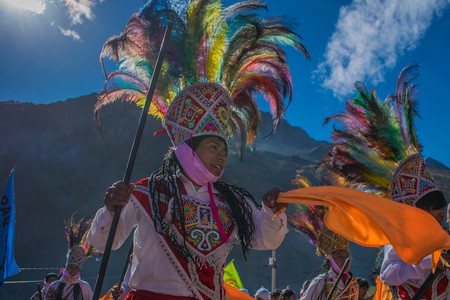 The indigenous people first made this journey to make offerings to a star constellation that disappears and reappears in the southern hemisphere during this time, as well as to their Apus. The idea was to appease Pachamama in the hope that she would grant a plentiful harvest for the year to come. However, the Catholics took interest in the mass pilgrimage in the late 1700s and seized the festivities for themselves after a high priest claimed to have seen Jesus appear at the sacred Sanctuary, the final destination for all Qoyllur Rit’i pilgrims.

After spending three hours trudging uphill past snow-capped mountains, deep valley gorges and llama-scattered plateaus, we finally arrive at what I can only assume is the “Sanctuary.” The steep but relatively calm gravel path that we were following all morning suddenly opens up onto a sprawling tented village. At any other time of year, the area would be a calm, silent green valley hidden high up in the Andes. But today the space had transformed into a sea of blues and reds shaking to the sounds of drums, whistles and the chanting of 100,000 excited pilgrims. 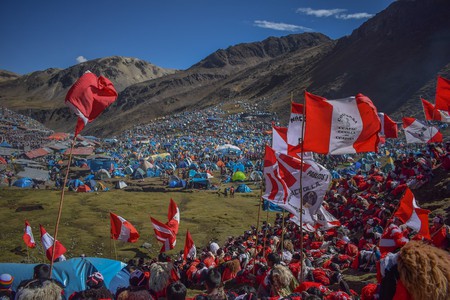 While the valley itself – surrounded by moss-covered volcanic rock and jagged glaciers – is beautifully serene, the scene on the ground is chaos. Without any warning, thousands of masked, sequined and feathered dancers push past us. They are shortly followed by a 30-piece brass band and thousands of supporters carrying life-size saints and giant wooden crosses. Nervous, excited and completely in awe, I fumble for my camera and hit the shutter a thousand times – all while being pushed and pulled by a constantly moving crowd. 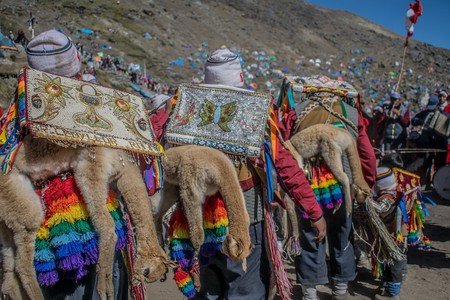 Enrique and I spend the next couple of hours clambering over boulders and squeezing through excited crowds to catch the constant outbreak of dances taking place across the Sanctuary. Each Nation (invited by the Brotherhood of the Lord of Qoyllur Rit’i) brings their own flair to the festival with their unique outfits and style of dance, transforming the Sanctuary into a whirlwind of traditions. The dances, Enrique tells me, mark the beginning of three long days of festivities here, where the groups will battle it out in a kind of cultural “dance-off” between Nations.

Meanwhile, the Catholic pilgrims light candles, make offerings and pray beneath the eight crosses that mark every kilometer of the route. Some even carry their own handmade wooden crosses to the top. 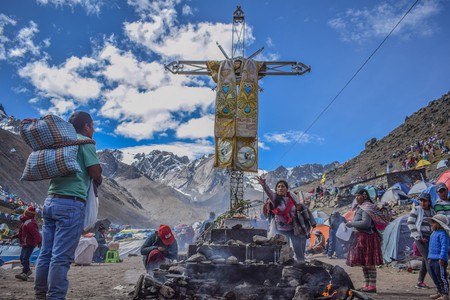 Catholic pilgrims pray at the last cross, which marks the entry to the Sanctuary | © Jessica Vincent 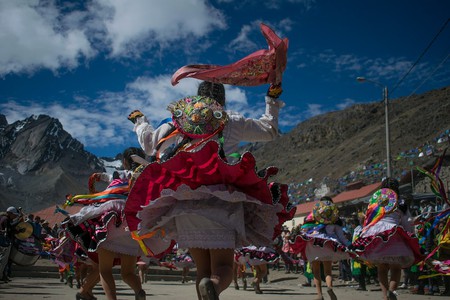 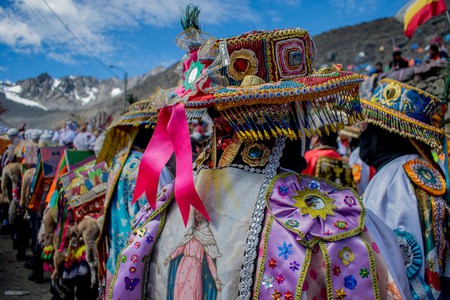 As I watch a traditional whip fight – a dance that represents elders imposing the strict behavioral rules of the festival – I suddenly feel myself being pushed by yet another human wave. This time, however, the whole place is on the move. They are, it seems, all heading towards the glacier. 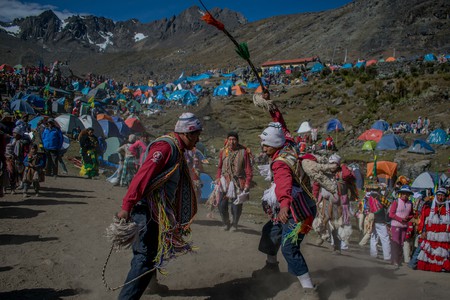 Enrique shouts over to me excitedly, “It’s time for the Ukuku ceremony!”

Since the very first Snow Star Festival, every pilgrim anticipates the time when Ukukus – people dressed as mythical half-man, half-bear characters – climb to the glacier’s summit to collect huge blocks of ice. The melted water from these ice blocks, Enrique tells me, is believed to have magical healing properties, and so it is collected once a year for the local people to drink and perform rituals. By the time we reach the Ukukus, however, Enrique looks up at the glacier and frowns. “I remember when I was young,” he says, “the ice would reach right to where we are standing now.”

I look down, but there is nothing except gravel at our feet. The ice line lies hundreds of meters away. 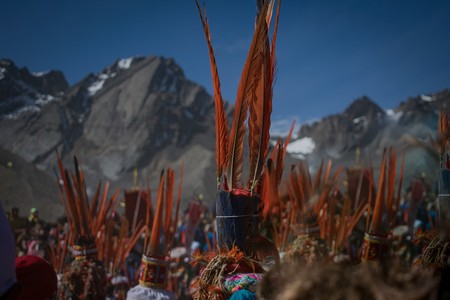 The Ukukus, who have also been making the pilgrimage since they were boys, note that the ice has receded considerably in recent years. To Enrique’s disappointment, we soon find out that this year, due to critically low levels of ice, the Ukuku ceremony has been completely banned in an attempt to protect the shrinking glacier. At Qoyllur Rit’i’s 236th celebration, ceremonies that have been performed on the ice since the time of the Incas will today take place on the rocky cliffs. And the festival’s most important ceremony – the collection of the “life-giving” ice – will not take place at all.

“I am worried,” Enrique says. “Every year, the ice melts a little more. This year we cannot perform our rituals the way we have always done. I fear our sacred Apu will be gone before my grandchildren get to see it.” 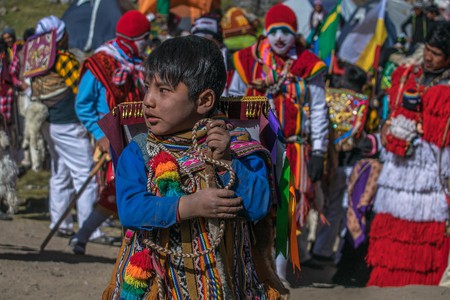 Enrique’s fears aren’t unwarranted. In 1997, the Peruvian government found that their country’s glaciers had shrunk by more than 20 percent over a 30-year period. The National Commission on Climate Change now predicts that Peru could lose all of its glaciers within 40 years.

I come back from trekking Peru’s largest pilgrimage with conflicting emotions. The experience was an amazing one that I’ll never forget – it was, without a doubt, one of the most beautiful and colorful festivals I’d ever seen, and so filled with joy. But on the other end is also loss. Like so many others, I had once again underestimated climate change. Here, I was able to witness first-hand how it not only threatens our planet’s delicate ecosystem but also has the potential to wipe out thousands of years of culture and tradition all over the world. 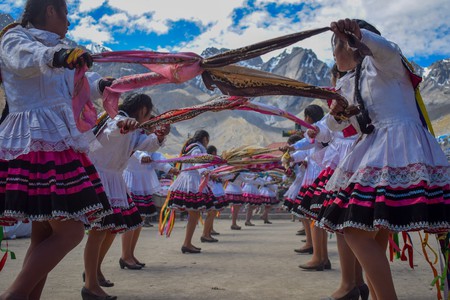 Climate change will not just affect the environment, but cultures too | © Jessica Vincent
Give us feedback