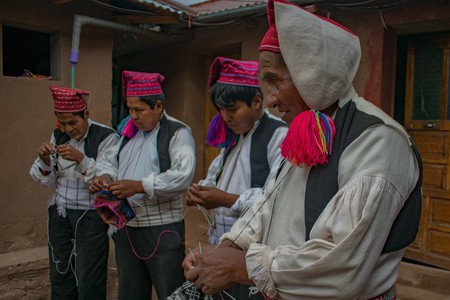 A small island on the Peruvian side of Lake Titicaca, Taquile is known for producing some of Peru’s best-quality textiles and clothing. What few people know, however, is that the making of these intricate, hand-knitted crafts is an activity exclusively reserved for men and is a tradition that has played a major role in Taquile’s complex social hierarchy for more than 500 years. Culture Trip visits the community of male knitters to find out more.

Taquile’s hand-knitted textiles are considered so special that, in 2005, they were named Masterpieces of the Oral and Intangible Heritage of Humanity by UNESCO. But worldwide recognition, or even the little money they make from their expertly crafted products, isn’t why the men of Taquile have dedicated their lives to knitting since the time of the Incas. For Taquileños (men from Taquile), knitting – which is seen as a highly intricate and creative skill – is a way to publicly show your worth to the whole community. 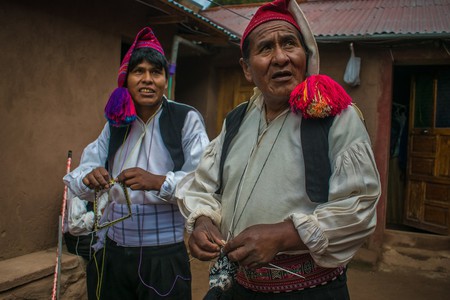 The importance of the knitted chullo

The most important piece of a Taquileño’s knitted ‘uniform’ (which all men in Taquile must wear) is their chullo: a large, floppy hat worn high on the head. The hat’s primary function is to indicate whether a man is married or single (a red-and-white hat means the man is single, while a red/pink hat means he is married), but it also represents several other more complex meanings, such as the man’s aspirations and dreams (displayed in the tiny, intricate designs at the base of the hat) and, depending on how the chullo is worn, a public display of his feelings (if the top end is placed to the right, it means he is happy, while the left side suggests he is worried or sad). 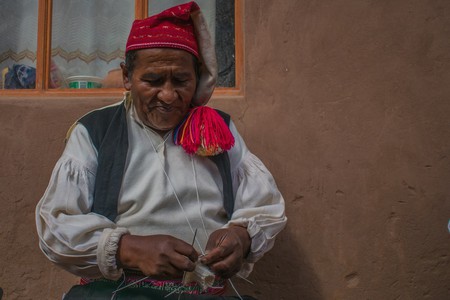 62-year-old Justino's wife recently died, so he now wears a red hat to the left side, indicating he is no longer married and is in mourning | © Jessica Vincent

The chullo plays a particularly important role when a man wants to marry a woman. No matter what other amazing qualities he might possess, he needs to first and foremost demonstrate that he can knit. Typically, he does this by drinking water out of his best chullo hat in front of his future father-in-law. If no water drips through the hat, it means he has solid knitting skills – making him a good marriage proposition. 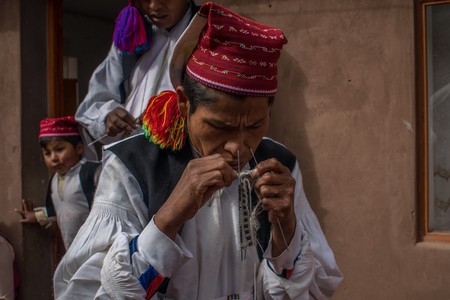 With so much resting on a man’s knitting ability (marriage is considered the single most important stage of a Taquileño’s life), boys start their training at eight years old, and will continue knitting several hours a day for the rest of their lives. 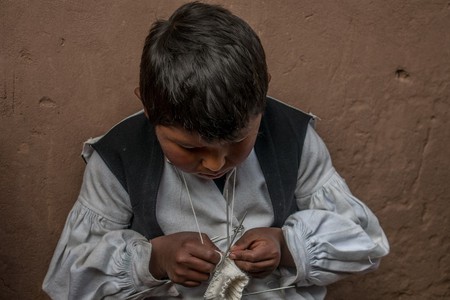 An eight-year-old boy has already begun his training, led by his father and grandfather | © Jessica Vincent

What about the women?

While knitting may be reserved for men, the women also play their important role in weaving Taquile’s complex social patterns. They are in charge of spinning and dying the wool, and you can always see the women – clad in their typical uniform of a red sweater and black chuko (headdress) – speeding through the cobblestone streets while expertly spinning their sheep or alpaca wool using a handmade wooden spindle. The different colors of the wool are achieved through natural dyes made from vegetables and minerals found on the island. 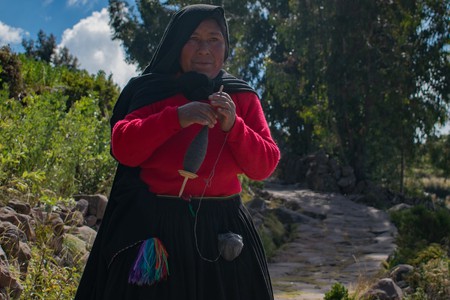 The women are also taught from a young age how to weave using the traditional backstrap loom, believed to be the oldest type of loom in the world, made from wood, string and bone. With these ancient looms, and with the help of a llama femur bone as their pick, they create the intricate, storytelling chumpi: the thick, cummerbund-like waistbands worn by all men in the community. 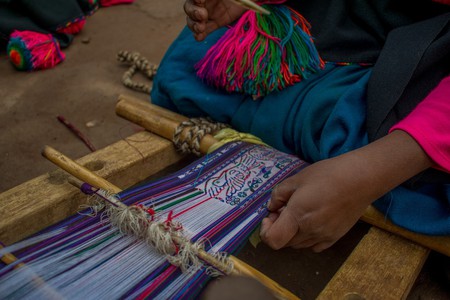 When a woman is to be married, just as the man had to prove his knitting skills with his chullo, she too shows off her weaving abilities by gifting her husband-to-be two symbolic chupis. The first is made from her own hair, and will serve as a bottom layer to the second, more intricate waistband, which is weaved from colorful sheep or alpaca wool. 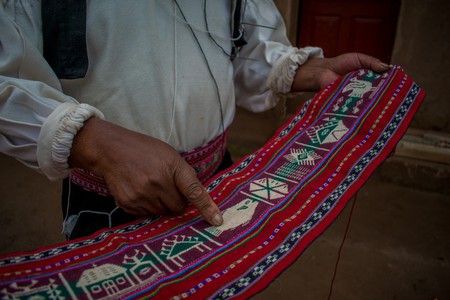 In this second belt, she will weave her aspirations of marriage into a calendar, with each wish – a large and healthy family, fertile lands for their crops or a comfortable home, for example – corresponding to a different day of the year. For this reason, there are always 12 images on the engagement waistbands. 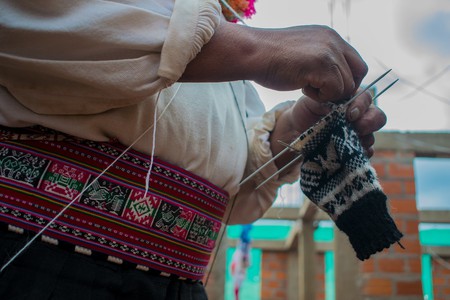