Machu Picchu's Sacred Sister is About to Open to the Public

An investment by the Peruvian government will bring new-found popularity to some Inca ruins that have been lying in obscurity because of their remote location. Similar in construction to the much more well-known Machu Picchu, Choquequirao lies on top a of a steep mountain and served as a final citadel for the Incas in their retreat from the Spanish conquest. A massive proposal including roads and a cable car would make these ruins much easier for visitors to see and enjoy. Here’s what you need to know about the investment and the Choquequirao ruins.

High in the mountains of Peru lies another lost city of the Incas, but because of the difficult five-day trek required to get here, it remains lost to most tourists. Only the most adventurous and intrepid make the grueling trek, and that’s usually after they have already checked Machu Picchu off the bucket list. With stunning views similar to the famed city of Machu Picchu, the Choquequirao ruins are unpopular and obscure amongst travelers purely a result of their inaccessibility, which the government of Peru hopes to change by adding a road and maybe a cable car to this lesser-known Inca city.

In an effort to increase tourism to a country that already sees a lot of it, the Peruvian government plans to invest in roads and cable cars to the “sacred sister” of Machu Picchu. Each year, Machu Picchu sees about 1.2 million visitors, while because of its remoteness, Choquequirao sees only about 5,800 a year. The proposal will add another remarkable ruin to the already large collection of must-see Inca ruins in Peru. Choquequirao is only about 40 miles (64 kilometers) from Machu Picchu, which means that a tourists’ circuit between these two beautiful ruins should emerge and stimulate the local economies.

Aguas Calientes, known mostly as being the little town you stay at before you go to Machu Picchu, was nothing more than a typical small Peruvian mountain town before the explosion of tourism to Machu Picchu began. When you walk through the little pueblo, you can see the change the tourists have brought to the area, both the good and the bad. The injection of tourism and money that is planned by the Peruvian government will most certainly alter the landscape of other remote pueblos near Choquequirao. 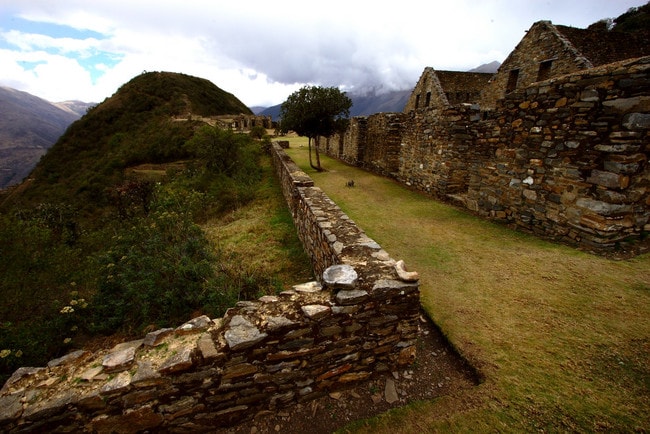 Choquequirao is an Incan ruin with a similar structure and architecture to Machu Picchu, which is saying a lot considering how remarkable Machu Picchu is. The site is made up of multiple terraces and temples, of which only about 40% is uncovered; the rest is swallowed up by jungle growth. As with Machu Picchu, the site’s purpose and functions remain somewhat of a mystery. It is believe that it served as the gateway to the jungle citadel of Vilcabamba, the lost city of the Incas that Hiram Bingham was searching for. It was one of the last strongholds of Manco Inca, the last ruler of the Incas, who fled Cusco and other sites that the Spanish occupied. The site is also well known because of the white llamas on the walls and terraces.

Explore the other ruins in Peru that aren’t Machu Picchu.