Is This Peru’s Most Patriotic Restaurant? 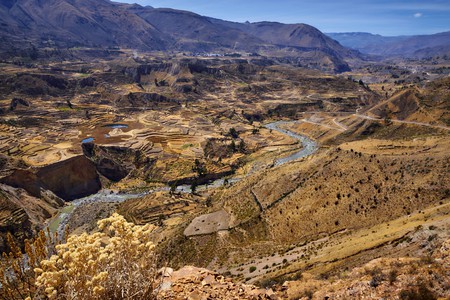 Many restaurants may claim to be the most patriotic in Peru, but none can compare to the unique menu of Central Restaurante, which incorporates ingredients from all over Peru’s diverse landscape. Chef-owner Virgilio Martínez Véliz scours the country for little-known indigenous ingredients in the Amazon and Andes mountains, which is why no other restaurant can lay claim to being Peru’s most patriotic and pioneering. Check out our guide to Central Restaurante, a celebration of Peru’s rich biodiversity.

There are different ways of showing patriotism. You could paint your country’s flag on your face and adorn yourself in your country’s colors and shout the national anthem until you become blue in the face. But, of course, there are other, more subtle and profound ways to show patriotism. At Virgilio Martínez Véliz’s Central Restaurante, you won’t find a giant Peruvian banner on the walls or the walls decorated in Peru’s red and white colors. But his food, in every detail, represents the great diversity of the country in a way that hasn’t been done before. Go on a tour of Peru’s rich biodiversity and history through Martínez’s dishes.

The first thing that will first strike you about his dishes is their artistic presentation. Martínez will sometimes use rocks and stones instead of plates to give the customer a better feeling for the food and the area where it comes from, adding dashes of colors here and there with herbs and sauces like a painter would with their brushstrokes. With a clear mission to value the biodiversity of the Peruvian landscape, Chef Virgilio Martínez presents you with a novel cuisine organized by altitudes so that each dish features ingredients from a similar area. Enjoying Central is surrendering to a subtle travel experience through the senses and Peru’s landscape. The dishes that you’ll sit down to eat seem more art than edible until you try them. With food gathered from different elevations and climates, the tastes are both organized and something you’ve never experienced before. You can choose a vegetarian option or elect for an eight- or 17-course meal.

Martínez first opened his restaurant to great reviews and responses from his customers. They’d tell him that it was like eating in New York or London, remarks that were meant as compliments, but which Martínez took differently. He wanted something Peruvian, a restaurant that celebrated Peru’s history and diversity, not something found elsewhere in the world. He then took a year off to travel around Peru, which opened his eyes up to everything that the country had to offer, the life outside of the Peruvian capital of Lima. He encountered local producers, unique ingredients and indigenous traditions that inspired him to create something that was both delicious and uniquely Peruvian. His transformation is perhaps best documented in Chef’s Table, the Netflix documentary series on world-renowned chefs.

Another reason why Central is Peru’s most patriotic restaurant is its close relationship with local farmers and producers. Some of the products used in Martínez’s restaurant are only found high in the Andes or deep in the Amazon, requiring local help in procuring the rare ingredients. In this way, by purchasing local when possible, the restaurant is working with the people of the country and bringing recognition to little-known areas of the Peruvian map.