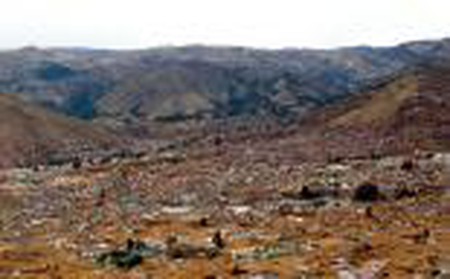 Inspired by a close friend who grew up in the city, Elizabeth Evans travelled to Cusco in southeastern Peru where she gained an insight into Peruvian family life which challenged her assumptions about the country.

Cusco is a place unlike any other, the guidebooks will tell you. A local tells me: ‘Our ancestors called it ‘el ombligo del mundo’ which means ‘bellybutton of the world.’ It is the home of great Inca spirits. After you visit, it changes you.’

In the eyes of its youngsters, the navel of the world is like any other provincial corner. They go out dancing, drinking and tell you how nothing ever happens in this one-horse place where they live. ‘If you want to experience things, you have to go to Lima,’ explains Fabricio, a hopeful violinist, classically trained. Quieter and more thoughtful than most of the young Cusqueñian men I meet, he adds: ‘Here there’s nothing for me to do.’

In Lima I could learn about music and play. Here there is pan-piping for tourists on the mountainside. Fabricio doesn’t actually say this, but during my stay I work this out for myself. We’re chatting on the steps outside an entrance-way, typical of Cusco’s old town side streets. Requisitioned Inca stonework makes up the walls and the doorway. Inside is the atrium of a colonial Spanish style house where he attends lessons. ‘I wonder what it’s like to play in a real orchestra’, Fabricio wistfully imagines. 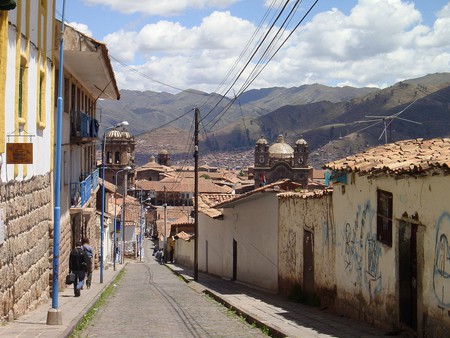 I came to Cusco because I wanted to understand a dear friend of mine. Anita was like a big sister to me during my early twenties. Like most young women in Cusco, Anita had worked in tourism: ‘We would have parties with the LanPeru pilots who flew in from Lima.’ I could easily imagine my charming friend, short slick black bob and stylishly turned out, sipping champagne with young pilots. ‘It was fun but I wanted more for my brain and my life.’

At the time I knew her, Anita was completing her doctorate in her chemical engineering. She would drive me to campus in her spluttering Beetle and show me the progress of her lab experiments. We’d share intimate details of our relationships and she revealed that a visiting German student had asked to be her boyfriend. ‘Is he really your boyfriend?’ I asked incredulously, ‘You’ve never really talked about this guy. Do you like him?’ The next university vacation, Anita visited Thorsten in Germany. She sent emails telling me she was enjoying the European summer and eating lots of ice-cream and cake. She returned with the announcement: ‘I’m engaged.’

‘But Anita, do you really love him?’ I asked in my shocked naiveté. I was crestfallen. In my mind my talented, sparky, multi-lingual, fun-loving, intelligent friend could choose to be with any man she wanted, any man her equal. Why the urgency for this man? ‘Thorsten is a good man. He will make a good husband,’ she replied evenly.

Because I’ve been brought up believing in the superiority of the Northern ‘ticket out,’ I thought I knew what this was about. So I judged her – this was a passport marriage. I wanted to understand why. 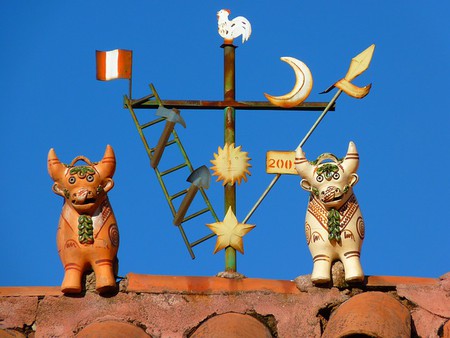 It’s a crisp April afternoon when my flight, one of the last for the day, touches down into Cusco’s small airport. We’re welcomed by dancing Incas, full-grown men in costume. My heart sinks at the cheesiness of it. I’m more interested in finding my suitcase intact.

Anita’s younger sister meets me. She directs the taxi to Tercero Puente (the third bridge) where I’ll be boarding, in US dollars per week, with an old school friend of Anita’s. Her sister invites me to join the family for tea once I’ve settled in.

My host family has cleared the bed of what has become a dumping space since the last teenage occupier – one of the now grown-up children – had moved out. Posters of young Ricky Martin and Enrique Iglesias are blue-tacked on the wall for company, a little torn at the corners. The linen, it seems, has not been changed. The sheets are speckled with mosquito blood, I hope.

To get to the kitchen and bathroom, you cross a concrete-floored open-air utility atrium. On the frosty mornings and during icy nights you brace the cold to eat or conduct ablutions – cold showers with a dishtowel for drying.

Each weekday afternoon four little grandchildren come round after school. Together we watch Bob Esponga (Sponge Bob) on the television and draw animals on the inside covers of my notebook. Mariposa, perrito, gatto. The only animals I can label in my limited Spanish.

At dinner, the father of the household nods: ‘Today it is cold, yes?’ He passes along the chopped chilli’s. ‘Frio,’ I nod back. So it goes each evening. The grandchildren wiggle in their seats while grandma dishes out the meat and vegetables strained from the boiling broth we’re eating as the first course soup. 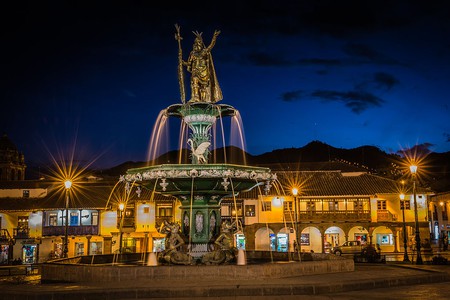 Even though Bob Esponga sings ‘Feliz Navidad’ (Merry Christmas), it is April and time for the all important procession of El Señor de los Temblores. Subsequently I find out that Che Guevara had witnessed the procession on his famous Motorcycle Diary travels in 1948. Compared with his observations, my experience is far less politicized. My brief glimpse of El Señor above the crowd is eclipsed by the domestic distress of buying extra biscuits to make up the missing dish for doce piattos (twelve dishes), a dish for each of the twelve disciples. One too few and the household will be cursed. ‘Can’t we just divide one dish across two plates?’ No, no! I don’t understand.

Before I leave Cusco, I visit Anita’s parents for tea. In the corner of their tiled kitchen, I notice the fridge-freezer. Most homes don’t have fridges and I’ve lived without one all the months I’ve been here. They tell me Anita married Thorsten in a small civil ceremony outside Berlin. Anita hasn’t yet sent the photographs. ‘She wore blue,’ her mother tells me, not quite sure what to make of it.

Anita and I lose touch after my Cusco visit. A few years later I’m preparing a trip to Germany, so I email her. She has moved, is expecting her first child and has a specialist’s position with a German pharmaceutical firm. Her new home is off my route, so I won’t be able to visit her. She asks at the end of her email: ‘Have you found your German?’ I don’t reply to her question. What should it matter – a person’s nationality.

Now older, I am at the age Anita was when we first met. I have caught myself thinking: ‘He is a good man. He would make a good husband.’ I have moved North. Out of my own navel, I see more clearly how the world works and I feel ashamed that I judged my friend. 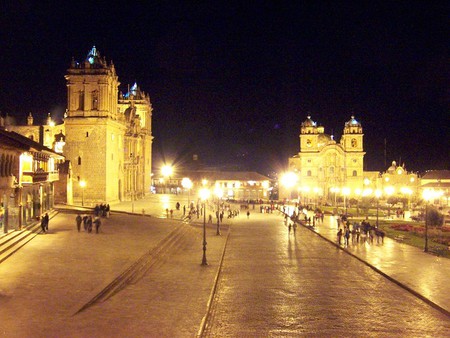 In my adopted neighbourhood, here in the North, I volunteer at the local soup kitchen. Many of us are great travellers, so we chat about the world and our adventures – past, current and future. John, who is Irish and proud, works at a popular Latino bar and restaurant. Next year, he’ll be visiting the Philippines for four weeks. I ask if he’s been before (he has), and in delicate, round-about ways if he has any idea of his cachét as a possible passport. He asks me what I’ve been doing these last couple of days.

‘I’m writing an article about Peru.’ His eyes light up. I try to explain it’s not a typical tourist’s insight on Peru, but he’s already gesturing with excitement.

‘Are you on Facebook? I must introduce you to a friend of mine. He’s engaged to a Peruvian. In fact, I introduced them to each other. She worked at the bar.’

‘Is your friend English…” I was about to add, ‘or Irish?’

‘No,’ John interrupted, ‘he’s German and quite a good photographer.’