Ceviche: How Peru's Most Treasured Dish Became a National Phenomenon 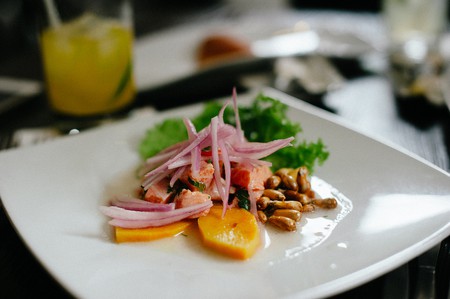 Machu Picchu is among the most popular reasons why people travel to Peru. The country is not short on history and beautiful landscapes, but it’s now known for things other than the Incas. Peru has recently become the gastronomical capital of Latin America and has done so on the back of their favorite dish, ceviche. The dish is simple, yet complex, and nothing short of delicious. Ceviche, a common, everyday meal, has exploded in worldwide recognition and has marked Peru and Lima as essential for food lovers. Here is our guide to Peru’s most famous dish.

The true origins of ceviche are somewhat murky, but the current iteration of the food – marinated in limes – originated sometime after the arrival of the Spanish with said limes. Limes aren’t native to Peru so before the introduction of the citrus, Peruvian ancestors were most likely using some other marinate. There is some debate about where the dish actually began – either Peru or Ecuador – but what is for sure is that Peru is obsessed with the raw seafood dish, so much so that it inspired a national holiday.

The most important ingredients of Peruvian Ceviche are the Peruvian lime – which Peruvians will tell you is the key to ceviche and the Pisco Sour because of their country’s lime’s unique ph level – the aji amarillo pepper, and rocoto pepper, which looks like a red bell pepper, but is very spicy. Rocoto is sometimes garnished on the dish as a decoration, so be careful – it may look like a slice of bell pepper or a tomato, but it isn’t. A Peruvian plate of ceviche will also include canchitas (corn nuts), yuca, sweet potato, onions, maybe some banana chips, and is often garnished with lettuce.

Ceviche is marinated in a lime-based mixture with onions, aji and rocoto peppers. The citric acid from the limes “cooks” the fish so that it can be eaten straight away. While the acid of the limes will allow you to eat it raw, the acid marinade will not kill bacteria or parasitic worms, unlike the heat of cooking.

Perhaps Lima’s biggest tourist attraction is its gastronomy. With so many ceviche options and world-class chefs preparing them, it is no wonder people brave the gloomy weather of Lima for a bite to eat. Grey skies can be tolerated with a full belly of delicious food. With the explosion of tourism in Peru, there has been an increased demand for its cuisine. Peruvian food is now exported all over the world – a city near you will most likely have a Peruvian restaurant serving up ceviche and other traditional dishes. With so much attention on its chefs and culinary traditions, Peru has become increasingly proud of a dish that has been largely taken for granted because it is consumed so routinely. With a holiday to its name and cevicherias all over the country – you’ll easily find them no matter where you are in Peru – the obsession is real. The whole world is now clamoring for Peruvian food and especially ceviche, something Peruvians have been quietly consuming since time immemorial.