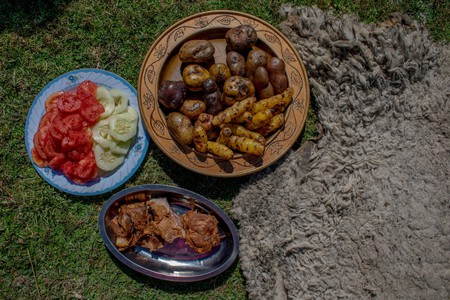 The Pachamanca—a traditional, usually celebratory, meal cooked under hot stones—has been a popular dish in rural Andean communities for centuries. It’s even believed by locals to pre-date the Incas. In Peru’s remote mountainous Ausangate region, families still prepare the Pachamanca using traditional methods and ingredients. Here’s how they do it.

The first step to making a pachamanca is to create a small, makeshift oven from stones locally known as a huatia. First, they clear an area and circle it with hay; they’ll use this later to cover the oven as an insulation layer. They then begin to build the oven, putting larger rocks at the bottom and then piling smaller rocks on top to create a dome-shaped oven. They leave a small opening with enough space to pile in cardboard and some alpaca manure; this will be used to light the oven. 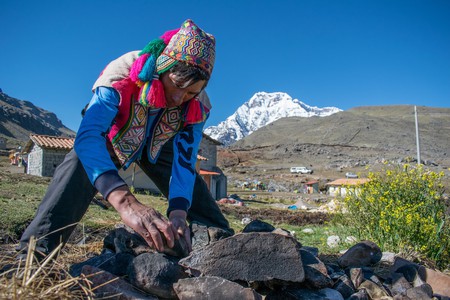 The first step to the pachamanca is making the stone oven, locally known as a huatia | © Jessica Vincent

Step 2: get the oven super hot

Before they can add any food, they need to ensure that the oven is really hot. To do this, they light the manure and place it in the small opening in the rocks and, for almost 40 minutes, constantly feed it with wood and pieces of cardboard to keep the fire going. To help it along, they blow into the opening (every 5 minutes or so) using a hollow metal rod, forcing the flames to spark and glow violently. Slowly but surely, thick clouds of smoke start to rise out of the cracks in the stones. Within minutes, you can feel the intense heat coming from the ground, growing stronger each time air is blown into the opening. 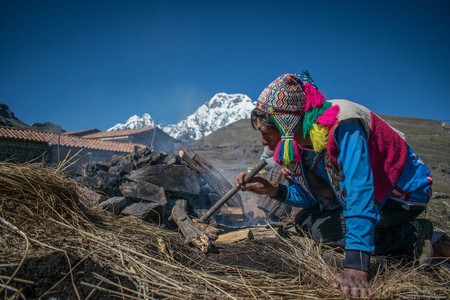 Learn to make pachamanca, a pre-Incan tradition where meat and potatoes are cooked under hot stones | © Jessica Vincent

Next, it’s time to prep the ingredients. What goes into a pachamanca can vary, but it always consists of some form of meat and potatoes. Popular meats for the pachamanca include pork, cuy (guinea pig), lamb and alpaca. As they have their own alpaca farm, the family tells us that today we’ll be preparing an alpaca pachamanca; which is considered one of Peru’s leanest cuts of meat. Whilst someone in the family keeps an eye on the fire, Enrique, the father, starts preparing the alpaca meat that he had killed and prepped that morning. He rubs the alpaca with a marinade of chilli, garlic, salt, lime juice and olive oil. 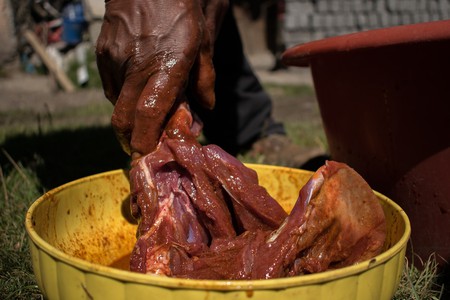 The alpaca meat is marinated in chilli, garlic and lime juice before placing it in the oven | © Jessica Vincent

Meanwhile, the women sort and clean the potatoes that had also been picked from their potato patch that morning. 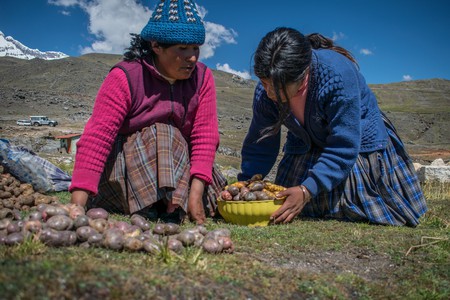 The women in the family prepare the potatoes | © Jessica Vincent

Step 4: get the ingredients cooking

Once the oven has heated to the right temperature (they somehow just know when it’s ready—no thermometer!), it’s time to put them in the oven. The whole family then get to work quickly removing the top layer of the rocks (using only pieces of cardboard to protect their hands from the flaming hot stones). 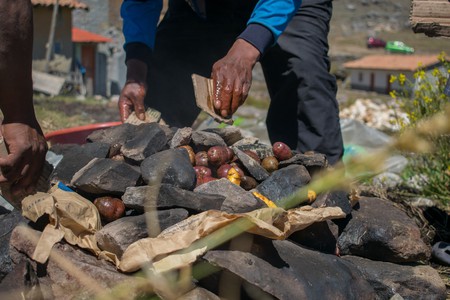 They then place the alpaca—which moments before had been wrapped in a piece of paper to protect it from the dirt—down on the base of the oven. It is then covered with the same stones that they had removed, later it’s topped with the potatoes; a kind of rock-alpaca-potato layer cake! 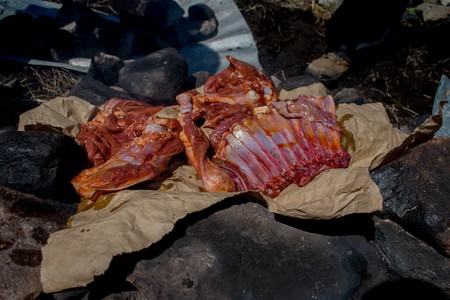 They do this whole process in just a few minutes to avoid losing too much of the oven’s heat. Finally, they cover the oven with a layer of hay, followed by a plastic sheet and, finally, top it with several spadefuls of earth. This clever insulation system—passed down from hundreds of generations—ensures that the oven stays at the perfect temperature to (hopefully) cook our potatoes and alpaca meat to perfection. 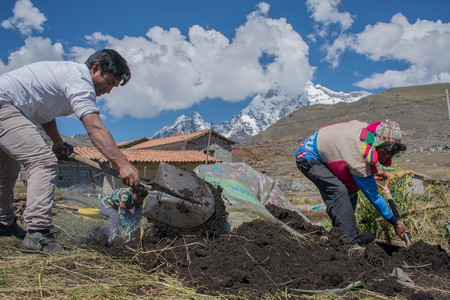 The family cover the oven with a layer of hay, earth and a plastic sheet for insulation | © Jessica Vincent

Now there’s nothing left to do but wait for the alpaca to cook through and the potatoes to soften. Enrique tells us that this normally takes around an hour. While we wait, we sip freshly brewed coca tea while the kids show us their Quechua homework. 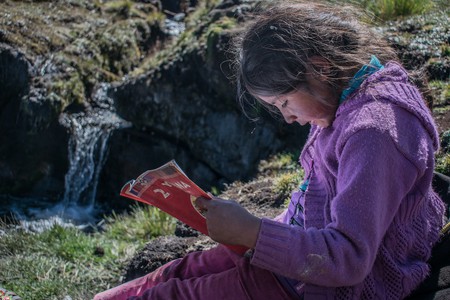 While we wait for the food to cook, the kids show us their Quechua homework | © Jessica Vincent

As promised, an hour later it was time to uncover the oven and carefully take out the food from under the red-hot stones. As soon as the earth, plastic sheet and hay layers were taken away, the smells of smokey meat, earthy potatoes, and spicy, garlicky herbs fill the air. This was going to be incredible. 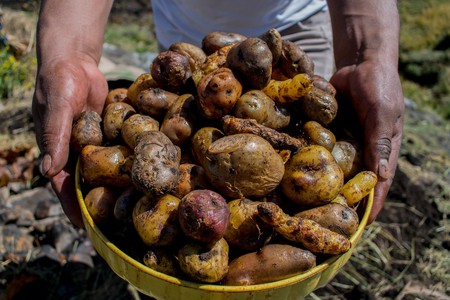 So, the result? Deliciously tender, perfectly seasoned alpaca with a hint of paprika-like pepper and garlic. And the potatoes? Well, you’ve never tasted a potato like it: smokey, firm skin with a fluffy, earthy inside, with each type of potato (they have hundreds of varieties here) offering a different burst of flavour. As is tradition, the dish is served in big sharing bowls—along with some tomatoes and cucumber—outside on the floor, with alpaca skins as our comfy dining chairs. Bon apetit!

A traditional Pachamanca: spiced alpaca and potatoes served with a tomato and cucumber salad | © Jessica Vincent
Give us feedback