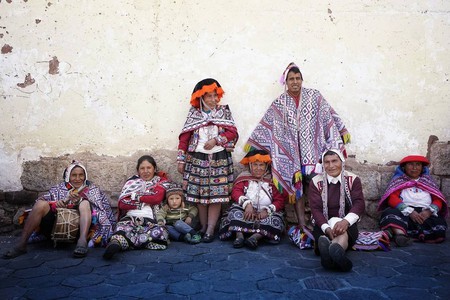 As you walk down Cusco’s narrow streets, it’s not the cobblestoned streets and Inca stones or the colonial facades and balconies that will catch your attention, and it’s not the grand churches with intricate carvings, or the ancient ruins. Sitting on the sidewalks in bright clothes, often holding an alpaca to pose for a photo, are the women who bring life to the streets of Cusco. Dressed in traditional garb, they are unmistakeable, and you’ll find them in everyone’s holiday pictures. Here is a brief history of the vibrant and unique clothes that these women wear.

The outfits that you see today are influenced both by pre-Spanish traditions and by the colonial styles of clothing that were brought to Peru. What is considered traditional today is a combination of the two influences. Women wear bright embroidered skirts, little jackets and cardigans, capes or shawls, and little Andean hats, creating a fusion of traditional and modern wear. Men’s traditional clothing has been rather more more lost to time, but you’ll still find knee-high pants worn with ponchos. 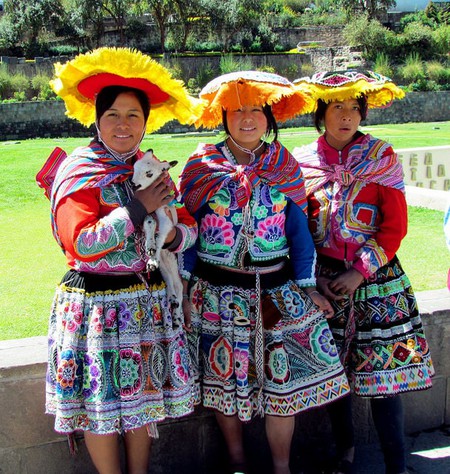 These hats are the first thing that you notice about these women, because they are unique and because they vary so much in style. Some are very small and look like little fedoras tied around the women’s heads, while others have wider brims and may have a cloth that hangs down. Most, if not all, will be decorated with bright colors and a variety of textures.

This is a Quechua word for a shawl-style rectangular cape that the Quechua women wear around their backs. The woven square cloth wraps around their shoulders and ties in the front with a safety pin of some sort. The colors of the llicllas vary, but they will usually be very bright, with designs woven into them. They aren’t just used for show, or to keep warm; the shawls are also used to carry children in, as well as items that they may be selling on the streets, such as alpaca sweaters, scarves, or key chains. 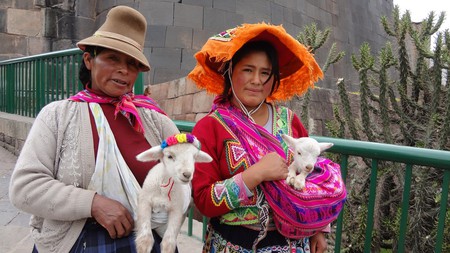 These are the little jackets that the women wear under their llicllas. They are usually very vibrant in color, with other bright patterns woven onto the jacket. Some of them will also have colorful buttons and trimmings.

These are the famous skirts that the women always wear. They are long, flowing black skirts that usually go right down to their ankles and are always decorated with bright stitching and colorful designs.

Walking around the streets of Cusco, you won’t find the men dressed up in the same way as the women are, in traditional outfits from head to toe. The men will be wearing modern clothes: maybe an Andean beanie with flaps that covers the ears, or a poncho. In the Andean countryside or in small pueblos, you’ll find men dressed in knee-high pants, ponchos, and beanies.