8 Things You Need to Know About the Andean Condor 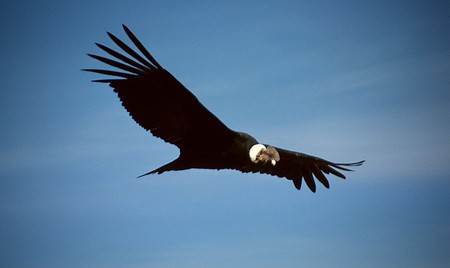 One of the luckiest things that can happen to you while traveling through the Andes is to see a condor. Whether it’s flying, eating or resting, a condor sighting often occurs in very elevated areas, with their nesting sites at 16,000 feet above sea level. These majestic birds are some of the largest flying animal in the world, which has given them a mythical reputation in Andean cosmogony. With a near 11-foot wingspan, the sex of a condor can be determined whether they have a white collar around their neck (male) or not (female). Find out other interesting facts about the Andean condor that you probably didn’t know.

During an event organized by the National Forest Service in Lima in 2015, international experts announced that less than 2,500 condors were left in Peru, whereas in Ecuador, the number dramatically dropped to almost 100. Argentina had the highest number of condors at 10,000. Deforestation, animal trafficking, pollution of their food (i.e. glass that cuts their insides) and the indiscriminate hunting of condors for their feathers or bones are causing numbers to drop. The conservation of the species is now done in situ and ex situ. 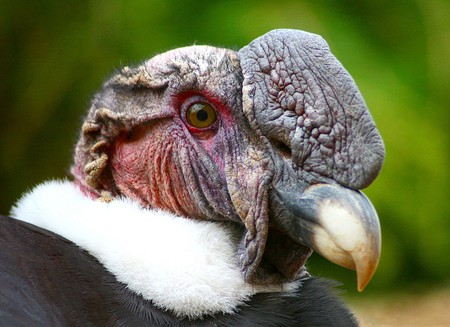 Male condors have white feathers in their necks | ©Keven Lau/WikiCommons

They can fly long distances

Although the Andean condor mostly resides in the highlands, their appearance on beaches and other coastal sites has been documented over the years. As scavengers, they have been seen on deserted beaches, eating dead fish or algae washed up on the shore. Their need to find food will force them to great distances – often more than 120 miles a day – to reach islands, where they feast on other birds’ nests, penguins and seals. Condors don’t have big pectorals, meaning they mostly have to glide and take advantage the air current and their long wings.

Condors only eat carrion and clean up the environment

Condors are vultures, meaning they feed off dead animals and decomposed food. They’re credited for cleaning the fields and stopping the spread of diseases from sick animals. 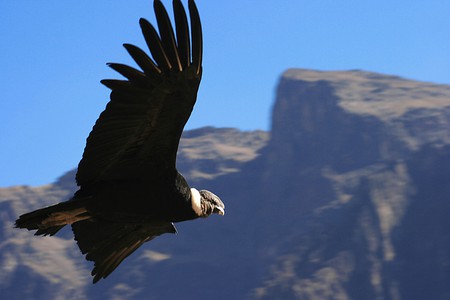 Condors are not natural hunters. Their body isn’t made for hunting. Their claws are round and short, the complete opposite of an eagle used to catching prey with strong and sharp claws. Condors can kill animals, often medium sized sheep and young alpacas in case they can’t find food. Once they locate their next meal rotting somewhere, they begin to circle the area and slowly start descending once they’ve made sure they’re alone. Condors can spend more than four days waiting for the right moment to start feeding.

A normal condor weighing more than 30 pounds can eat up to almost 10 pounds of food in one sitting and be fine to fly. But sometimes condors end up eating more than they can handle and that makes their flight difficult. They usually have to rest until they’ve digested their meal. 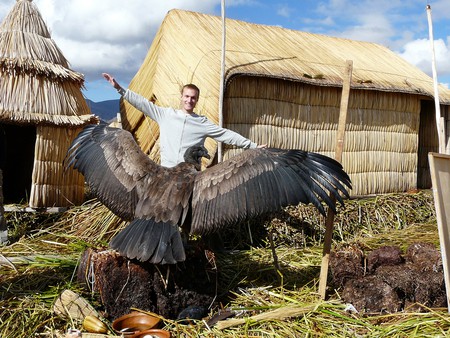 They can live up to 75 years

If kept captive, condors can live up to 75 years, but some Andean cultures believe that condors are immortal. Their mortality rate in nature is as low as their reproduction rate – they don’t start breeding until age five or six – which is another reason why they’re endangered. If their long lives are cut short, it’s most likely due to human intervention. Some communities view condors as a bad omen and try to kill them once it gets near them.

Condors are mistreated in Andean festivities

Capturing condors for celebrations is still a common practice in Andean regions, despite being banned by the Ministry of Agriculture. Festivals like Yawar Fiesta involve catching a condor by putting food in a box, then taking it to the town’s bullring where it’s tied to a bull’s back and they fight, rodeo-style. One of the interpretations for this activity is that the bull represents Spanish culture and the condor represents Andean identity overpowering their colonizers. As the condor grows more tense, it begins biting the bull’s ears. Authorities complain that there’s an incorrect treatment to captured condors and that many die soon afterward, therefore banning the use of condors anywhere in Peru.

God’s messenger and other myths

The Incas believed the condor was one of their three totems. This Inca trinity consisted of the puma (Earth), snake (underworld) and condor (sky). Since they fly so high, the Incas thought condors were God’s messengers. A lot has been fantasized about a Condor’s death. It’s said that if one of his neck feathers is removed, the condor will die soon after. Incas thought condors could be immortal, although some Andean mythology explains that condors can end up committing a sort of suicide. It’s said that once condors feel old, without energy and useless in life, they climb to the highest peak and let themselves drop to a certain death.

If you would like to see a condor in the wild, you can visit Arequipa’s Colca Canyon for an almost certain sighting.