7 Musicians You Need to Know From Peru 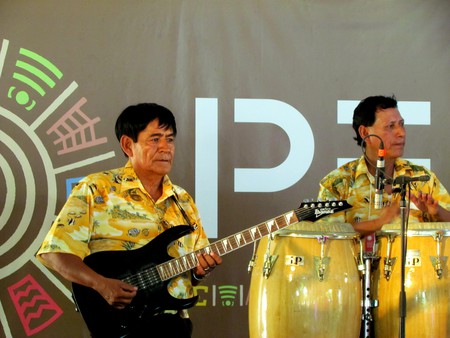 Latin America is home to unique and diverse music that Peruvians have taken and made their own. They took the popular music of cumbia and transformed it, deep within the heart of the Amazon jungle, to create something new but also entirely Peruvian. From new takes on classic genres to music that is completely Peru’s own, check out our guide to the musicians who created the country’s innovative sounds.

Guitarist Salomón Sánchez Saavedra formed Los Wembler’s de Iquitos in 1968 in the Amazonian city of Iquitos, and the band is composed of his five children. Los Wembler’s are the pioneers of Amazonian cumbia, a genre that has influenced musicians from all over Peru. His best-known songs are “Dance of the Tanker,” “A Hissing Love,” “Amazon Sound,” and “Green Threat.” In 1971, they recorded an LP called Cumbia Amazonica, creating a new musical sub-genre of Peruvian cumbia in the process.

Dengue Dengue Dengue, a well-known band from Lima, was influenced by the previously mentioned Los Wembler’s, combining that cumbia feel with an electronic sound. Felipe Salmón and Rafael Pereira are the men behind the music, and the masks, which they started wearing in 2010. They put on an audiovisual experience that involves masks, neon colors, geometrical patterns and allusions to shamanistic tradition. Their name derives from the slang definition of the word “dengue,” which means an urge to party. If you want to go out and get drunk and party, you say I have “dengue,” according to the group. The word also comes from Cuban rhythm, also called “dengue.”

Animal Chuki is another big Peruvian electronic band, with a sound that’s a bit more soft and sensual than Dengue Dengue Dengue. Andrea Campos and Daniel Valle-Riestra, who make up the group, create floating Amazonian sounds. Animal Chuki’s work, which has been captured in EPs such as “Nativa” and “Capicúa” and in a recent album called Frutero, is characterized by the fusion of Peruvian autochthonous rhythms with electronic beats.

From the city of Pucallpa, Peru, an unfrequented town out in the Amazon jungle in the east of the country, Juaneco Y Su Combo was able to ignite a new form of cumbia, the cumbia jungle sound, that was soon beloved by all of Peru. Their innovative music went on to influence the likes of Dengue Dengue Dengue and Animal Chuki.

While Novalima’s sound is futuristic and cutting-edge, their music’s roots reach back to the past. Novalima blends Afro-Peruvian music with electronica and Latin American rhythms. The Latin Grammy-nominated group formed in 2001 and continues to tour. Planetario, their 2015 album, received favorable responses upon its release, with NPR calling it a “three-layer cake of time” and avant-garde in approach.

Anthony Paucarmayta is a composer and music producer from the city of Cusco, Peru. If you combine an Amazonian ayahuasca trip with cumbia, then you’ll come to understand a bit of the sound of Peruvian artist ALQSBS. Listening to the music, it appears to have one foot in the past and one in the future—part homage and part trailblazer.

Zambo, which was his stage name, was an Afro-Peruvian singer and Creole musician. As a result of his distinct voice and prolific professional career, Zambo managed to win the affection and admiration of the Peruvian people. He was recognized in the United States by the Organization of American States (OAS), where he received a tribute for his body of work.