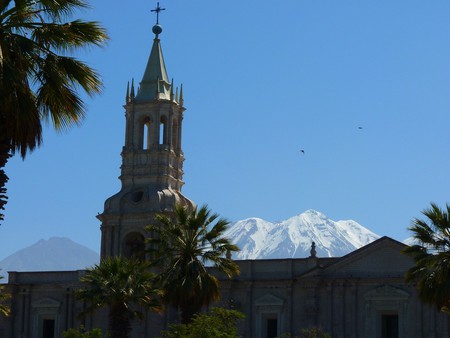 The Plaza de Armas in Arequipa instantly impresses a sense of beauty and wonder on you when you see it for the first time. Its sheer size, the grand pillars, the white buildings and imposing cathedral, together with the imposing background of the volcano Misti, all make it Peru’s best plaza and perhaps the most beautiful in all of Latin America. Here are seven things you need to know about Peru’s famous white plaza.

It’s made from volcanic matter

Arequipa is known as Peru’s white city, and it’s called that because of the all-white Plaza de Armas. The most interesting fact that you should know about it is that the buildings are all white because they’re made out of volcanic sillar. The volcanos that rise behind Arequipa are more than just a beautiful backdrop. They are the city. 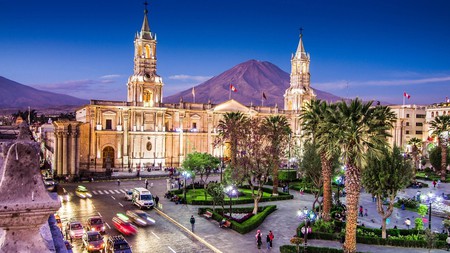 Not too long ago, Arequipa’s plaza was even louder than it is now. Taxis and other cars are prohibited from driving around the plaza now, but until recently they were allowed to drive around it, and the whole area was extremely loud. Cars are banned in order to make the park safer and more enjoyable, but protests are still allowed to take place, and they do!

The two towers of the cathedral rise high above the plaza, and are only rivaled in size by the giant volcano that looms off in the distance. Arequipa’s cathedral is massive and takes up an entire side of the Plaza de Armas, making it the undisputed largest cathedral in Peru. 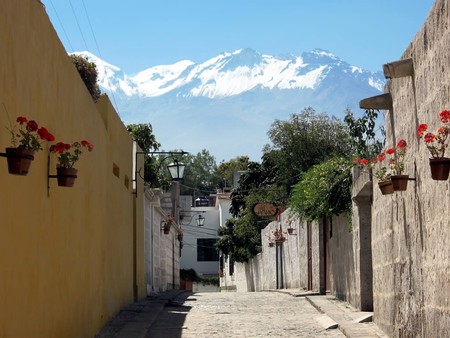 It has survived earthquakes

There have been two especially damaging earthquakes that destroyed the cathedral, and a fire that caused considerable damage to its interior, but you may not notice any of that when you look at the massive structure. Arequipa has suffered many large earthquakes and frequent seismic activity that has destroyed parts of everything in the city.

You can drink hot chocolate and chill

This is the place where everyone goes to hang out: long-time couples, first-time dates, large families – the plaza is where you’ll find everyone coming to gather together. It is a space for the people of the city, and they use it to its fullest. It’s traditional to drink hot chocolate in the Plaza, especially during Christmas season. You’ll never find a day when there aren’t kids running around the Plaza as their elders sit and watch from a bench.

The largest organ in South America

As the story goes, Belgium shipped Peru an organ, but not just any old organ: it was, and is, the largest organ in all of South America. It found a home in Arequipa’s cathedral, and that is where it is still located today. Unfortunately, during the shipping process there was an accident and the organ was slightly damaged. 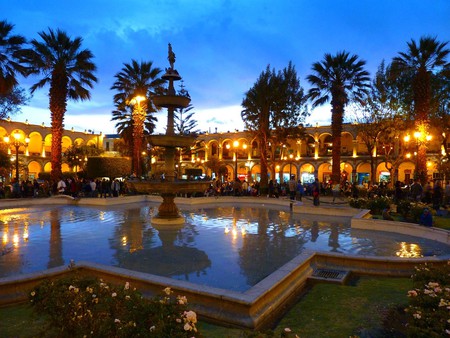 Like Machu Picchu and many other culturally significant landmarks in Peru, Arequipa’s Plaza de Armas has been designated a UNESCO World Heritage Site for its beauty and cultural value, which are immediately apparent from the first step you take into the Plaza.