Asuncion will take the gourmand traveler on an unforgettable tour of fine dining, native Paraguayan cuisine and dazzling spices. While barbecued meat, known in Spanish as asado, is definitely a favorite on the national menu, freshly squeezed juices, crunchy vegetables and succulent meats are bound to delight as well. Here are 10 of the best cultural restaurants in the Paraguayan capital. 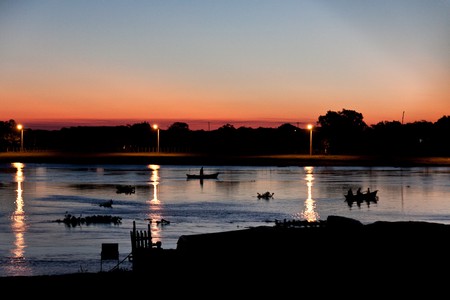 Sunset Over the River Paraguay | © Arcadiuš/Flickr 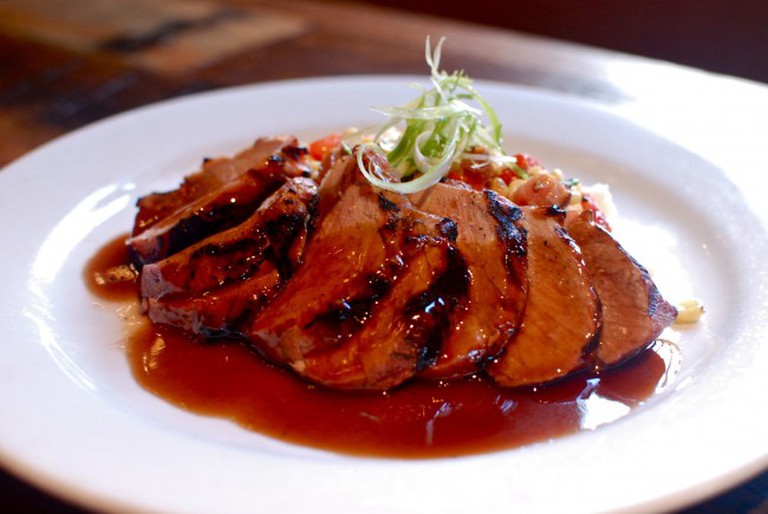 Pork Tenderloin is One such Dish on the Menu | © simmsrestaurants/Flickr
Founded in 1976, the Talleyrand was the first architectural complex in Asunción built specifically to house a restaurant. The addition of private lounges to the premises was also an unprecedented idea at the time, which underlines Talleyrand’s innovative character. For those familiar with French history, the restaurant’s name may ring a bell as the establishment was named after Charles-Maurice de Talleyrand-Périgord, a French diplomat who played a key role during the French Revolution. Mainly offering French bistro cuisine, the restaurant also serves up Mediterranean dishes and succulent meats, such as pork tenderloin with apple chutney, honey and ginger, or Café Paris tournedos prepared with almonds and 14 herbs. With its colonial-style decor, low beams and tapestry chairs, Talleyrand is a piece of historic heritage served with a modern French twist.

Located in a pleasant neighborhood, the Mburicao Restaurante has been delighting its customers since 1995. It is a place where French and Italian cuisines meet Paraguayan flavors, smells and textures. Innovative dishes such as chicken with lemonade risotto or the lamb payagua bring out the nuances of South American ingredients in sophisticated arrangements. In the warm and comfortable atmosphere of the airy dining room, wood and soft Mediterranean colors are predominant. While the food and atmosphere are certainly inviting, Mburicao gains extra points for its collection of Koki Ruiz’s paintings, which adorn the walls with splashes of color, energy and emotion.

Originally located in an old colonial house, the El Dorado restaurant recently moved near the Paeso Carmelitas shopping center. With a number of reviews in glossy magazines, this restaurant has garnered praise for its international fusion menu and generous wine cellar. The chef’s suggestions, including the pheasant with port sauce or surubi fish served with Roquefort, appear in audacious and sophisticated compositions, which surprise and delight the palate. With its contemporary décor, modern art on the walls, and exciting atmosphere, El Dorado is one of the most elegant and raved about dining venues in Asuncion.

Opened in 1900 in the heart of Asunción, Restaurante Bar San Roque is the oldest restaurant in the country, and famed for the quality of its food, excellent service and reasonable prices. The long wood-paneled counter bar and olive green walls create a cozy ambiance to match the restaurant’s reputation as a welcoming, family run dining spot. Very popular with locals and tourists, Restaurante Bar San Roque’s menu features traditional meat based dishes, such as the puchero (boiled beef), in generous portions. Additionally, fried yucca root, a common Paraguayan vegetable, is likely to be served with any chosen dish in one form or another. Somewhat surprisingly, the restaurant’s owners take great pride in their collection of Oktoberfest steins, which goes well with the impressive selection of German beers. 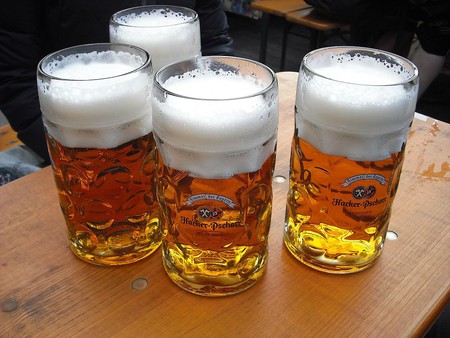 The Taberna Española (Spanish Tavern) first opened its doors in 1985, and has been gaining visitors and popularity ever since. Paella is definitely the specialty of the house, with eight varieties on offer and an annual giant paella event which feeds 800 people during a telethon charity project. The Taberna’s characteristic décor welcomes visitors with empty bottles and seashell mobiles dangling from the ceiling, while the walls are covered with proverbs from around the world and quotations by famous people, from Benjamin Franklin to Molière. Its homely, warm feel makes the Taberna a premier Spanish cuisine destination in the Paraguayan capital. 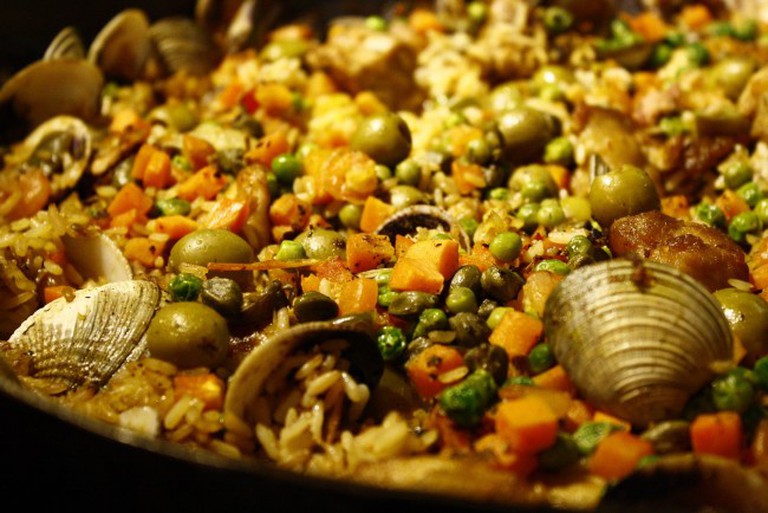 Bar, Restaurant, South American, Contemporary, $$$
Facebook
Email
Twitter
Pinterest
Copy link
Share
Chef Rodolfo Angenscheidt launched Tierra Colorada restaurant in 2010 with the aim of offering his customers a unique gastronomic experience coupled with the best products from across Paraguay. The restaurant offers a fresh, modern cuisine, a blend of European and South American influence, peppered with native ingredients such as mouthwatering cassava. In accordance with the restaurant’s mission, the menu varies according to the seasons, offering products that are available at farmers’ markets. With its large windows, luscious plants and wooden furniture, Tierra Colorada’s peaceful ambiance sets the perfect backdrop to a warm Paraguayan evening.

El Café Literario (Literary Café), located in the historical center of Asunción, acts as the meeting place for literature lovers who want to discuss or read a good book while enjoying a drink or snack. The cozy café is especially praised for its delicious, freshly squeezed fruit juices and pastries. With a calm and quirky atmosphere, rustic furniture and old-fashioned film posters, El Café Literario provides a welcome shelter from the hustle and bustle of Asuncion’s streets. The walls are lined with books by a wide range of Paraguayan and foreign authors, whose publications are available to read on the spot. Moreover, lucky visitors might get the chance to glimpse an exhibition upstairs as local artists sometimes display their work in the café. 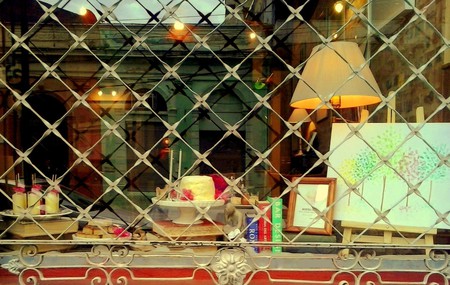 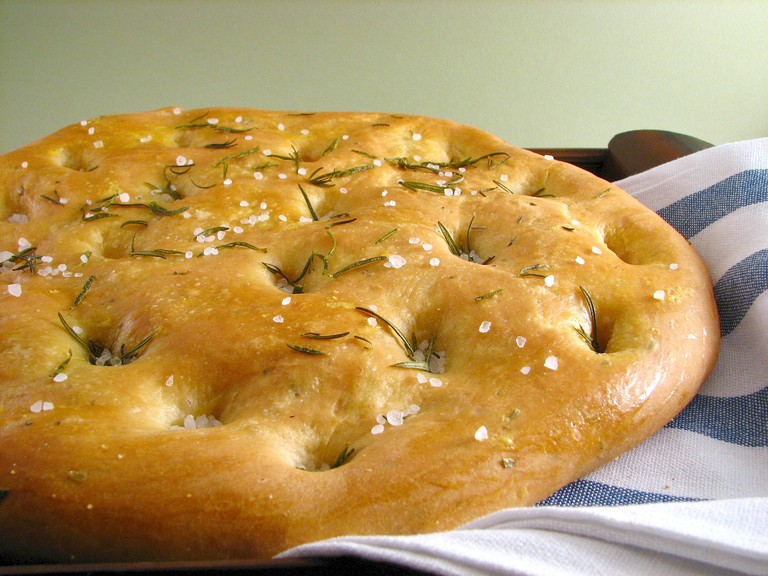 Focaccia on the Menu at Bolsi | © Parkerman & Christie/WikiCommons
Well located in central Asunción, El Bolsi restaurant was established in 1960 in a late 19th century house classified as a historic site. Featured in various magazines, Bolsi invariably ranks among the top ten restaurants in Asunción despite its basic, even bare appearance and simple fare. The specialty of the house has to be the surubi fish with parsley and coconut milk, served in a ceramic dish. A trusted cheap eat in the city, El Bolsi has seen generation after generation of faithful customers come in and, according to popular opinion, has always provided its customers with delicious food.

The Luna Vinera is nestled in an old, wood-decorated house, and offers both traditional Paraguayan and international fare. The Luna Vinera is famous for its original menu, which boasts innovative coconut milk and ginger based dishes, as well as regional specialties such as the ceviche, a marinade of seafood popular in South America. The lights, the jazz and the colors give this spot a laid back feel with an intimate, romantic twist. On balmy moonlit nights, guests can enjoy their meal in the inner courtyard, where luxuriant plants and candles are abundant. 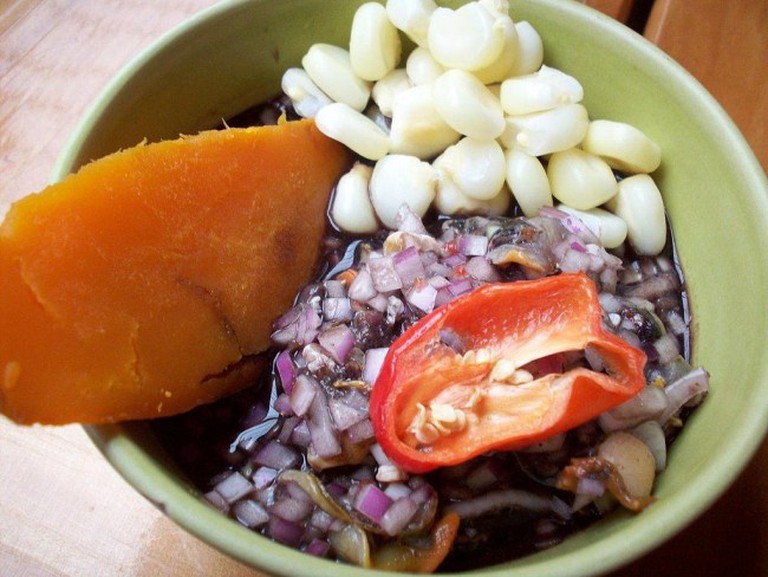 Restaurant, South American, $$$
Facebook
Email
Twitter
Pinterest
Copy link
Share
The Ciervo Blanco (the White Deer) combines excellent food with great folklore music and dance shows, making it a one of a kind spot in Paraguay. Renowned for its shows in the semi-open, Ciervo Blanco has welcomed many artists from the national and international scene. One of their most famous shows is the so called ‘bottle dance’, where female dancers balance a bottle on their heads in a gasp-worthy performance. While these spectacles are bound to capture the patrons’ attention, on offer are equally dazzling grilled meats and fish served in a traditional Paraguayan setting. Thanks to its typical ambiance, the Ciervo Blanco is an unparalleled opportunity to encounter and explore Paraguayan culture.
https://www.instagram.com/p/BV250fVBIw4/?taken-by=ciervoblanco_py
Give us feedback