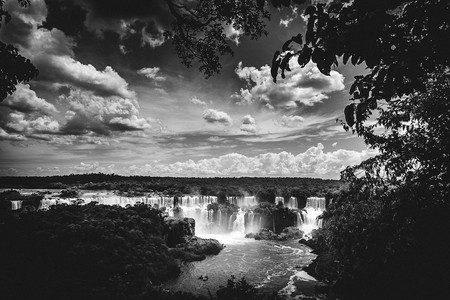 Most visitors to Iguazú Falls head there from either the Brazilian side, with its sweeping vistas, or from the Argentine side, which is tangled with winding pathways through the dense jungle. For the curious, there’s a third approach – from Paraguay. Here’s Culture Trip’s guide to the ultimate tour of the Falls from this lesser-known land.

The nearest bolt-hole to the Falls in Paraguay is chaotic Ciudad del Este, affectionately known as ‘the Supermarket of South America’. Cheap and cheerful, it throngs with speeding yellow cabs, grouchy bikers and neighbouring Brazilians and Argentinians on the hunt for knock-off goods. A far cry from the tourist traps closer to the Falls, it has its own benefits: tax-free shopping, plenty of authentic Chinese restaurants and the novelty of slot machines in the streets. There are two central hostels, Teko Arte Hostel & Bar and Hostal Hummingbird, with dorm rooms starting from a pocket-friendly US$8. If you’re after a little more luxury, a two-night stay at one of the city’s decent hotels won’t set you back more than about US$150. 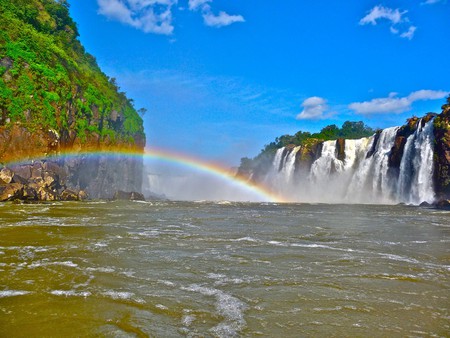 The journey to the Falls from the bustling city is a breeze. From Ciudad del Este Terminal on the outskirts, take the bus to Puerto Iguazú – it’ll cross the notorious Friendship Bridge, stop at immigration and drop you off at the ‘gateway’ nearest the Falls. From there, take the cheap shuttle bus the rest of the way. Alternatively, hop on a bus from Avenida General Bernardino Caballero labelled Tres Fronteras and request to disembark at la balsa (the ferry) to take a boat across to Argentina, avoiding Brazil entirely. On this side, there’s a pretty open-top Jungle Train that winds through the park, spotting butterflies and native coatí en route. 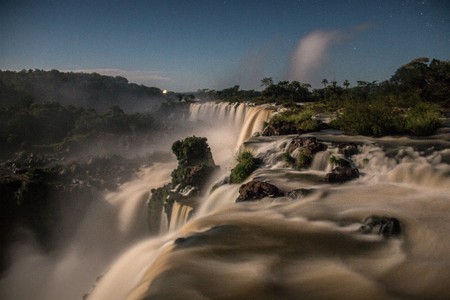 Which side to pick

Most travellers (particularly Americans) will have to pay a visa charge or reciprocity fee to enter Paraguay, Brazil and Argentina, so it’s worth checking on your government website in advance. The process to get your hands on a Brazilian visa can be long-winded if you’re only stepping in to see the Falls, whereas Argentina did away with its reciprocity fees for US citizens in late 2016. Strap on your walking boots, waterproof your camera and plan to see things from the (arguably more spectacular) Argentine point of view. 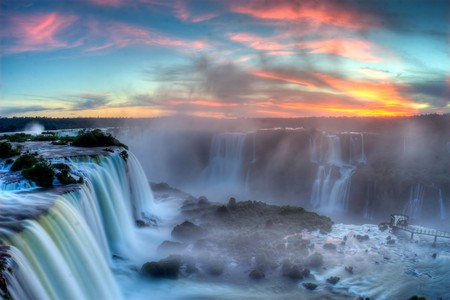 Iguazú Falls are among the most majestic natural wonders on Earth – four times as wide as Niagara, the sight alone is enough to captivate you for an hour or more. From the Argentine side, you’ll find yourself within arm’s reach of some of the waterfalls, so be sure to take waterproofs or swimwear if it’s the height of summer.

From the entrance, head up the Sendero Verde pathway on foot to the lower circuit’s viewpoints of the Dos Hermanos and Tres Mosqueteros falls. Steady your legs for the staircase behind Salto Bossetti and take the ferry across to the relaxing San Martin Island for a spot of sunbathing.

If you’re brave enough, catch the train over and venture to the edge of the viewing platform (the Paseo Garganta del Diablo) to get a bird’s eye view of the rumbling Devil’s Throat, or get soaked on a Gran Aventura boat tour from the base. Pick up trail maps from the Visitors Centre and spend the afternoon wandering through the breathtaking Iguazú National Park, along wild pathways that dip in and out of the cascades. Look out for toucans and capuchin monkeys in the trees. Before sunset, stroll along the upper circuit among tropical flora and fauna to catch a glimpse of rainbows as the last of the day’s sun hits the tumbling falls.