The Most Beautiful Towns in Paraguay

Paraguay’s history stretches back hundreds of years, which means oodles of cultural treats are in store for the traveler. One example is the nation’s beautiful towns – the best of which are showcased here. 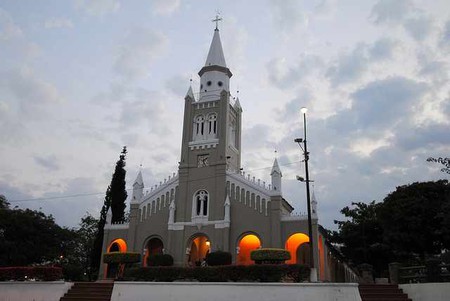 Those looking for the soul of Paraguay cannot miss Areguá. This enchanting city draws its charm from its unique topography formed by the continuous series of mountain ranges on the one side and the mesmerizing ripples of the Ypacaraí Lake on the other. A confluence of history and culture amid beautiful natural scenery makes it an unforgettable destination. The city, known for its cobblestone streets, incredible density of Spanish colonial architecture, delicious strawberries, and ghosts(!) offers a quiet destination for those who seek tranquility in peaceful surroundings while delving into culture. In August, Areguá celebrates the annual Strawberry Festival, marking the start of the marmalade-making season. 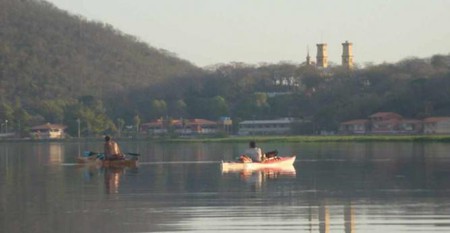 If you’ve ever wondered what forgotten paradise looks like then Fuerte Olimpo is one of the Paraguay’s must-sees for sure! Lying across the Paraguay River, in between three hills, the city is both a town and a port, and the only way to reach it is via boat. Perhaps, it should be called the “Venice of the South”, for the city stretches along the shoreline near the mouth of Blanco River and has its own enchanting lagoon. Just like the medieval city-fortress, Fuerte Olimpo is surrounded by a high wall that gives it a special charm. There is a perfectly simple way to admire the town’s scenic beauty: from one of the three hills, which can be climbed and sit dotted with cathedrals and interesting spots aplenty. 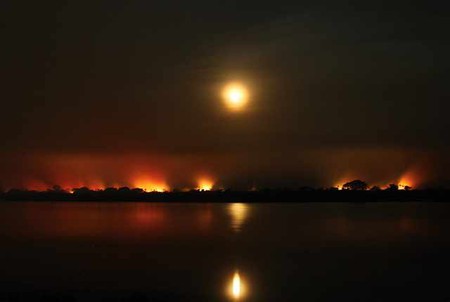 Bahia Negra is a small town at the very end of the world. Built as a military base to protect the coastline of the Paraguay River, the city has no more than 800 residents today. But the first impression can be sometimes misleading; Bahia Negra is the only entry port for those who want to visit the Paraguayan sector of the Panantal – a natural area, enclosing within its vast territory the world’s largest tropical wetland area. Only 40 kilometers from the centre of Bahia Negra, one will find the Los Tres Gigantes Biological Station. This research institute, accessible only by boat, administers a staggering number of natural land: 15.000 hectares. 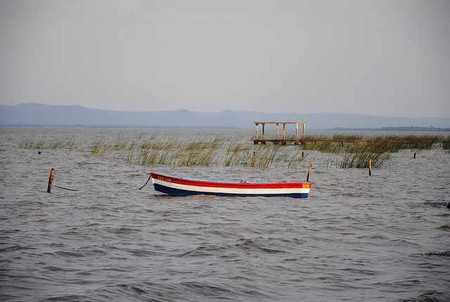 Ipacaraí means “sacred water” and there is certainly something mystical in its peaceful waters, promising havens for those who sail in silent nights under the stars. Ecotourism centered around the vast natural areas of Ipacaraí is presently one of the fastest growing sectors in Paraguay. The city attracts visitors mainly for to its nature-based experiences and recreational activities: diving, fishing and boat trips. For travellers who prefer to get in touch with culture, the annual Lake Festival held on 24th May is the place to be. This is a perfect time to enjoy long hours of Paraguayan folk music, joyful dancing, and relaxation under the shades of the trees. 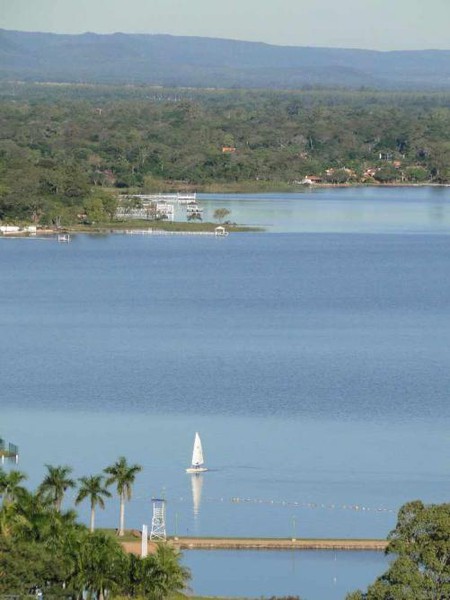 San Bernardino, or “San Ber” as its known to locals, is not so much a city as a state of mind that influences the way people think and feel. Located on the picturesque coastline of Ipacaraí Lake, travellers here plunge into San Ber’s relaxing atmosphere and buzzing cultural offering. It is recommended to indulge the senses with delicious food and fizzy drinks and simply savour the laid-back vibes and hedonsitc energy of the place. So, come and discover the best of Paraguay’s nightlife: buzzing restaurants, beach front pubs and lively clubs with infectious beats.

Villarrica has some of the most impressive architecture in Paraguay, a reflection of the significance of the town as a regional center of Guairá district. It is a perfect destination for those interested in history, culture, arts and academic activity. Some historians nicknamed Villarrica as “the wandering city” because its location had been changed several times throughout its existence, mostly due to the invasions of the Paulist Bandeirantes who sacked it in search of gold and silver. The city is now a prominent academic center, complete with three universities and a number of schools of higher education. 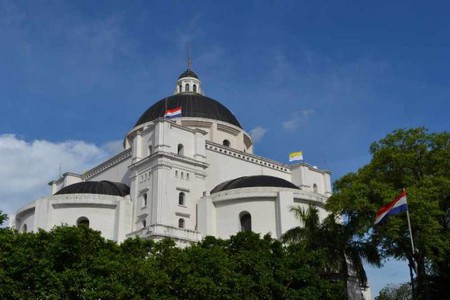 57 kilometers to the east of Asuncion stands the small city of Caacupé, home of Paraguay’s most important pilgrimage site. Tradition dates this site to the early 16th century, when a Guarani Indian peasant named Indio Jose, patronized by Franciscan missionaries, carved an image of the Virgin Mary for the new church and subsequently received a visitation from her accompanied by a pillar of light. The sculpture, now housed inside the Basilica of Virgin Mary of Caacupé is an object of pious devotion for thousands of Paraguayans. The city holds its annual religious festival on 8th December and is a grand and sacred place, great for those who wish to get attuned with the country’s religious fervor. 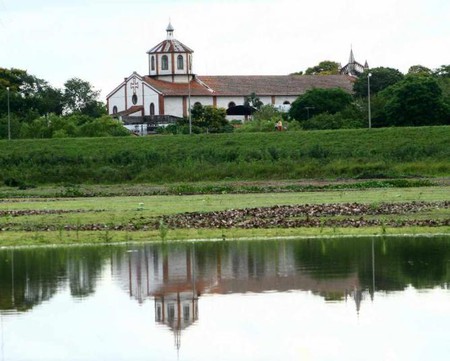 Basilica of Our Lady of Pilar | © FFMM/WikiCommons

Pilar is one of Paraguay’s most adorable cities, outstanding for its combination of magnificent architecture and vast areas of greenery. It lies on the banks of the Paraguay River near the wetlands of Ñeembucú. With many intertwining streams, humming rivers, walking paths and picture-perfect beaches, Pilar offers a unique fusion of culture and outdoor entertainment. Its dozens of beaches are some of the best in all Paraguay and travelers delight basking in the crisp waters of the Paraguay river. The city’s famous fishing tournament attracts participants and spectators from all over the world too, while Pilar’s most famous celebration, Fiesta Hawaiana (held on 2nd January), storms through the Ñeembucú area with an endless variety of regional sounds. 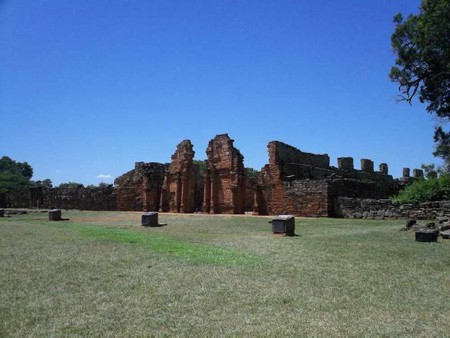 San Ignacio is Paraguay’s cultural treasure. Amid the echoes of ancient warfare begins a story about Jesuit missionaries who established the city in 1610 with the name of San Ignacio. Anyone who’s seen the movie “Mission” knows what happened there. It was the first Jesuit reduction set in the area and the base of further Jesuit reductions established in the south. At present, San Ignacio is considered to be the capital of the Hispanic-Guarani Baroque and rightly so, because, entangled in the net of intertwined cultures here, the city is stepped in history that carries with itself a certain sadness and melancholy. The ruins of the restored Jesuit Mission offer an unforgettable experience for those who draw inspiration and interest from the past.

Yes, Itá is beautiful and its natural setting is appealing, but the biggest attraction here is the locals, whose friendly hospitality welcomes all. Itá is inhabited mostly by indigenous Guaraní people, submerged in old customs and traditions. Itá is as real as it gets in Paraguay: the city is known as the capital of ceramics and handicrafts and residents are also passionately engaged in the creation of beautiful dolls. There are many wondrous things in Itá, but two are exceptional: stunning lagoon Itá and the mysterious cave, Cerro Arrúa’i.