Mia Castagnino Spoke to Us about Paraguayan Literature, Expatriatism, and Cinematic Prose 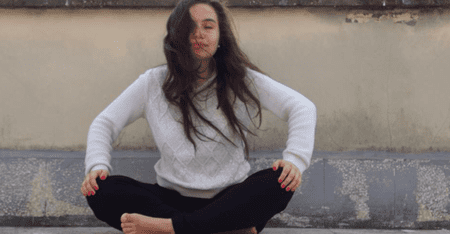 The Paraguayan writer included in our Global Anthology talks to us about winning a PEN literary award, why translated Paraguayan literature remains rare, and how her work has benefited from living abroad.

In 2010, the writer Lily Tuck established a $100,000 grant to be awarded by the literary institute PEN to assist with the translation of Paraguayan literature. Tuck had previously won the 2004 National Book Award for Fiction for The News from Paraguay, a historical novel concerning Eliza Lynch, a Irish woman and de facto wife of the controversial 19th-century Paraguayan Francisco Solano López. The PEN prize Tuck established addressed what is apparent to anyone curious about Paraguayan literature—the paltry amount of works from that country to be translated. As an award, the grant offered a unique opportunity—both a writer and a translator would be given a monetary reward of $3,000 each.

The poet and prose writer Nathalia María Echauri Castagnino, who writes as “Mia Castagnino,” won the award in 2016 for her her poetry collection Doce Lunas Llenas: Poesias sobre la Divina Energia Femenina (Twelve Full Moons: Poems on Divine Feminine Energy). Though no translator has yet become attached to the project, the award brought Castagnino a modicum of literary attention outside of her native country, where self-publishing is a reality for even its most accomplished writers.

Castagnino’s short story “Mamá Muerta,” was translated and published by Culture Trip as “Dead Mother” and is an exclusive addition to our Global Anthology. “Dead Mother” concerns a young woman who documents the real-time moments of discovering her mother’s untimely death. Written in a distinct dual narrative style, Castagnino demonstrates a literary prowess for voice that is all her own. Now based in Europe, Castagnino is developing new work based on her experiences abroad, while keeping tuned in to what’s going on back home.

We spoke with the Castagnino about winning a PEN award, her hope for expanded interests in Paraguayan literature, and how her work has benefitted from living abroad.

“Mamá Muerta” (Dead Mother) is written in a real-time duel-narrative, where the narrator is observing reality and then slightly altering her observations as she records them in her notebook. It’s a style that draws out the emotional duress that the narrator is in. How did you come to write the story in this way?
My motto is to write what I want to read. Details are especially important to me, and I labor over the precision of describing them. Observing the minutiae of what a character is doing and seeing is an amazing aesthetic exercise for narrators, whether they be writers, or audiovisual students and filmmakers. As a lover and student of film, this mix of artistic disciplines has become a lasting influence on my work.

You were among the winners of the 2016 PEN/Edward and Lily Tuck Prize for Paraguayan Literature. Could you talk about winning this prize? Are you currently using the award to work with a translator? If so, on what projects?
It was a beautiful surprise; I didn’t expect it at all. But it was given me for a collection called Doce Lunas Llenas: Poesias sobre la Divina Energia Femenina (Twelve Full Moons: Poems on Divine Feminine Energy). It’s an anthemic work that explores what it is to be a woman. I have yet to find a translator for this collection, but it would be really nice to see it appear in English. I am still so glad for the prize, though, it’s such an honor. I am currently working on another collection of short stories, which is my favorite literary genre. 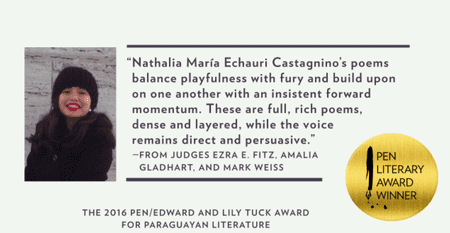 Paraguayan literature is not as widely translated into English as some of its neighboring Latin American countries. Why do you think this is?
Maybe because Paraguay’s greatest literature was written during the dictatorship of Alfredo Stroessner, when being an artist was difficult and risky. Most of the Paraguayan intellectuals had to leave the country, including our most famous writer and (Cervantes prize winner) Augusto Roa Bastos. Or maybe it’s because the Paraguayan market for literature is so small. Writers have to pay out of pocket for their books to be published, and even these rarely make it outside of the country. But recently, the Sociedad de Escritores del Paraguay has been working really hard to introduce and showcase the country’s writers to the rest of Latin America. I think in the next few years we will see more international interest in Paraguayan literature.

Could you talk a bit about your generation of Paraguayan writers? What are their concerns? Whose work are you excited about these days?
There is a lot of great writing coming out of Paraguay right now—essays, short stories, great poetry, novels—with some writers like myself being awarded this PEN Paraguayan literary prize. Comic editions of famous works of classic Paraguayan writers have also become quite popular. My favorite Paraguayan writer is Augusto Roa Bastos, but he passed away years ago. Another fantastic writer (that has passed away also) is Raquel Saguier, she had a lovely style and was quite prolific.

You now live abroad in Europe. I’m curious how living outside of Paraguay has affected or influenced your work? What are you currently working on?
Living abroad has been an important developmental step for me as a writer. Being out of your comfort zone allows for new opportunities and adventures. You’re constantly living out your own stories, and you’re constantly meeting new people (only if you want to, of course) and all of this can be great sources of inspiration, especially if you are young. I try to travel as much as I can, and my travels right now are my principal source of inspiration for my stories. A writer that I really admire, Vladimir Nabokov, lived most of his life abroad, and you can feel that that was fundamental to his work. Observing the lives and words of people in cities from all over the world has been similarly essential for my own work.