In 1982, Linda Kitson was commissioned by the Imperial War Museum to be the official war artist for the Falkland’s Conflict. She became the first female artist to accompany troops to the front line and made hundreds of drawings in conté crayon recording the training and daily life of the soldiers out there. 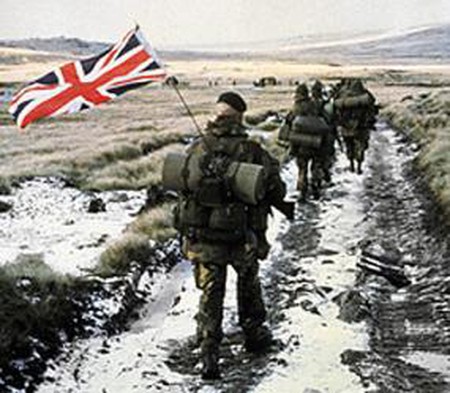 Kitson left Southampton for South Georgia in May along with 3000 men on the famously-requisitioned cruise liner the QE2. Renowned for her speed, she began sketching immediately and recorded numerous scenes of this unusual journey, including helicopters taking off and landing on the temporary pads constructed over the ship’s swimming pools. The final leg from South Georgia to the Falklands was made onboard the SS Canberra.

Once they had disembarked, she followed a day or two behind the fighting, rapidly sketching as much as she could of their advance across the land. Battling against freezing temperatures and gale-force winds her work focused on life at the camp and the daily conditions faced by the soldiers, rather than the horrors of wars. In The Falklands War: A Visual Diary she states:

“At Goose Green, I had to make a decision about what aspects of war I should record. My brief was to record the sights that might be recognised as common experiences. I decided that the horrifying sight of parts of human bodies, a helmet with a head still in it – pictorially sensational and relevant though they were – were not part of my brief; neither were the war graves, which were recorded on news films and in photographs. I still question that decision. Would it have been a stronger, cautionary record if I had used such shock tactics?”

Kitson was one of a small number of artists commemorated in the exhibition Women War Artists at the Imperial War Museum in 2011. As the 30 year anniversary of the Falkland Islands Conflict approaches – and fresh controversy over their sovereignty emerges once again – her work provides a unique perspective on the events of 1982.