Where to Find Ecuador’s Hummingbirds 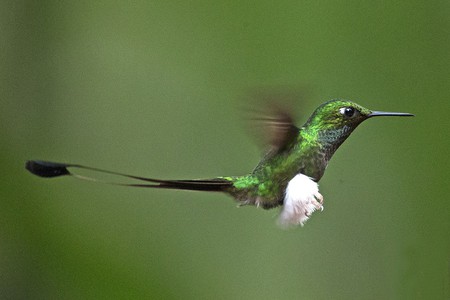 Ecuador is home to 152 species of hummingbirds, an incredible fact considering that this small country is about the size of the state of Nevada. While hummingbirds can be seen anywhere except on the Galapagos Islands, certain locations have been attracting hummingbirds to feeders and specially designed gardens for years. Here are a few that lie one to five hours by car from Quito.

Along the spine of the northern Sierra, there are several places to see hummingbirds but only a few make it easy to do so. The best have small hummingbird gardens to attract the birds to a single location, increasing your odds of seeing the most species in a single visit.

The lodge of San Jorge de Quito is located on the outskirts of the capital city along the old road to Mindo. The property was once a working hacienda, with historic buildings, a bullfighting ring, and beautifully manicured gardens. Today, hummingbirds flock to both the flowering plants and the sugar feeders placed on the lodge grounds. Commonly spotted hummingbirds are the Sword-Billed Hummingbird, the Tyrian Metaltail, the Sparkling Violetear, and the Shining Sunbeam. 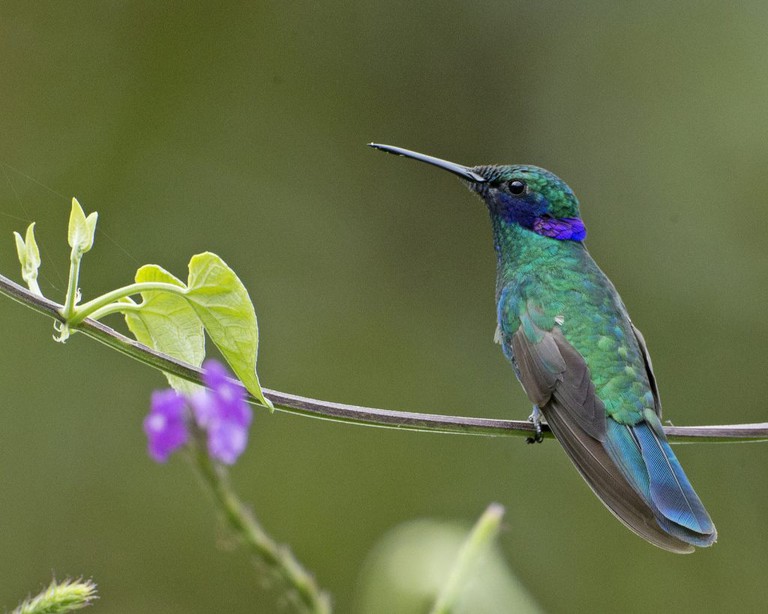 On the west side of the Pichincha Volcano, the Jocotoco Foundation runs a small nature reserve called Yanacocha. They have miles of hiking trails through primary cloud forest and, on clear days, excellent views towards the Pacific coast and San Miguel de los Bancos. About an hour hike from the main parking lot lies a small hummingbird garden which regularly attracts the Sapphire-vented Puffleg, the Golden-breasted Puffleg, the Great Sapphirewing, the Buff-winged Starfrontlet, and the Sword-billed Hummingbird. 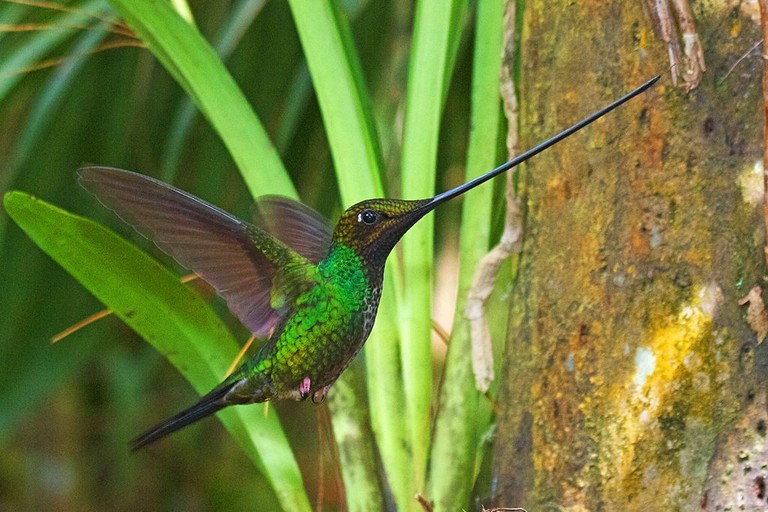 On the backroads driving past Pintag to Lago Mica you’ll find a small nature reserve operated by the Jocotoco Foundation called the Reserva Antisanilla. Their overlook on the side of the road is intended to maximize opportunities to see Andean Condors; but hummingbirds are attracted to the native vegetation just below the wooden walkway. Commonly spotted hummingbirds are the Sparkling Violetear, the Giant Hummingbird, and the Black-tailed Trainbearer. 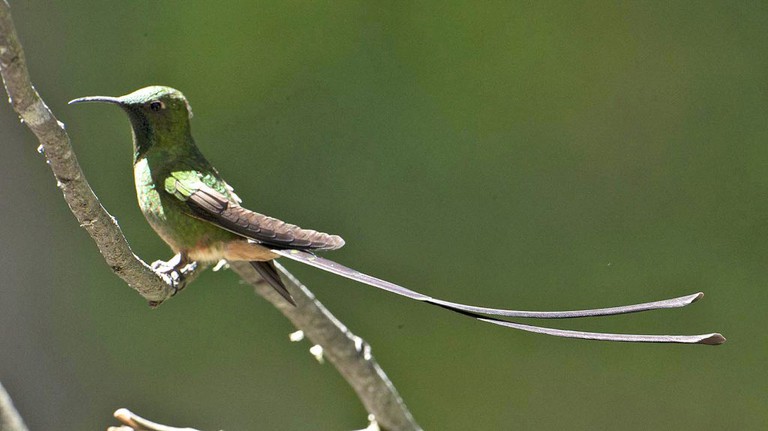 The West Slope of the Andes

There are mountainsides full of primary cloud forest on the Pacific Coast side of the Andes. Driving from Quito towards the Pacific Coast you will find each of these locations in turn. Several of the species listed can be seen at all three and no list is meant to be definitive.

The valley of Tandayapa is a bird watching paradise. But it isn’t just for visitors carrying binoculars. Several lodges in the area, including the Bellavista Lodge, San Jorge de Tandayapa Eco-lodge, and the Tandayapa Lodge, all have feeders to attract a wide variety of hummingbirds. Most offer a day-use fee if you prefer to make a day trip from Quito. Often spotted are the Booted Rackettail Hummingbird, the Violet-tailed Sylph, the White-bellied Woodstar, the Fawn Breasted Brilliant, and all three species of Violet-ears. 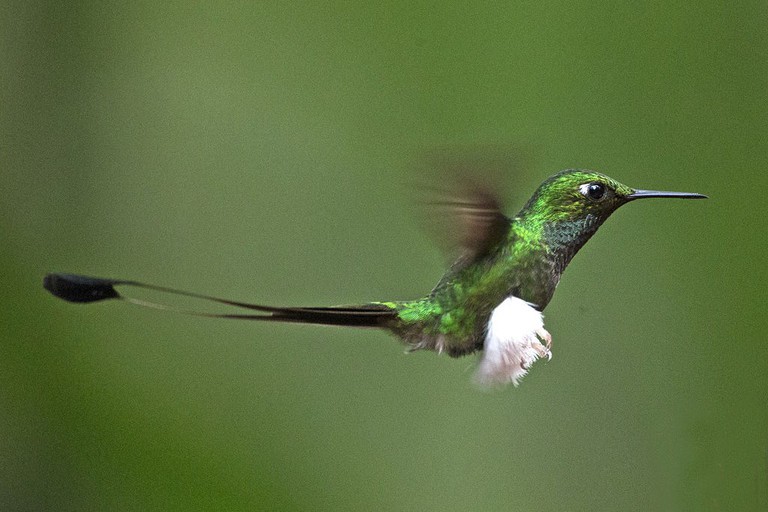 Mindo is famous for birdwatching and tourism has grown alongside its fame. Several small cafes and restaurants, as well as lodges and guesthouses, have feeders to attract the myriad of hummingbirds in the region. A small lodge outside of Mindo, the Angel Paz Reserve, is worth a visit all its own. Hummingbirds you would likely see on a trip to Mindo include the Emerald Brilliant, the Booted Rackettail, the White Whiskered Hermit, the White-necked Jacobin, the Velvet-purple Coronet, and the Collared Inca. 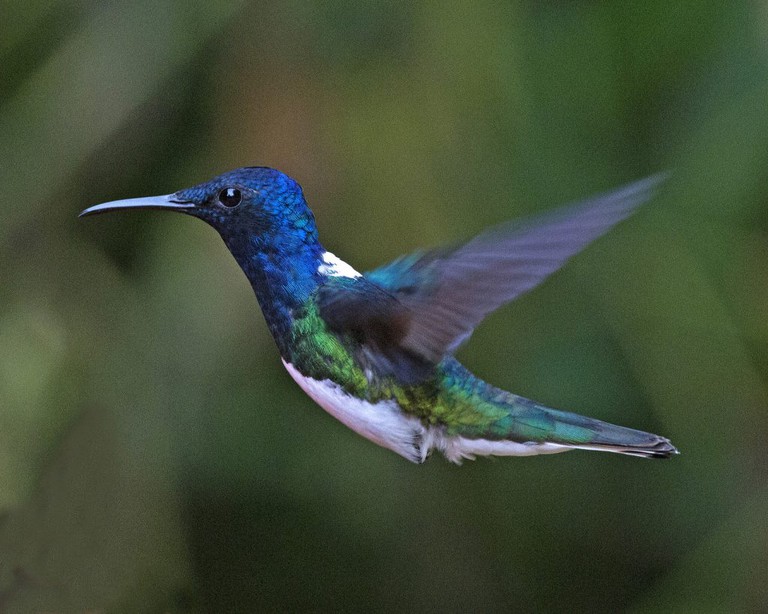 The small town of San Jose de Milpe is barely a town at all. But it is home to several birding lodges, including San Jorge de Milpe Eco-Lodge, and a hidden treasure, the Mindo Cloud Forest Foundation. The climate here is warmer and the forest is subtropical, humid, and very different from the higher elevation cloud forests of Tandayapa and Mindo. A great place to spot the Green Thorntail, the Andean Emerald, the Purple-bibbed Whitetip, the Green-crowned Woodnymph and Rufous-tailed Hummingbird. 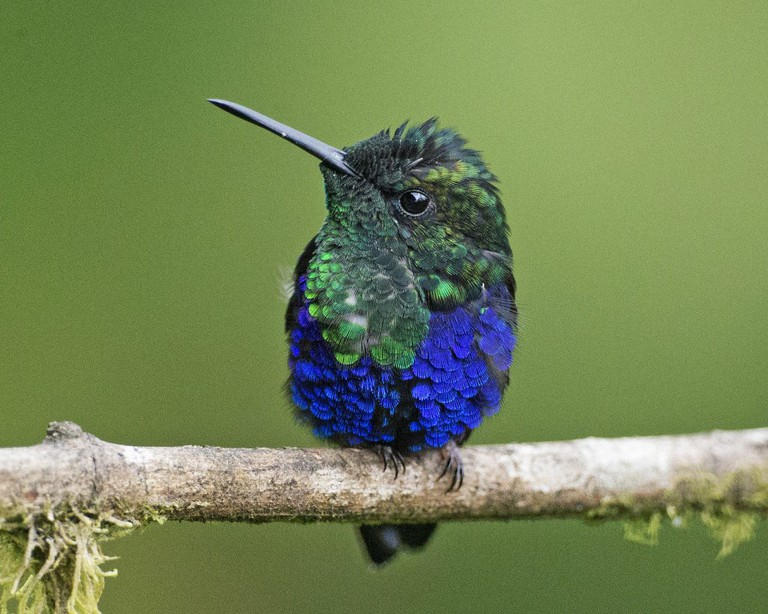 East Slope of the Ecuadorian Andes

The primary cloud forests on the eastern side of the Andes eventually end in the subtropical jungles of the Amazon Basin. Driving from Quito past Papallacta into the Napo Province, you will find each of these locations in turn.

Papallacta is famous for hot springs but warm water also attracts hummingbirds. While sitting in a pool of bubbling water, keep an eye on the nearby flowering plants and you just might see a Sword-billed Hummingbird, a Shining Sunbeam, or a Sparkling Violet-ear. Visit the small Guango Lodge just a short distance further along the highway if you want to guarantee hummingbirds. Their small garden is a magnet to several cloud forest species like the Glowing Puffleg Hummingbird. 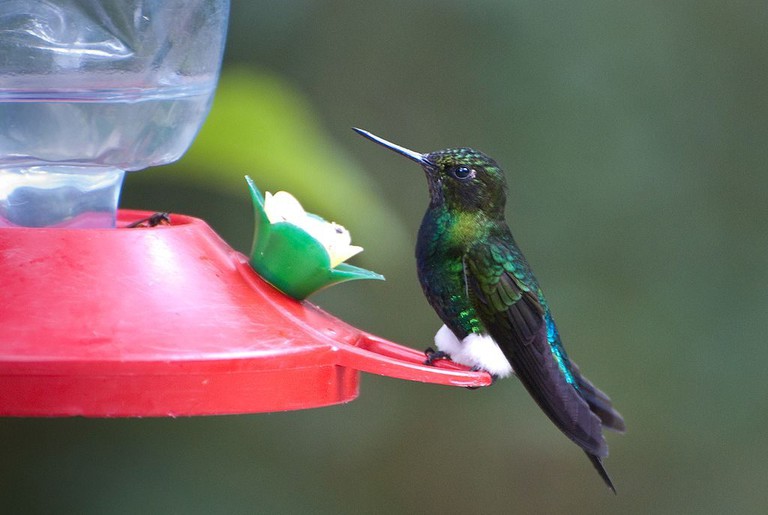 The town of Cosanga is popular with bird watchers but has not become as famous as Mindo. It is more difficult to find locations with feeders but both Cabañas San Isidro and the Yanayacu Biological Station a little further down the back road are excellent places to view hummingbirds. Common species to see include the Long-tailed Sylph, the Chestnut-breasted Coronet, the Collared-Inca, the Bronzy Inca, and the Fawn-breasted Brilliant. 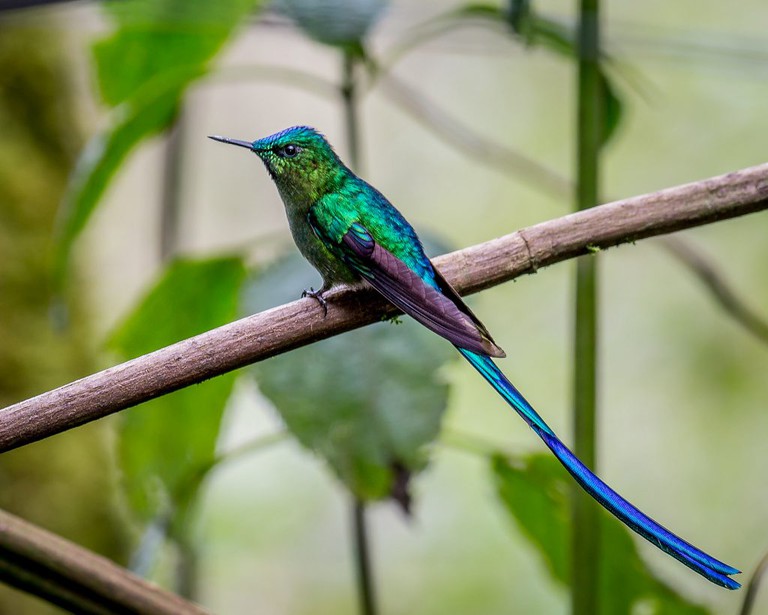 The Wildsumaco Lodge is the only birdwatching lodge in the region of Pacto Sumaco. They are a non-profit enterprise working with the community to improve employment and protect the endangered habitat. The lodge has several hummingbird viewing points where you can see the Wire-crested Thorntail Hummingbird, the Booted-Racketail, the Many-spotted Hummingbird, the Violet-headed Hummingbird, and the Golden-tailed Sapphire. 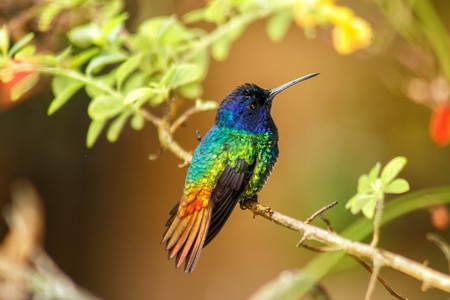