The Top Things to Do on San Cristóbal Island, in the Galápagos 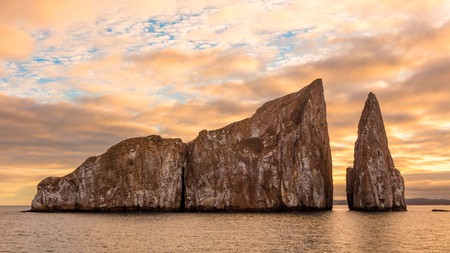 San Cristóbal Island, home to around 6,000 people, is the second most populated of the Galápagos Islands and the easternmost island in the archipelago – around 965km (600mi) off the coast of mainland Ecuador. It’s where Charles Darwin arrived in September 1935, providing the initial foundation for his theory of evolution.

Discover the very best of the Galapagos on Culture Trip’s exclusive five-day adventure. Led by our Local Insider, you’ll explore the many natural wonders of the islands with a small group of culturally curious travelers.

Characterized by sandy beaches, secluded coves, lava fields and fertile highlands, San Cristóbal features some of the most diverse landscapes in the Galápagos – along with an extraordinary variety of flora and fauna. Giant tortoises, sea lions, blue-footed boobies and magnificent frigatebirds are just a few of the species you’ll find here.

You can get to San Cristóbal by plane from Guayaquil – a direct flight takes one-hour-and-50 minutes – or by ferry from Santa Cruz, which takes around two hours. To help you plan your trip, we’ve picked out the best things to see and do on San Cristóbal. 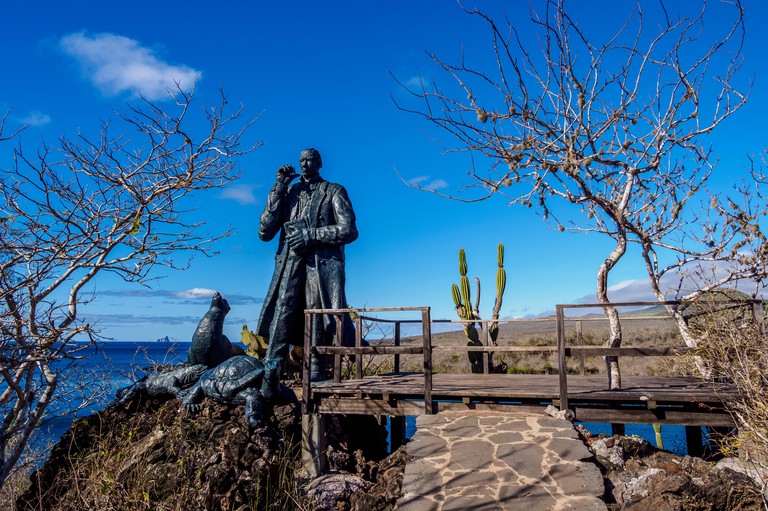 © Karol Kozlowski / Alamy Stock Photo
Cerro Tijeretas (or Frigatebird Hill) offers a superb vantage point for panoramic views of San Cristóbal’s coastline and Kicker Rock. To get there, head to the Interpretation Center at Playa Mann, where the trail begins, winding up through cactus forests and lava fields. At the top, there’s a stone statue of Charles Darwin. The total hike, there and back, is around 1.2mi (2km). Keep an eye out for magnificent frigatebirds, great frigatebirds and blue-footed boobies as you go – you may also spot sea lions in the bay below.

Around a 10-minute walk north of Puerto Baquerizo Moreno, the Interpretation Center is a fantastic place to learn about the history of the Galápagos. You’ll gain an insight into the volcanic origin of the archipelago, its diverse ecosystems, the arrival and evolution of many different species – and the human discovery and colonization of the Galápagos. There’s also a section dedicated to conservation and development of the islands, highlighting the various environmental threats they face today. Admission to the Interpretation Center is free.

Kicker Rock – locally known as ‘Leon Dormido’ or the sleeping lion – is a volcanic ash formation that juts out almost 150m (492ft) from the Pacific Ocean, 45 minutes northeast of Puerto Baquerizo Moreno by boat. The waters around it – especially in the channel which splits Kicker Rock in two – are rich in marine life, including sea turtles, marine iguanas, eagle rays, Galápagos sharks and white-tipped reef sharks. As such, it’s one of the best places to go scuba diving or snorkeling in the Galápagos – an ideal day or half-day excursion from San Cristóbal.

Venture into the Highlands 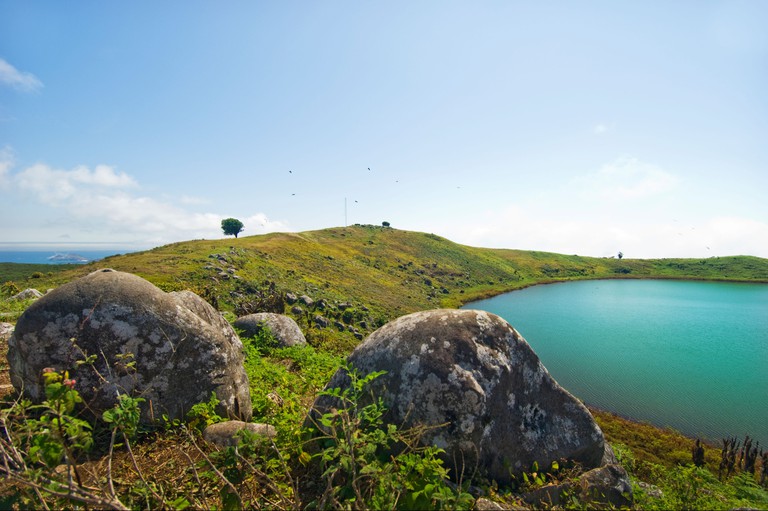 © Maximilian Weinzierl / Alamy Stock Photo
The scenery shifts quite dramatically as you leave the coast behind and head up into the highlands of the southwest side of San Cristóbal. Here, you’ll find some of the most fertile and densely vegetated land in the Galápagos, most of which is uninhabited by humans – other than a handful of farms. El Junco Lagoon – the only freshwater lake in the Galápagos, which fills an extinct volcanic crater at 700m (2,296ft) above sea level – is an excellent place for hiking and birdwatching. Look out for frigatebirds, San Cristóbal mockingbirds and white-cheeked pintails in particular. 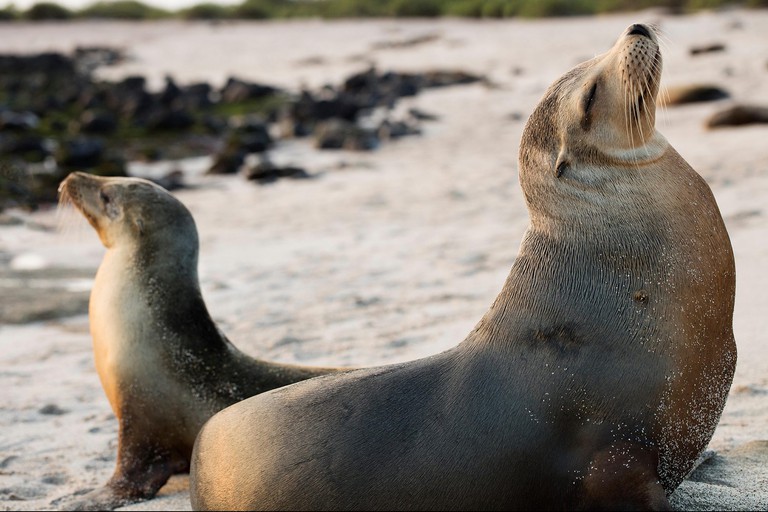 © Peace Portal Photo / Alamy Stock Photo
San Cristóbal is home to one of the largest Galápagos sea lion populations in the archipelago – you’ll find them basking on beaches, sprawled out on benches, gliding through the water and, occasionally, wandering through town. They’re one of only six endemic mammals that can be found on land in the Galápagos and, weighing up to 550 pounds (250kg), the biggest. You’re virtually guaranteed to see them anywhere along the coast of San Cristóbal, but two of the prime spots are Playa Loberia and Playa Punta Carola– where you can swim, surf and snorkel close to them.

Galápagos giant tortoises are the largest tortoise species in the world, growing up to 1.82m (6ft) in length and often weighing over 500 pounds (227kg). The islands were once home to over 200,000 of them, but only around 10 percent of the original population remains today due to human overexploitation and habitat destruction by invasive species. La Galapaguera de Cerro Colorado – on the south side of San Cristóbal – is a reserve and breeding center which protects and grows the population of giant tortoises, while educating visitors and providing an opportunity to see this endemic species up close. Admission is free. 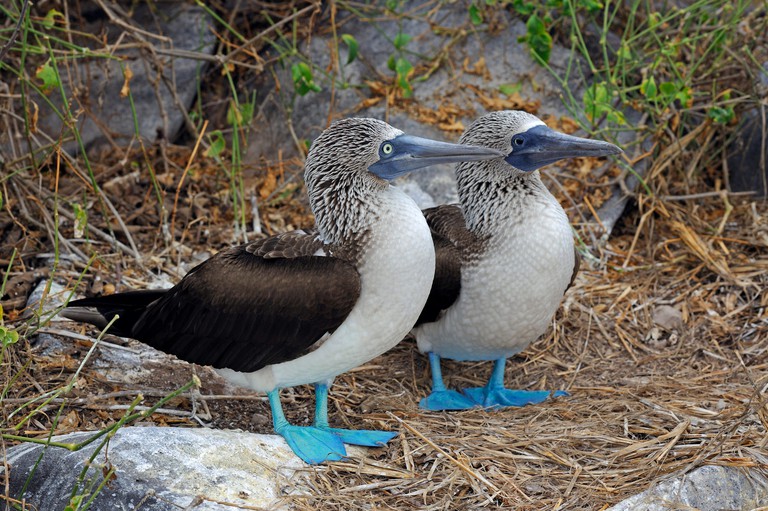 © ImageBROKER / Alamy Stock Photo
To experience a more remote side to the Galápagos, consider a day trip to Española Island – the southernmost island in the archipelago, two hours from San Cristóbal by boat. Gardner Bay – with its pristine white sand beach – is an idyllic spot for swimming and sunbathing in the company of sea lions, while Punta Suarez is a birdwatcher’s paradise. Between April and December, you’ll see waved albatrosses, plus blue-footed boobies, Nazca boobies and Española mockingbirds. You may also spot Christmas iguanas – a subspecies of the marine iguana, unique to Española island, which turns bright red and green during mating season.

Although the abundance of wildlife and beautiful landscapes are the primary appeal of visiting San Cristóbal, Puerto Baquerizo Moreno – the main town and the capital of the Galápagos province – is worth checking out while you’re there. Stop by the Catedral Inmaculada Concepción – a modern church with stained glass windows depicting Galápagos nature – to sample delicious, locally sourced dishes at Muyu Galápagos – one of the best restaurants in the archipelago. Or sip a craft beer at Galápagos Republic Brewing Company and take a stroll along the Malecón San Cristobal – the beachfront promenade, which is invariably dotted with sea lions.