The Top Art Galleries in Guayaquil 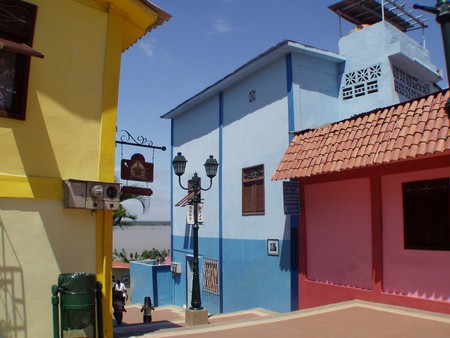 Finding original works by talented Ecuadorian artists is easy in the port city of Guayaquil. Most galleries are located in one of two neighborhoods: along the street of Calle Numa Pompilio Llona in Las Peñas, and near Calle 9 NO in Urdesa. A new kind of gallery and exhibition space also recently opened in the Samborondón district. Each location offers its own special flair.

Hermel Quezada works in the style of magical realism. His work is bright, colorful, and whimsical, perhaps a reflection of the rainbow-colored houses in the surrounding Las Peñas neighborhood. The paintings in his gallery are available to buy.

Roberto Saavedra Walker sells his work from a gallery/workshop on Calle Numa Pompilio Llona, a street in Las Peñas known for being home to several art galleries. Throughout his career, he has explored several media, but he is best known for his oil paintings. His best works are abstract, playing with ancient themes in a modern and surrealist style.

The Man Ging Art Gallery can be found in two locations. The first is in the midtown neighborhood of Urdesa. The gallery occupies a historic home and holds a collection of modern art. The second is downtown, inside the Man Ging Hotel, where they sell the work of many modern Ecuadorian artists.

Imaginar is known in Quito and Guayaquil for its diverse offerings from a wide variety of Ecuadorian artists. Their collection of art for sale includes works by well-known artists such as Jorge Perugache and Frederico Gozenbach. The displays are well lit and the staff are very welcoming to all patrons, even those who are not in the market to buy.

Store
Facebook
Email
Twitter
Pinterest
Copy link
Share
Map View
The Art Gallery of Núñez y Núñez has a long history in the city of Guayaquil. Formerly located in the artsy sector of Las Peñas, Núñez y Núñez can now be found in the trendy Urdesa neighborhood. The gallery displays and sells art from many modern Ecuadorian painters, but the work of the owner, Roberto Núñez, is a major attraction. Núñez, a popular local artist, has worked in several different styles over the past 45 years.
Open In Google Maps
1246 Avenida Víctor Emilio Estrada, Urdesa Guayaquil, Guayas, 90511, Ecuador
+59342888931
Visit Facebook page
Give us feedback

NoMínimo is a cultural space and art gallery located inside the Plaza Lagos shopping center in Samborondón. Exhibitions change often and focus on modern Ecuadorian artists such as Juan Carlos Fernandez, Olga Dueñas, and Michelle Ulloa.
Open In Google Maps
Samborondón, Guayas, Ecuador
+59345020768
Visit Website
Give us feedback
Give us feedback