The Most Incredible Wildlife Destinations in Ecuador and the Galapagos 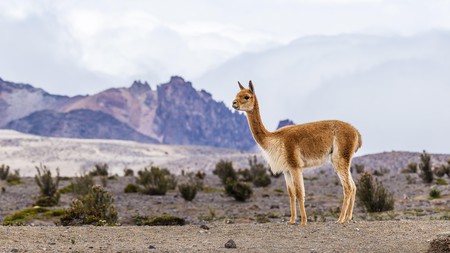 Discover some incredible wildlife on the Galapagos Islands and mainland Ecuador, like this grazing Vicuna in the Andean moors of the Chimborazo | © Patricio Hidalgo / Alamy Stock Photo

Ecuador is one of the most geographically diverse nations in the world, which lends to its incredible biodiversity. In all four geographic regions – the Pacific Coast, the Sierran Andes, the Amazon Basin and the Galápagos – there are incredible wildlife destinations that deserve a place on everyone’s bucket list.

Dreaming of a trip to Ecuador and the Galápagos Islands? You can now go with Culture Trip – one of the most trusted travel brands in the world – on two separate adventures. First, check out our eight-day Ecuador mainland trip – jam-packed with hikes and cultural experiences – and our very special five-day extension to the Galápagos Islands, allowing you to experience one of the planet’s most fascinating ecosystems.

The Paseo del Quinde – a tourism route connecting the capital city of Quito to the birding paradise of Mindo – directly passes the enchanting Tandayapa Valley. This region is home to more than 40 species of hummingbirds, which live at different altitudes.

Many lodges allow day visitors so that tourists can maximize their chances of seeing as many of these colorful, mesmerizing birds as possible. Though rarely seen, the Andean Spectacled Bear loves to eat the bromeliads that flourish in the damp cloud forest. Night-time visitors to many lodges include the Olinguito and the Kinkajou. 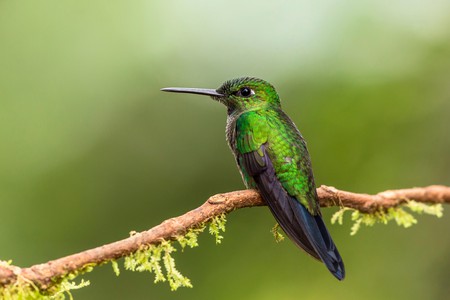 The Buff-Tailed Coronet is one of the 40 hummingbird species in the Tandayapa Valley, Ecuador | © Minden Pictures / Alamy Stock Photo

While the fishing town of Puerto Lopez does not scream beach resort, at first sight, it’s the best location along the Ecuadorian Pacific Coast for wildlife watching. On the mainland, endangered dry coastal forests of the Machalilla National Park are home to 270 species of birds, two species of monkeys and many armadillos.

Nesting grounds of both Blue and Red-footed Boobies – as well as Magnificent Frigate Birds – are found on the Isla de la Plata. This island is also called the ‘Poor Man’s Galápagos’ and is popular for scuba diving and snorkeling to see giant sea turtles and mysterious manta rays. The channel between the island and the mainland is a migratory route for the majestic Humpback Whale, which can be seen from late June through early October. 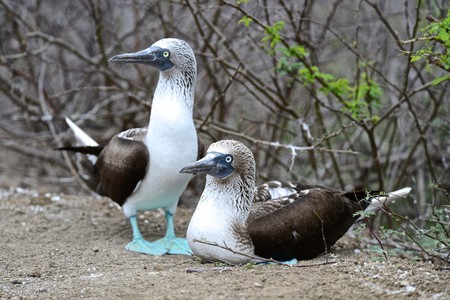 Run by the Jocotoco Foundation – an organization protecting endangered wildlife habitat throughout Ecuador – the Antisanilla Reserve lies two hours outside of Quito. The land protects an important nesting site of the endangered Andean Condor.

These glorious birds regularly ride thermals at the viewing point located just before the Antisana Conservation Area, where raptors like the Carunculated Caracara and wetland species such as the Andean Ibis are regularly observed. The Antisanilla Reserve is also home to the migratory Andean Spectacled Bear and several species of hummingbirds – including the spectacular purple-headed Ecuadorian Hillstar. 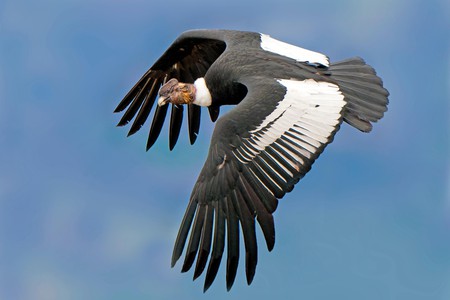 Located on the far side of San Cristobal in the Galápagos archipelago, Punta Pitt is an excellent location for seeing the nesting grounds of all three species of Ecuadorian Boobies. Many other sea birds make this area home, including both species of Frigate Birds and the stunning Red-billed Tropic Bird with its striking long tail.

Most trips to the northeast corner of San Cristóbal include snorkeling the small rocky islands where many colorful fish swim among the lava formations. And, during the right season, keep your eyes open for Humpback Whales.

San Cristóbal is the second destination you’ll visit as part of our carefully curated five-day trip to the Galápagos Islands, led by our Local Insider. 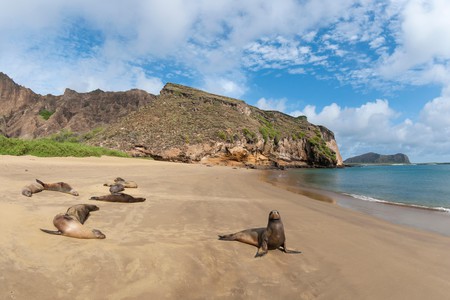 Leon Dormido – an outcropping of volcanic rock – juts out from the Pacific Ocean just off the coast of Puerto Baquerizo Moreno on San Cristóbal Island in the Galapagos. This formation, also called Kicker Rock, attracts an unbelievable diversity of wildlife.

Underwater, starfish and sea urchins cling to the rocky surface, sea lions swim the channel between the towering walls and regular visitors like the Spotted-Eagle Ray and Hammerhead Shark swim in the deep blue waters. Above the waterline, fur seals sun on rocky outcroppings and sea birds like the Blue-Footed and Nazca Boobies, magnificent and great Frigate Birds and the Red-Billed Tropic Bird perch high overhead.

Our five-day Galápagos Islands adventure includes a private snorkeling tour of Kicker Rock, bringing you face to face with these amazing creatures. 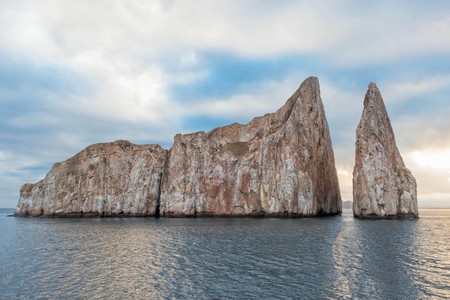 Penguins. This reason alone should be enough to visit Las Tintoreras, a collection of small islands accessible by panga boat from Puerto Villamil on the Isla Isabela in the Galapagos.

The ride overpasses rocky outcrops covered with comical Blue-Footed Boobies and stunning Galapagos Penguins. The water is so clear that it is possible to see the penguins – along with sea lions and sea turtles – swimming alongside the boat.

Las Tintoreras is home to the Marine Iguana, a gargoyle of a reptile that loves to swim in the bright blue waters and sunbathe on the pebbled beach. In a protected cove off one of the islands, visitors snorkel with sea turtles and hunt for small creatures in the crevices of underwater lava formations. 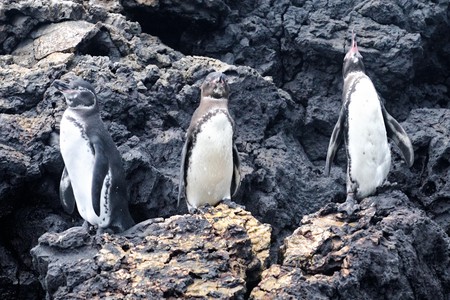 South Plaza Island is an isolated island off the coast of Santa Cruz in the Galapagos archipelago. A loop trail on the island allows for minimal exploration of this colorful but stark destination. Most visitors come to see the Galápagos Land Iguana, a bright yellow reptile with eyes that look like cracked glass marbles.

The Cactus Finch makes its home in the paddles of the prickly pear cactus dotting the landscape. South Plaza Island is a favorite with sea lions who own the small dock where passengers disembark. The nearby shallow water is home to mating rays while sea birds nest in the rocky cliffs overlooking the ocean, swooping and diving in a rapid frenzy.

A guided tour of South Plaza Island – led by our Local Insider – is included on our private small-group trip to the Galápagos Islands, giving you the best chance of seeing the endemic Land Iguana in its natural habitat, up close. 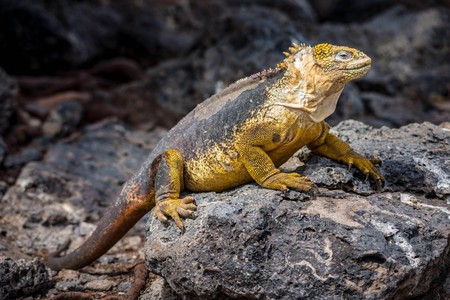 These waterways provide the best opportunities to observe pink Amazon River Dolphins, Manatees and Capybaras, the largest rodents in the world. Other hard-to-see mammal species are more easily seen at the water’s edge, including Jaguars, Ocelots, Tapirs, Giant and Neotropical Otters. 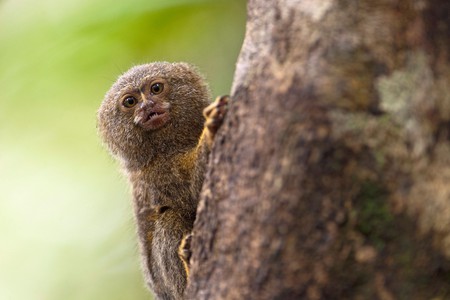 The Yasuni National Park is a Unesco Biosphere Reserve and is home not only to an uncounted number of animal species but the native Huaorani tribe and two other uncontacted indigenous tribes. The only way to visit this isolated location is by plane or boat.

With almost 600 bird species, the Yasuni is a treasure trove for bird watchers – but other nature lovers have plenty of reasons to visit. The flora of this rainforest is rich with colorful bromeliads, flowering orchids, giant ferns and towering trees. Nighttime is great for spotting an amazing variety of insects, frogs and spiders here. While mammals in the region can be particularly hard to see, it’s not impossible to spot Pumas, Jaguars, Ocelots, Tapirs, Anteaters, Armadillos and monkeys. 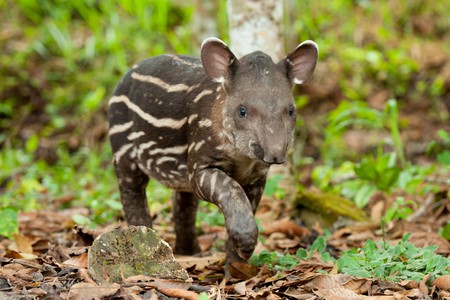 While the diversity of wildlife at the Chimborazo Wildlife Refuge is much less than any of the protected lands in the Amazon Basin, there are few other places in Ecuador to see the wild vicuña, an odd-looking camelid related to the llama and alpaca.

Its large eyes and sweeping eyelashes look almost comical. Herds of Vicuña roam the area around the highest mountain in Ecuador, making excellent opportunities for panoramic shots with local wildlife.

Another rare species that can only be seen on these Andean slopes is a sub-species of the Ecuadorian Hillstar Hummingbird. On Chimborazo, the Star of Chimborazo Hummingbird has an iridescent turquoise collar that shines against its deep purple head and brilliant white chest. 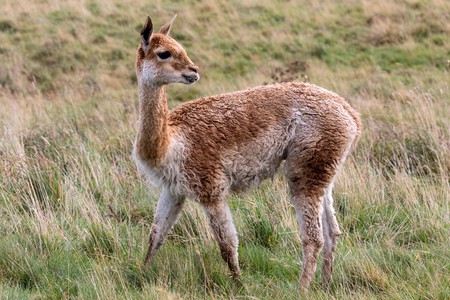