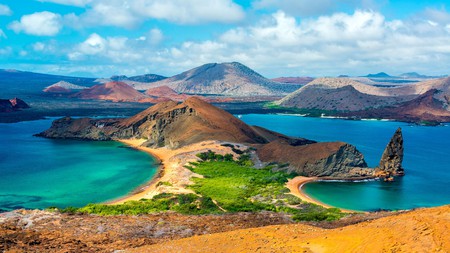 The Galápagos Islands have some of the best snorkeling and scuba diving sites in the world, allowing you to spot an array of aquatic creatures up close, including sea turtles, marine iguanas, penguins, sea lions and hammerhead sharks. As well as the rich concentration of biodiversity, the underwater scenery, characterised by a myriad of volcanic rock formations, is spectacular.

During the rainy season, from January to June, the water is noticeably warmer at around 24C-27C (75F-80F); in the dry season, from July to December, the water cools to 21C-24C (70F-75F). While warmer water is usually preferred for snorkeling or scuba diving, opt to explore during the dry season as the colder, nutrient-rich water brought to the Galápagos by the Humboldt Current means that marine life is especially abundant.

Whenever you choose to go, embarking on an underwater adventure in the Galápagos is an unforgettable experience. Here, we select the top snorkeling and scuba diving sites in the archipelago.

Keen to explore the Galapagos Islands? Join Culture Trip’s specially curated five-day trip to the archipelago, in which you’ll snorkel the Itabaca Channel, walk with giant tortoises and swim with sea lions at Punta Carola Beach. 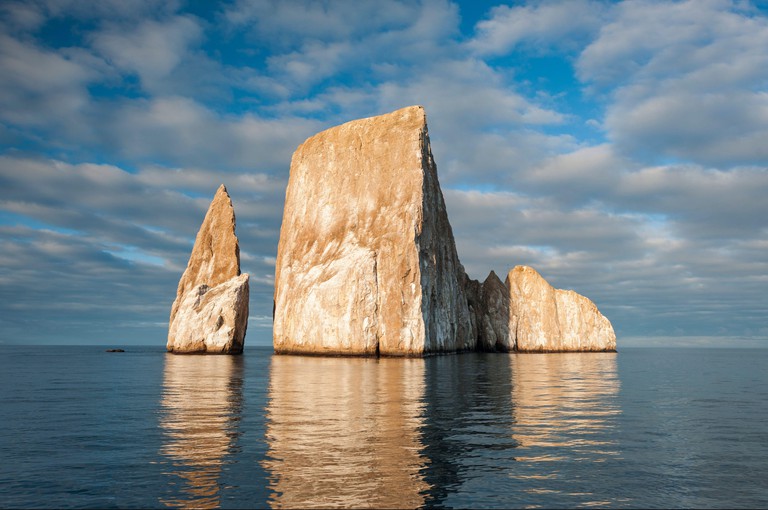 Kicker Rock – otherwise known as Leon Dormido (Sleeping Lion) – is a 150m (492ft) high tuff cone composed of compacted volcanic ash. It’s a 45-minute boat ride northeast of Puerto Baquerizo Moreno, the main town on San Cristóbal. The waters around it are ideally suited to both snorkeling and scuba diving, particularly in the channel that splits the rock in two. You’ll have the chance to spot white-tipped reef sharks, Galápagos sharks, hammerhead sharks, sea turtles and many types of stingray. 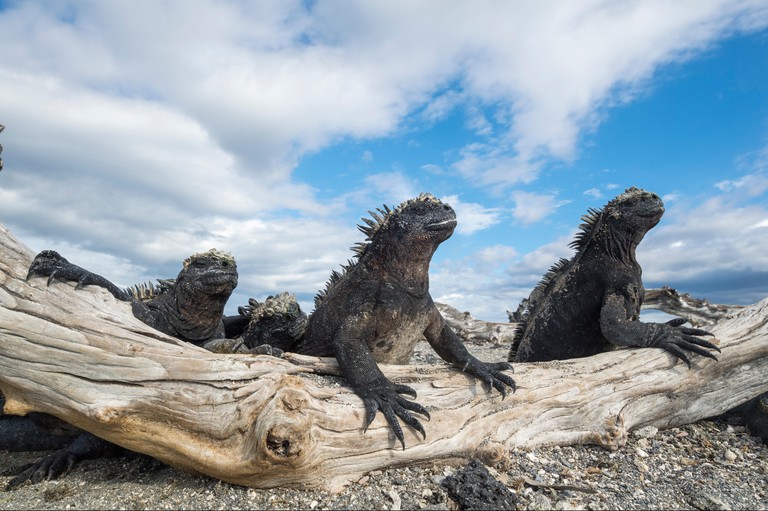 © Minden Pictures / Alamy Stock Photo
Punta Espinosa, at the northern tip of Fernandina Island (the westernmost island in the Galápagos), is renowned for its barren volcanic landscape and dense concentration of wildlife. It’s home to one of the largest populations of marine iguanas in the Galápagos, and when snorkeling in the Bolivar Channel, which separates Fernandina from Isabela Island, you might also spot Galápagos penguins gliding through the water. Keep an eye out for sea lions, sea turtles and dolphins too. 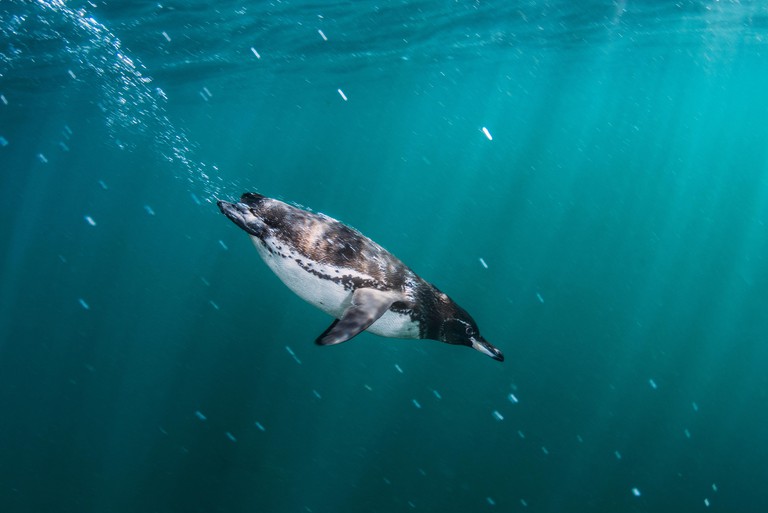 © Minden Pictures / Alamy Stock Photo
Across the Bolivar Channel from Punta Espinosa, Tagus Cove is a sheltered bay below Darwin Lake, formerly used as a pirate’s hideaway and named after a British ship that visited Isabela Island in 1814. Its seabed is carpeted in green algae, which gives the impression of an underwater pasture, and the nutrient-rich water attracts all kinds of marine life, such as Galápagos penguins, sea lions, sea turtles, seahorses and, occasionally, Port Jackson sharks. Don’t fancy snorkeling? Tagus Cove is also a great spot to go kayaking.

Natural Feature
Facebook
Email
Twitter
Pinterest
Copy link
Share
One of two main visitor sites on Genovesa Island – a horseshoe-shaped island in the far north of the Galápagos – Prince Philip’s Steps (also known as El Barranco) is a steep, rocky path leading up to a plateau above a cliff face. Beneath lies a submerged caldera, perfect for deep-water snorkeling with shoals of colorful fish, including butterfly, parrot and unicorn varieties. If you’re lucky, you might also spot manta rays and hammerhead sharks.

Natural Feature
Facebook
Email
Twitter
Pinterest
Copy link
Share
This eroded volcanic crater, just off the north coast of Floreana Island, is now almost entirely submerged under water, apart from a circle of jagged rocks that pierce the surface. It was the first permanently inhabited island in the Galápagos. Moray eels, surgeonfish, yellow-tailed grunts and scorpionfish are common here, while spotted eagle rays, golden rays and hammerhead sharks are worth looking out for. You can snorkel or dive, but as the current can be strong, it’s best suited to more experienced swimmers. Take extra caution near the rocks. 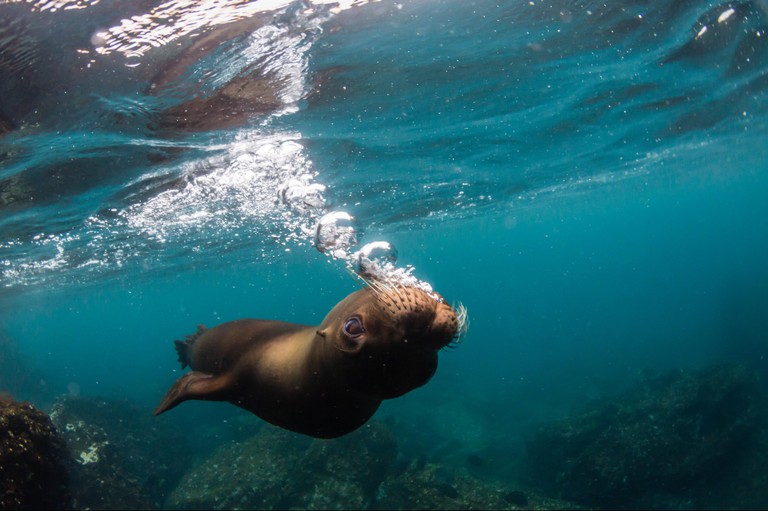 © robertharding / Alamy Stock Photo
Pinnacle Rock is a tall, pointed, volcanic rock structure at the edge of Playa Dorada on Bartolomé Island, rising out of the Pacific Ocean like a giant shark tooth – similar to Kicker Rock. The water in the crescent-shaped bay is typically calm and clear, and accessible directly from the beach, making it a prime snorkeling and swimming location. Expect sea lions, sea turtles and penguins.

Natural Feature
Facebook
Email
Twitter
Pinterest
Copy link
Share
On the northern shores of Isabela Island, Punta Vicente Roca is a sloping underwater wall, which descends to a maximum depth of 27m (89ft) in the Bolivar Channel. With a protected cove on either side, it’s equally suitable for snorkeling and scuba diving. The water temperature drops rapidly the lower down you go, so wearing a wetsuit is essential for deeper dives. Like many snorkeling and diving destinations in the Galápagos, you’ll see marine iguanas, sea lions and penguins – and potentially mola mola (sunfish), one of the largest species of fish in the world. 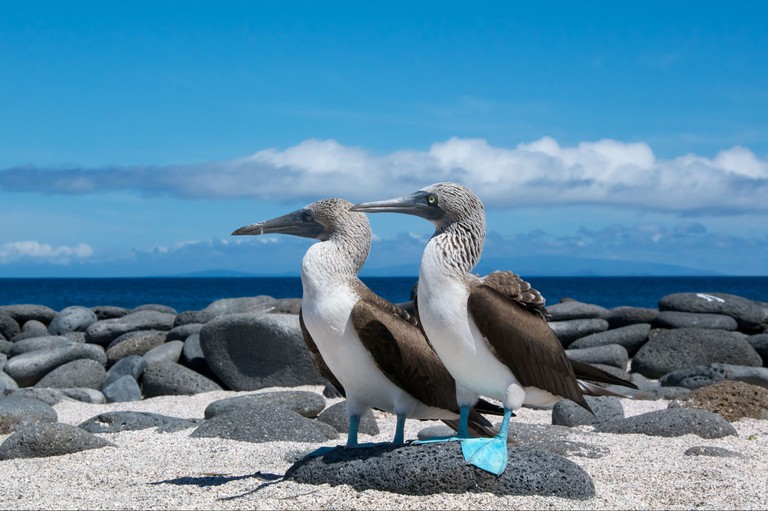 A small, flat, uninhabited island just north of Baltra Island, North Seymour formed around 2m years ago when shifting tectonic plates caused a volcanic uplift in the sea bed. Known for having large colonies of blue-footed boobies and frigatebirds, it’s also one of the best places in the Galápagos to spot white-tipped reef sharks, hammerhead sharks, tiger sharks and Galápagos sharks. The lack of strong ocean currents mean it’s suitable for snorkeling and scuba diving.

Natural Feature
Facebook
Email
Twitter
Pinterest
Copy link
Share
Cerro Tijeretas – also known as Frigatebird Hill – is an easy 2km (1.2m) walk from the center of Puerto Baquerizo Moreno, the main town on San Cristóbal Island and the capital of the Galápagos province. You’ll pass through lava fields and cactus forests before arriving at a viewing point with magnificent panoramas of the island and Kicker Rock in the distance. The bay below is an idyllic spot to cool off and snorkel alongside sea lions, sea turtles and shoals of tropical fish. It’s one of the few places in the Galápagos where you can snorkel freely without a guide. 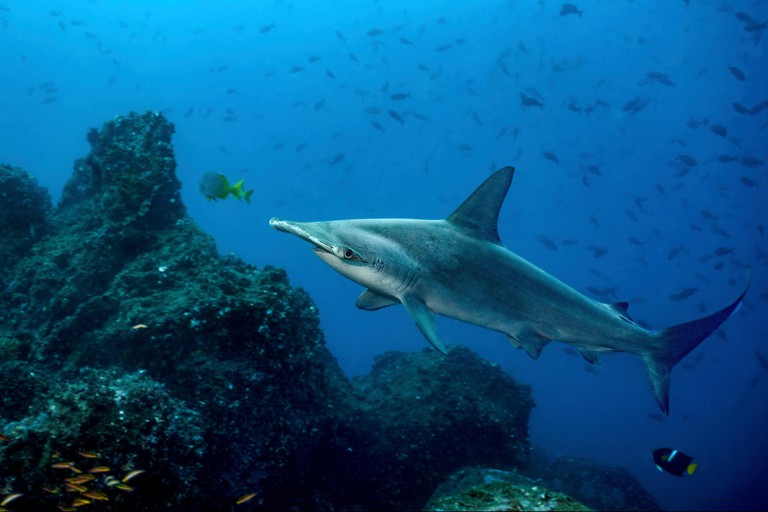 © Mint Images Limited / Alamy Stock Photo
The aptly named Shark Point – just off Wolf Island (one of the most remote Galápagos islands in the far north of the archipelago) – has a large population of Galápagos and hammerhead sharks that are especially visible between May and November. If you’re really fortunate, you may even catch a glimpse of a whale shark, which, reaching up to 18m (59ft) long, is the largest shark species in the world. Due to the strong currents and occasional harsh surges, it’s best suited to experienced scuba divers. 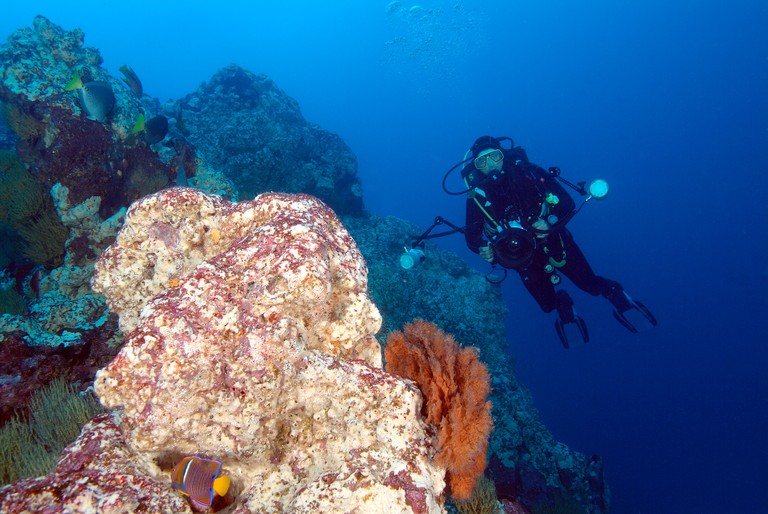 © Amar and Isabelle Guillen - Guillen Photo LLC / Alamy Stock Photo
Gordon Rocks is the remains of an eroded cone volcano off the northeast coast of Santa Cruz Island (the most populated Galápagos island). The central crater, which descends to a depth of 25m (82ft), is one of the best places in the region to spot large hammerhead sharks. You can also see Galápagos sharks, blacktip sharks, Galápagos eels and barracudas. Like Shark Point, the currents here can be strong – it’s sometimes called the Washing Machine – so diving here is not recommended for beginners. 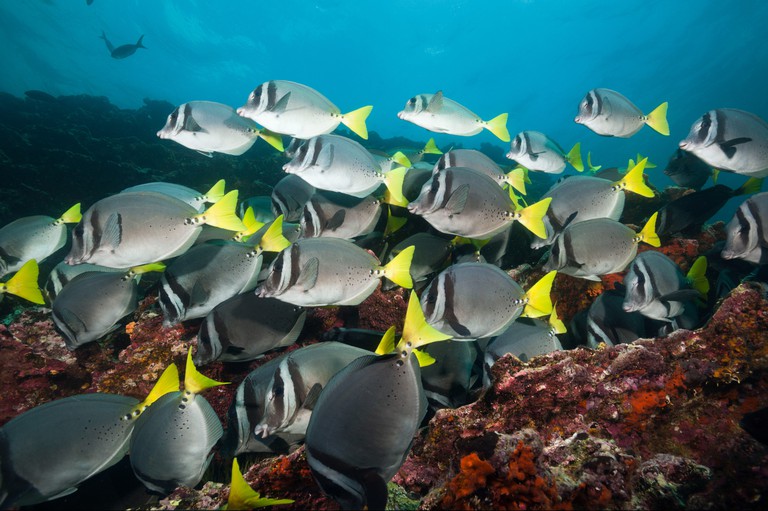 © mauritius images GmbH / Alamy Stock Photo
Cousins Rock, off the northeast coast of Santiago Island, is home to penguins, sea lions, blue-footed boobies and pelicans, and an abundance of marine life below the surface. Terraced steps descend to a depth of 40m (131ft), and with good visibility and moderate currents, it’s one of the most reliable year-round scuba diving sites in the Galápagos – best suited to intermediate and advanced divers. As well as sea turtles, spotted eagle rays, manta rays, Galápagos sharks and white-tipped reef sharks, you’ll also see endemic Galápagos black coral here.
Give us feedback