Journey to the Middle of the World: How to Reach Ecuador’s Equator Line 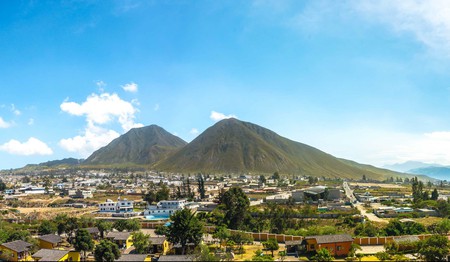 Along with Brazil and Colombia, Ecuador is one of three South American countries intersected by the equator – a fact not altogether surprising as Ecuador directly translates as ‘equator’ in Spanish. It sits around 15mi north of Quito, making it an easy excursion from the capital. Here’s how to reach the equator line in Ecuador.

The first scientific measurement of the equator was carried out by a group of French and Spanish scientists during an 18th-century expedition, led by Charles Marie de La Condamine, Pierre Bouguer and Louis Godin. Setting sail from France in 1735, they arrived in Quito in 1736 – passing through Colombia and Panama en-route.

After several years of painstakingly measuring distances using the triangulation method, they proved that the Earth isn’t a perfect sphere, but that it bulges at the equator and flattens slightly at the poles. As part of the expedition, they determined the location of the equator: a 24,901mi (40,075km) line wrapping around Earth’s circumference at zero degrees latitude, equidistant from the north and south poles. 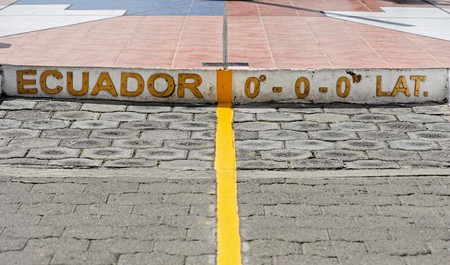 In 1936 – to mark the 200th anniversary of the equator expedition – the government of Ecuador commissioned a 10m (32.8ft) high monument, which was placed at a site now known as the ‘Ciudad Mitad del Mundo’ – Middle of the World City. This was later replaced by a 30m (98.4ft) high monument topped with a five-ton globe, built between 1979 and 1982. 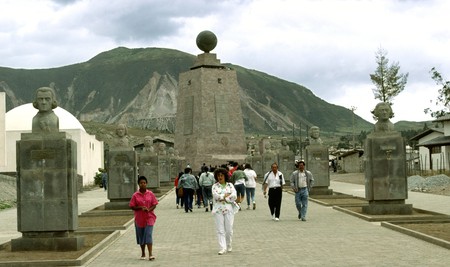 Ciudad Mitad del Mundo, otherwise known as the Middle of the World City at the equator in Ecuador | © Neil McAllister / Alamy Stock Photo

There’s a yellow line – which supposedly represents the equator – leading up to the monument and inside, you’ll find a small museum dedicated to the indigenous cultures of Ecuador. The Ciudad Mitad del Mundo complex is open every day from 9am until 6pm and entry costs $5 (£3.65).

Subsequent readings – using modern GPS technology – indicate that the precise location of the equator is actually around 240m (787ft) to the north, but some scientists suggest that the equator is better imagined as a strip which is a few miles wide – due to the fact the north and south poles aren’t completely static.

It’s also worth checking out the Intiñan Solar Museum – open 9.30am until 5pm daily – less than a 10-minute walk from the Ciudad Mitad del Mundo, which claims to be the true home of the equator. It features several interactive exhibitions and outdoor activities loosely based on the science of the equator and you can get your passport stamped to commemorate your visit. Entry costs $4 (£2.92) and includes a guide. 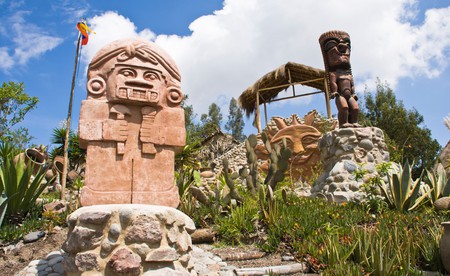 There are various other equator monuments in Ecuador – such as those in Cayambe and Calacalí – but if you want to snap an iconic photo with one foot in either hemisphere, head to the Intiñan Solar Museum of Ciudad Mitad del Mundo.

Interested in visiting? You’ll have the option to do so as part of Culture Trip’s exclusive eight-day Ecuador adventure, led by our Local Insider.

Getting to the Real Equator Line in Ecuador

The cheapest way to get to the equator is to take the Quito Metrobus from the La Ofelia bus terminal – at the northern end of the purple line. From there, board a bus directly to the Ciudad Mitad del Mundo – just ask the bus driver to make sure you’re getting on the right one. The total journey costs less than $1 (£0.72) and can take less than an hour if traffic is light, but can be significantly longer at busier times.

If you’d rather travel by private vehicle, expect to pay around $20 (£14.61) each way for a taxi from the city center. Official taxis are yellow, have orange number plates and feature registration numbers on the doors and windscreen. Apps such as Uber and Cabify, meanwhile, are safe and reliable alternatives.

There are also plenty of tour providers offering half and full-day trips from the city center, many of which also include a ride on the TelefériQo gondola and a visit to the Pululahua crater. 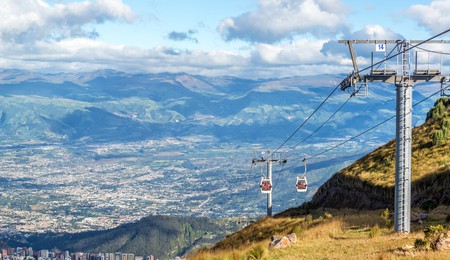