How the Galápagos Islands Inspired Charles Darwin's Theory of Evolution 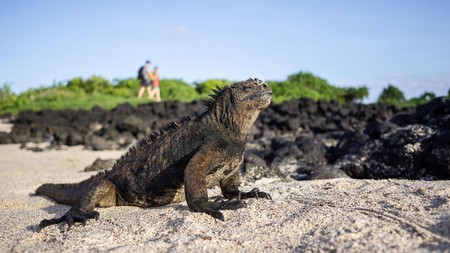 On 15 September 1835, a young geologist and amateur naturalist named Charles Darwin first arrived in the Galápagos Islands. Darwin was responsible for surveying rocks and volcanoes, but he also noticed, curiously, many of the mockingbirds, finches and tortoises were different from one island to the next. Thus began evolutionary theory as we know it.

Darwin had seen natural selection in action and when his ship, the HMS Beagle, returned home to England after an epic five-year circumnavigation of the world, he began forming his Theory of Evolution. Today, Darwin’s legacy continues on the Galápagos Islands in the form of the Charles Darwin Research Station, where research and conservation help to preserve this unique ecosystem. Here’s how the Galápagos Islands inspired Charles Darwin’s Theory of Evolution, plus some other islands worth visiting to learn more about his time in the archipelago.

If you’d like to tread in Darwin’s footsteps, embark on Culture Trip’s five-day, small-group adventure around the Galapagos Islands. Marvel at the astonishing ecodiversity here, just as he did, by swimming with sea lions at Punta Carola , sleeping alongside giant tortoises in El Chato nature reserve, and snorkeling and kayaking around the islands. 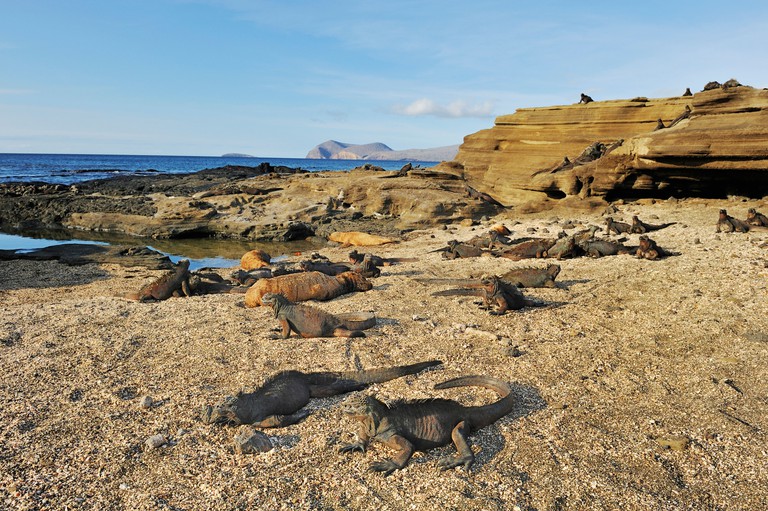 © Rolf Nussbaumer Photography / Alamy Stock Photo
Darwin made landfall on Santiago Island on 5 October 1835, having already spent weeks sailing around the Galápagos. He was left here for nine days, and filled his time collecting specimens and taking notes. He reported that the island teemed with iguanas, although the wildlife on Santiago would suffer before the Galápagos Islands transformed into a national park in the 20th century. You can land in the same bay as Darwin and watch fur seals hang out on rocks before hiking inland in search of flamingos and rare white-cheeked pintail ducks. 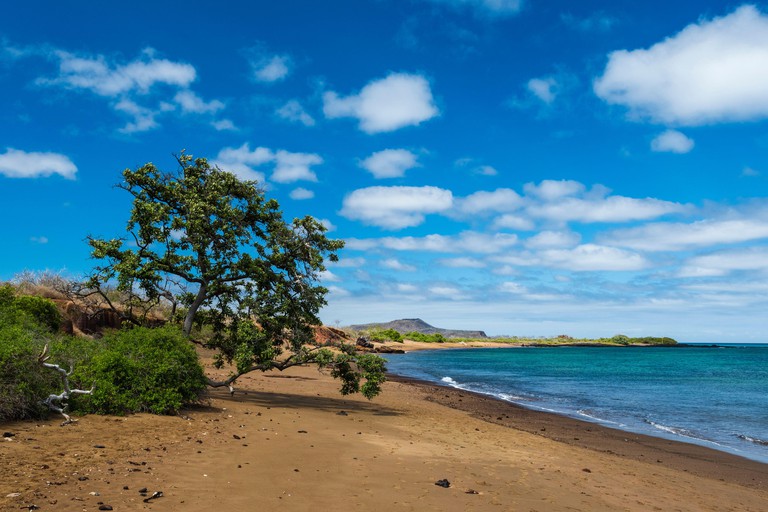 © Globe Stock Premium / Alamy Stock Photo
Floreana Island is only home to around 100 residents, but the history of human settlement here is just as intriguing as the wildlife. Whalers built a post office in 1793, before a shipwrecked Irish sailor named Patrick Watkins survived alone for several years in the early 1800s. When HMS Beagle arrived, Ecuador had turned Floreana into a prison, but it was here that Darwin describes four unique species of mockingbird that went on to influence his theory. Visitors might spot a Floreana mockingbird today, while Galápagos flamingos and the Galápagos petrel are often seen around the island. 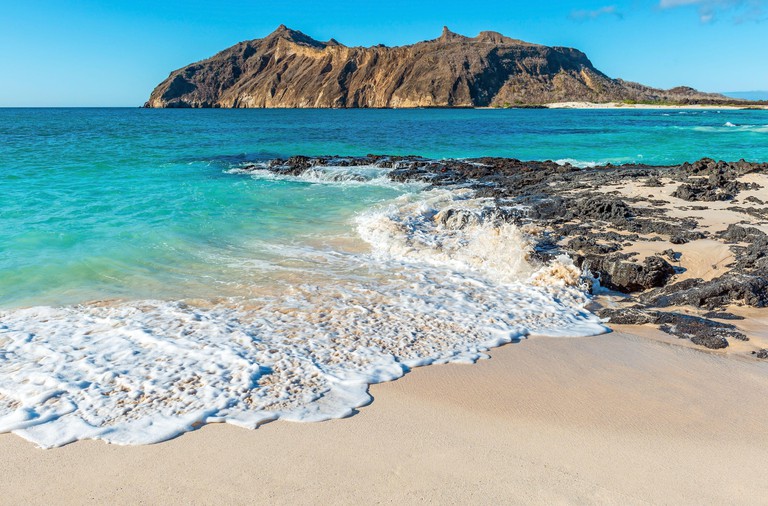 © Sébastien Lecocq / Alamy Stock Photo
San Cristobal is the easternmost island in the archipelago and home to the provincial capital. Just like Darwin, visitors usually land here first when they visit the Galápagos. The main, waterfront street in the capital is named after Charles Darwin and you can learn more about his exploits and findings at the Galápagos National Park visitors center. The island is best-known today for its giant tortoise breeding reserves, but you’ll also find beaches covered in hermit crabs, huge sea lion colonies, and some of the best scuba diving sites in the Galápagos Islands. 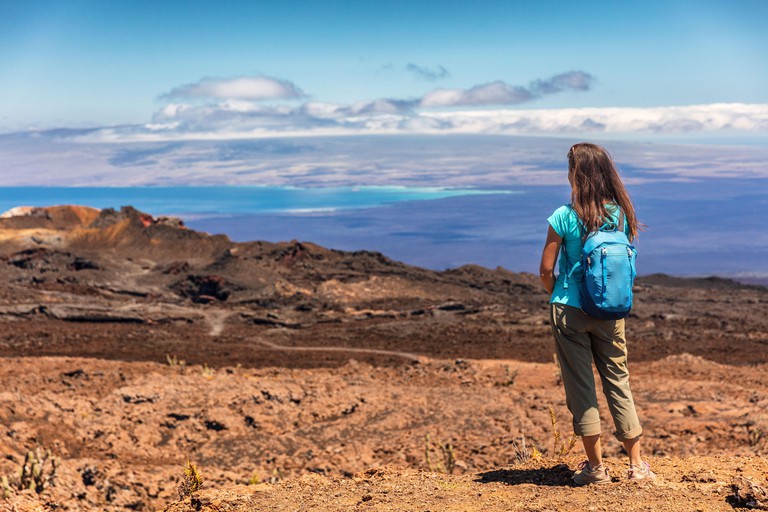 © Maridav / Alamy Stock Photo
With 4,662sqkm (1,800sqmi) of rugged, volcanic landscapes to explore, Isabela Island is the largest island in the Galápagos. Darwin was originally drawn here by the many lava fields and volcanoes, and you’ll be just as impressed by the otherworldly scenery as he was. An arduous hiking trail leads to the summit of the Sierra Negra volcano, where you’ll be standing above one of the largest volcanic calderas in the world. Darwin Lake sits within a flooded crater and Volcan Chico erupted as recently as 1979. If you’re extremely lucky, you might spot a mangrove finch – although it’s estimated there might be fewer than 100 left on Isabela Island. 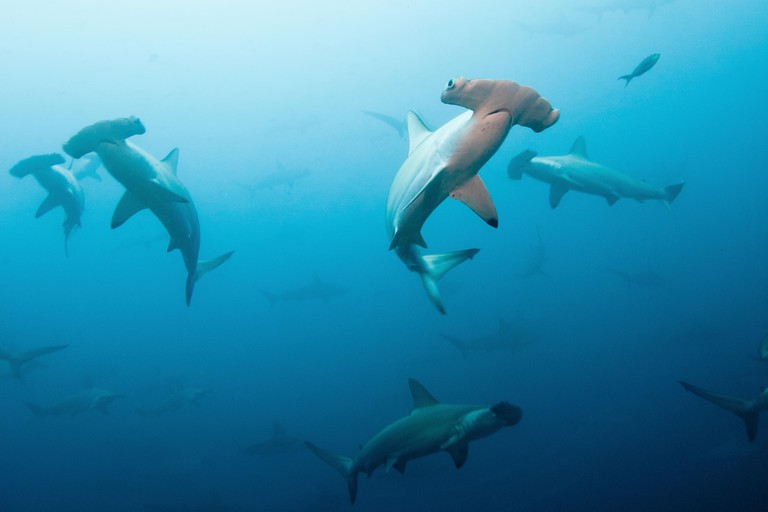 © Nature Picture Library / Alamy Stock Photo
Uninhabited, remote and difficult to reach – even by Galápagos standards – Marchena Island is the only island in the world where you can find the lava lizard in its natural habitat. This volcanic caldera is a popular destination for diving trips, as the surrounding waters are some of the most biodiverse in the Galapagos. Punta Espejo is famed for its hammerhead shark sightings, while Punta Mejia is home to large populations of rays. If Darwin had been a marine biologist, he would have loved Marchena Island. 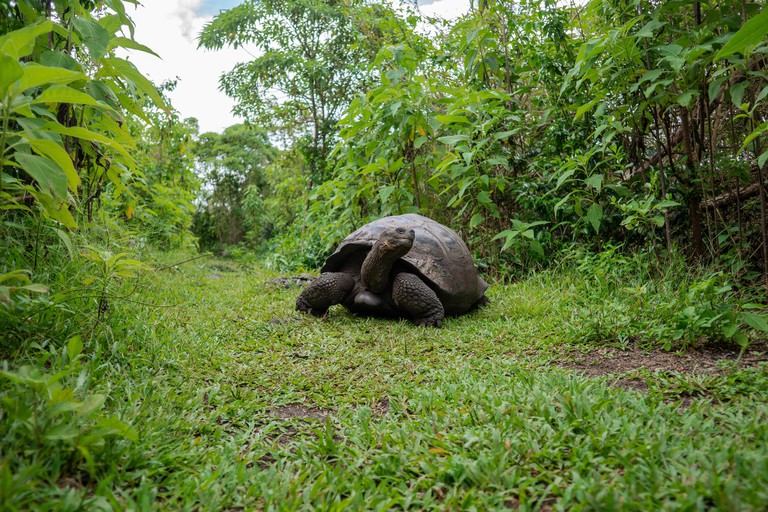 © Dominik Greenwood / Alamy Stock Photo
Pinta Island is one of the most isolated islands in the Galápagos and known for being the original home of Lonesome George, one of the largest and oldest giant tortoises that ever lived. The island was once home to thousands of giant tortoises, but ecological destruction caused their numbers to dwindle. Recently the Charles Darwin Research Station has been pioneering conservation programmes that have helped a resurgence in tortoise numbers. Because of the fragility of the ecosystem, it’s not possible to land on Pinta Island, but you can visit a marine conservation area in the north where you’ll see eels, rays, sharks and more on a diving trip.
Give us feedback