Ecuavóley: What to Know about Ecuador’s National Sport 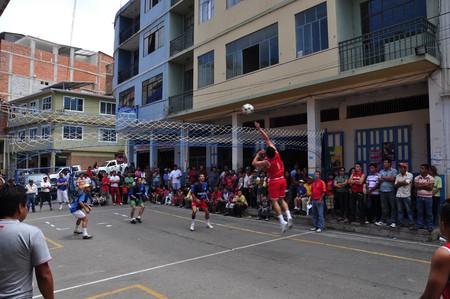 Ecuavóley is a form of volleyball invented by Ecuadorians. It is not clear when it was founded, however, since 1943 the sport has spread to not only all over Ecuador, but also countries like Colombia, the United States, and even Spain. Ecuavóley is Ecuador’s own version of volleyball. It is practised all over Ecuador in neighbourhoods, streets and parks. It is a sport that is welcoming to everyone and you don’t need to be a professional to participate. However, Ecuavóley is also a serious sport with tournaments and national championships.

It is not known when the Ecuavóley officially started, but people believe it was originated in the mountain region around 1895. In the beginning, Ecuavóley was considered a sport for the lower class and specifically taxi-drivers, but it has expanded since then. From 1943 towards 1957 neighbourhoods in Quito formed different teams, and by 1958 several leagues were formed to get more structure, rules and order for the games. The first championship between teams was held in Quito the same year.

A few years later Ecuavóley spread across the country, and in 1971 the first national championship was created in Ibarra where 26 teams were competing. In 1990 there were over 8,000 teams registered and 200 leagues, with half of them being located in the capital, Quito. Ecuavóley expanded a lot since the known history from 1943, where today the game also has its own app to keep track of scorings. If you are in Quito you can see the game being played every day, especially in the afternoon. The game is held in Parque la Carolina near the shopping centre Centro Comercial CCI. 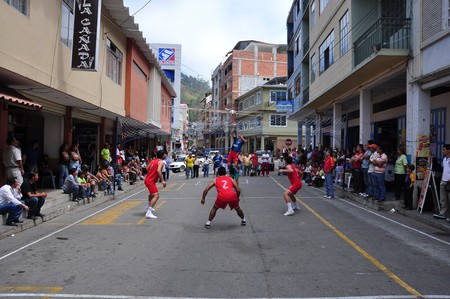 The setter: The setter is at the front and sends the ball over the net.

The server: The server sends the ball through the air.

The flyer: The flyer plays behind the setter and the server. This position acts as the defender of the team and recovers the ball for the server.

Each team has three players: the setter, the server, and the flyer.

The dimensions of the field have to be the same: nine meters wide and 18 meters long.

It has to be played with a Mikasa ft-5 soccer ball.

You can only hold the ball in your hand for a maximum of one second.

You can’t touch the net or step on the line.

You can’t kick the ball.

The net has to be 2.85 meters high and the width should be around 60 centimetres.

Use only one hand to serve.

You have to say bola! when you are going to serve.

The serve can be done from anywhere, as long as both of the server’s feet are on the server line.

A point is scored when the ball touches the ground in your opposing team’s side of the court.

Games are made up of two sets each of 15 points.