Malecon Salado, Guayaquil
With lots of outdoor spaces to enjoy the warm climate as well as places to escape the heat, like historic churches, museums of modern art and ancient artifacts, and cafés both modern and traditional, Guayaquil makes for an excellent introduction to the rich culture of Ecuador. This list just scratches the surface.

Museum
Museo Presley Norton | ©Ministerio Cultura y Patrimonio | Flickr
The Presley Norton Museum displays a collection of more than 8,000 pieces of art from the pre-Columbian Valdivia culture. A local businessman and his wife donated this collection and their former home to the Ministry of Culture and Heritage for the enrichment of the Ecuadorian people.
More Info
Open In Google Maps
200 Boulevard 9 de Octubre, Nueve de Octubre Oeste Guayaquil, Guayas, 90310, Ecuador
+59342293423
Visit website

The Zoo at the Parque Histórico

Park, Zoo
Parque Histórico Samborondón | © Iguanageek/Flickr
The wonderful outdoor zoo and gardens at the Parque Histórico are worth a couple of hours of your time. The animals are kept in open pens with very few of them behind bars or nets. The birds are perched very close to the walkway making for easy photography.
More Info
Open In Google Maps
Avenida Rio Esmeraldas, Samborondón, Guayas, 92301, Ecuador
+59342832958
Visit website

A canoe trip through the dark mangrove forests of the Ecuadorian coasts should be on everyone’s bucket list. This endangered habitat is slowly being lost to encroaching shrimp farms unless the government sees an economic advantage to protecting more land. 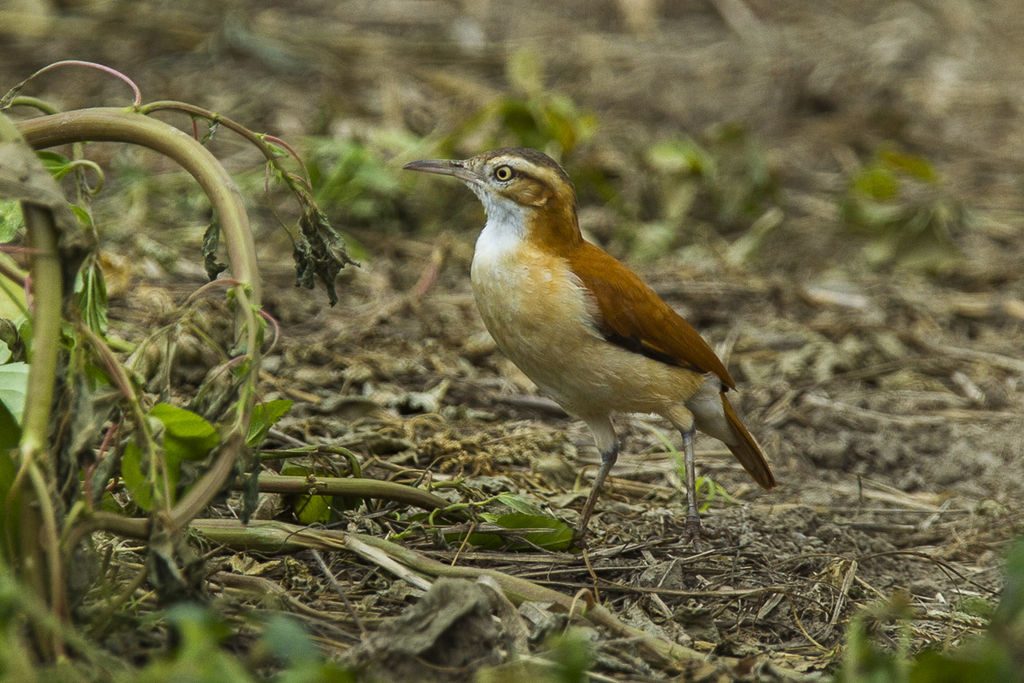 Museum
MAAC | ©Ministerio Cultura y Patrimonio | Flickr
One of the better collections of ancient pottery in Ecuador can be found at the Museum of Anthropology and Modern Art (M.A.A.C). Anyone wanting to learn about ancient Ecuadorian cultures living along the coast before colonization should take the time to tour this special museum.
More Info
Open In Google Maps
206 Malecón Simón Bolivar, Parroquia Pedro Carbo - Concepción Guayaquil, Guayas, 90313, Ecuador
+59342309400
Visit website

Park
Malecon Salado, Guayaquil
Before the Malecón 2000, this was the boardwalk where visitors would spend their evenings catching a cool breeze. Today, it is still a popular destination for local residents. This boardwalk is built on an estuary rather than on the main river.
More Info
Open In Google Maps
2do Callejon 5 NO, Guayaquil, 90511, Ecuador
+59342692693
Visit website

A trip to Guayaquil would not be complete without a trip on a tried and true pirate vessel. The options to sail include one-hour tours on the Río Guayas with an open bar and pirate show. 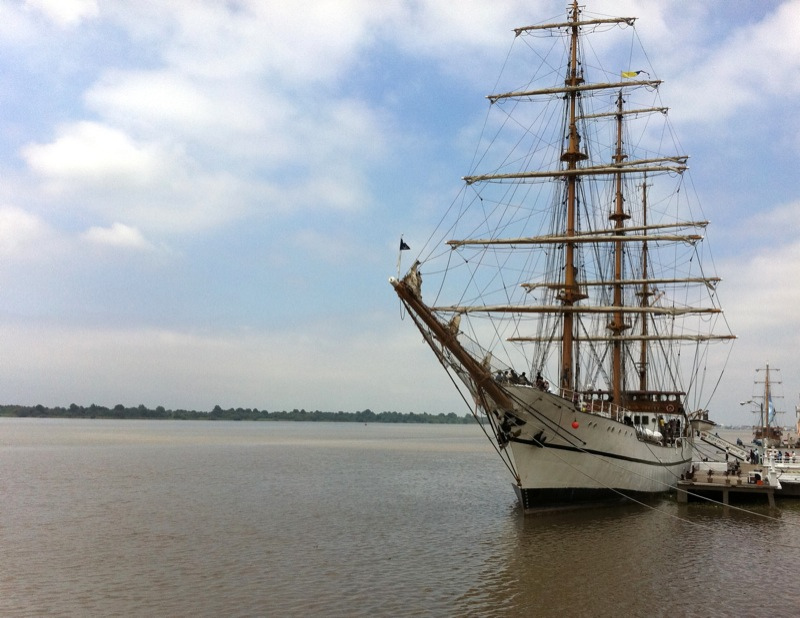 Memorial
Torre Morisca | © David Brossard/Flickr
The Torre de Reloj, or the Clock Tower, has a long history in Guayaquil. The oldest part of the edifice is the clock face, which was purchased from England in 1842. It has resided in many locations since, but has found its latest home in the Torre Morisca, or the Moorish Tower, not far from the historic Palacio Municipal.
More Info
Open In Google Maps
Guayaquil, Guayas, 90313, Ecuador

Located at the very end, or very beginning depending on your point of departure, of the Malecón 2000 is the tallest building in Ecuador. The Point is a modern structure of unique design, somewhat like a long cigarette placed on its end and twisted so that it appears crinkled. It is the work of Ecuadorian architect Christian Wiese.
The Point, Numa Pompilio Llona, Guayaquil, Ecuador 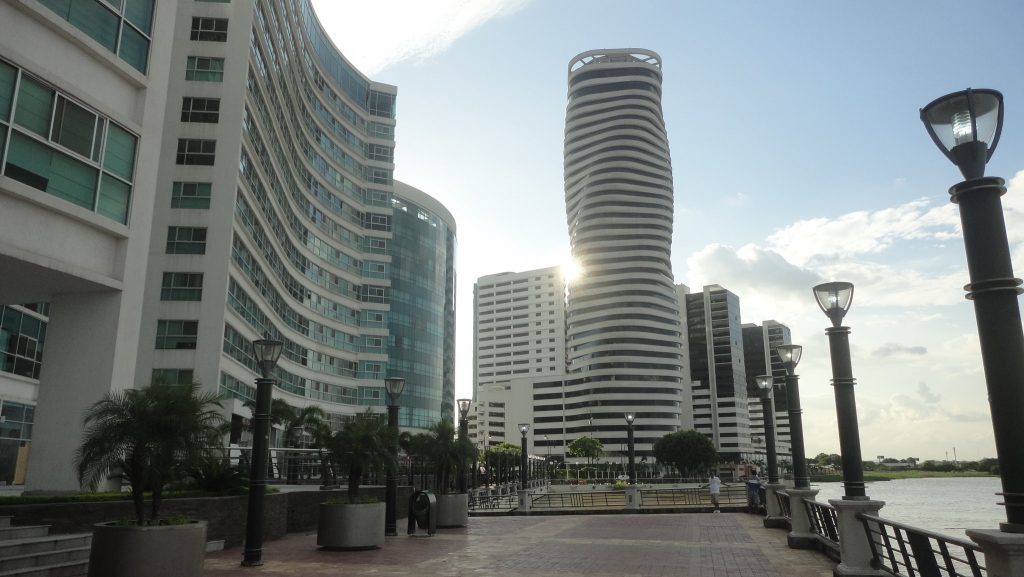 Guayaquil was once full of buildings with businesses on the main floor and spacious homes on the second. Their windows opened wide, more like doors, to allow for any available breeze to make its way in. Today, you can visit one of these historic homes at the Parque Histórico in Samborondón. 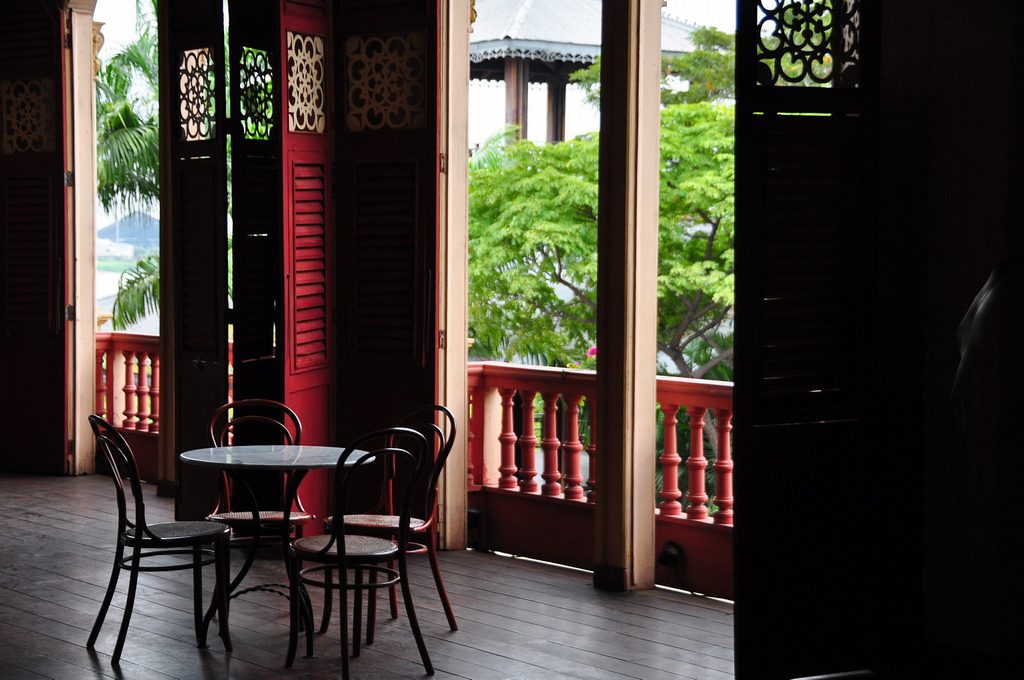 The Gardens of the Malecón 2000

Botanical Garden, Park
Malecón 2000, Guayaquil | © Dan/Flickr
The gardens of the Malecón 2000 include many native species of trees, bushes, and flowering plants. The collection of orchids and bromeliads are the most striking. The well-designed park includes lots of shady walkways with benches for resting along the way.
More Info
Open In Google Maps
Parroquia Pedro Carbo - Concepción Guayaquil, Guayas, Ecuador
Visit website
Visit Facebook page

Park
Iguana Park, Guayaquil | © Dan / Flickr
Perhaps the most famous park in Guayaquil, Iguana Park, also known as Parque Seminario, sits just in front of the Catedral Municipal. Though it is most famous for its reptile residents, it is actually a memorial to Simón Bolivar, the famous South American who helped win the independence of Gran Colombia from Spain.
More Info
Open In Google Maps
Monay Cuenca, Azuay, Ecuador

The colorfully-painted homes of the Calle Numa Pompilio Llona are part of the daytime draw to the neighborhood known as Las Peñas. Tucked in between historic homes are art galleries with a diverse variety of genres on sale. 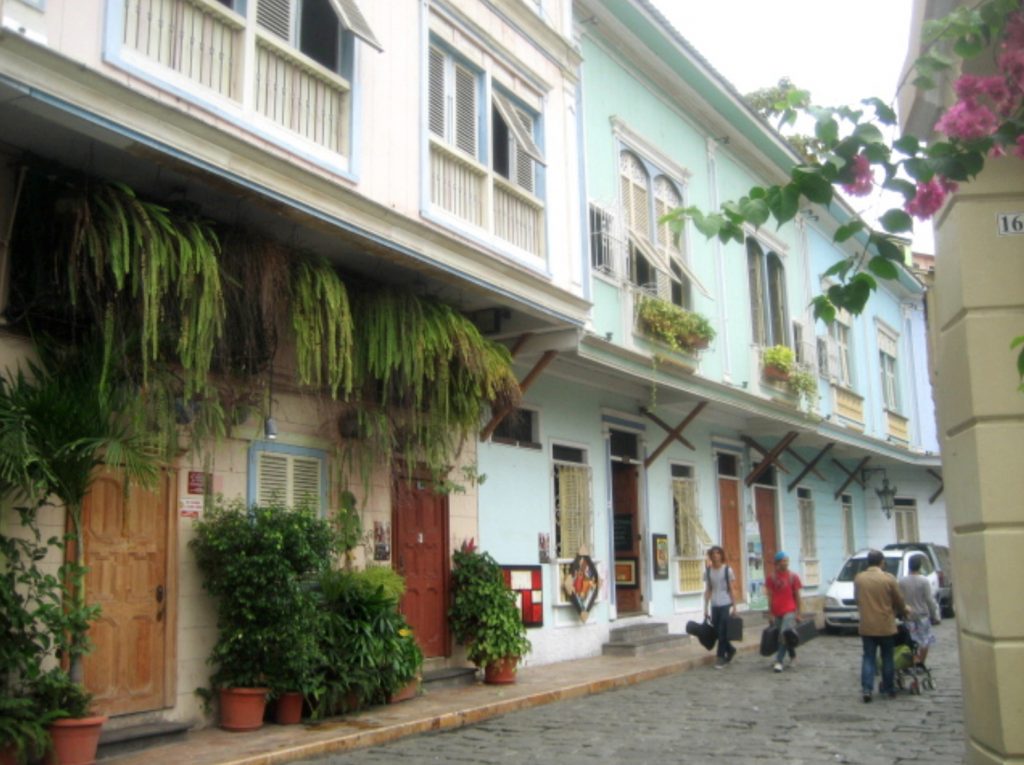 Church
View from Cerro Santa Ana, Guayaquil | © Marco Sanchez/Flickr
The Cerro Santa Ana, a small hill covered in rainbow-colored homes, is best seen from a distance. It looks a little like a cupcake with a single candle, the lighthouse called El Faro. The climb to the top provides excellent views of the Malecón 2000, the center of Guayaquil, and the neighborhood of Las Peñas.
More Info
Open In Google Maps
Tarqui Guayaquil, Guayas, 90313, Ecuador

If you’ve taken the time to hike to the top of the Cerro Santa Ana, add a few more steps to climb the winding staircase inside the famous lighthouse, El Faro. This blue-and-white-striped lighthouse has become a symbol of hope for the city of Guayaquil. A recent addition to the landscape, its presence has helped foster a strong tourist economy in the neighborhood of Las Peñas. 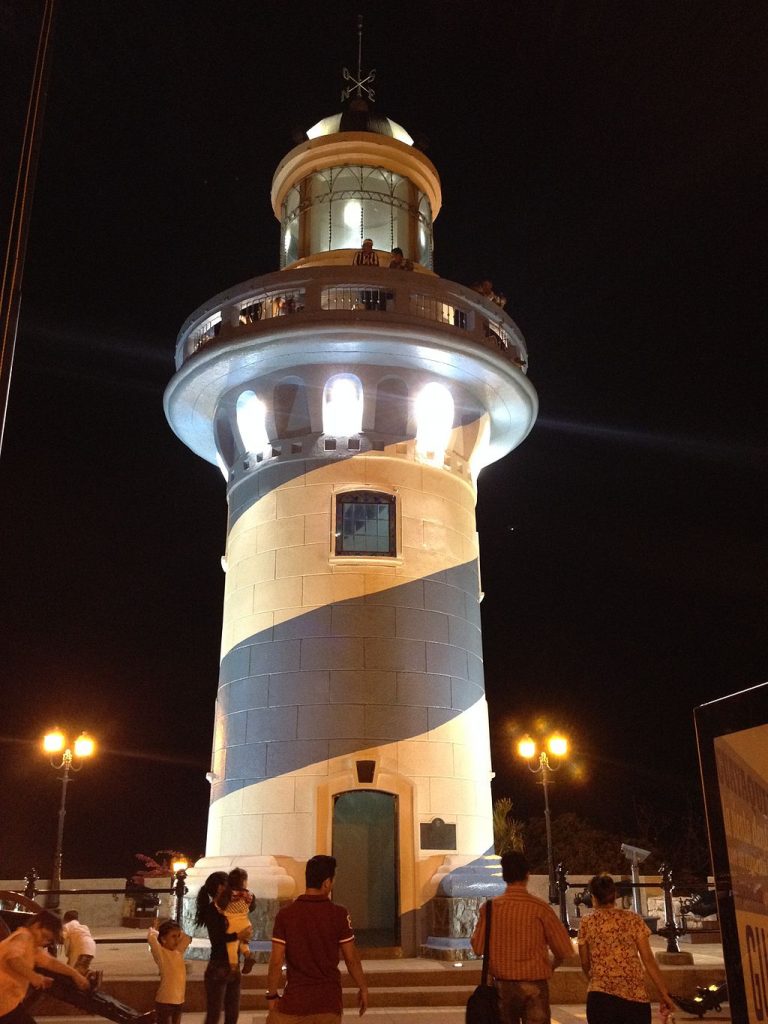 Even if you only go as far as the pedestrian bridge to the Isla Santay, the trip would be worth it. The view of the Río Guayas from the height of the bridge is gorgeous, especially if you arrive early morning or late afternoon. If you add a bike trip along the boardwalk, your day would be well spent. The trails take you through forests of mangroves and across muddy wetlands where rosy-pink spoonbills and squat night herons hunt for tiny fish and small frogs. 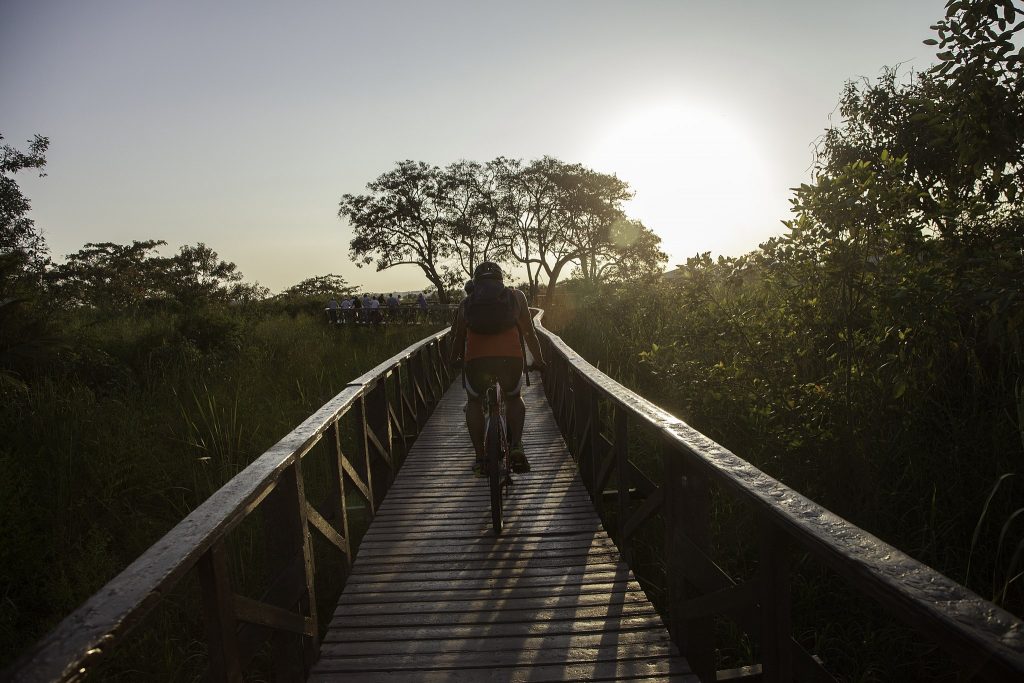 Market
Mercado Caraguay, Guayaquil | © mariaflorine/Flickr
Before heading across the pedestrian bridge at the Isla Santay, stop at the Mercado Caraguay for a breakfast of bolón de verde with some freshly squeezed orange juice and a cup of instant coffee. Or buy the ingredients for a picnic lunch. Either way, a visit to this iconic market will show you how the average Ecuadorian eats and provide you with a unique view of life in the port city.
More Info
Open In Google Maps
134 Calle 43SE (G), Cuba Guayaquil, Guayas, 90102, Ecuador
+593993258536

Forest, Hiking Trail, Natural Feature
This small reserve just outside the Guayaquil city limits carves out a small habitat for the endangered coastal howler monkey. The land is all tropical dry forest and is home to 53 other species of animals, including wildcats, and over 200 species of birds. They have an extensive network of hiking trails as well as places for group picnics.
More Info
Open In Google Maps
Km 16 Guayaquil - Salinas, Guayaquil, Guayas, Ecuador
+593986225077
Visit website

Forest, Park
The port city of Guayaquil is not close to a lot of beaches because it lies on the silty Río Guayas rather than the Pacific Coast. But the small recreation center at Puerto Hondo is popular with families looking for a safe place to swim in the river. A little more exciting are the man-made water features, like waterslides, waterfalls, and fountains where children young and old can play. Many people come to Puerto Hondo to rent kayaks and explore the neighboring mangrove forest.
More Info
Open In Google Maps
Vía a la Costa, Vía La Costa Guayaquil, Guayas, Ecuador
Visit website

Botanical Garden
Jardin Botanico, Guayaquil | © José Manuel Blázquez/ WikiCommons
The Jardín Botanico is a hidden treasure tucked away in a non-touristy neighborhood of Guayaquil. It sits upon a low hill and is surrounded by residential neighborhoods. The trees in the area are covered with iguanas. While the gardens are not in the best repair, their collection of orchids is excellent. The views back to the city reveal that Guayaquil is not only large, but is also very suburban.
More Info
Open In Google Maps
59-2005 Calle 24B NO, Las Orquídeas Este Guayaquil, Guayas, 90703, Ecuador
+59342899689
Visit website

When Guayaquileños want to escape the heat of the big city, they head to the closest beach, Playas. Officially named General Villamil, this small town on the Pacific Coast of Ecuador is home to the Zhañay brothers, makers of handcrafted balsa wood surfboards. The beaches are crowded on weekends and holidays, but can be like a private paradise on the days in between. 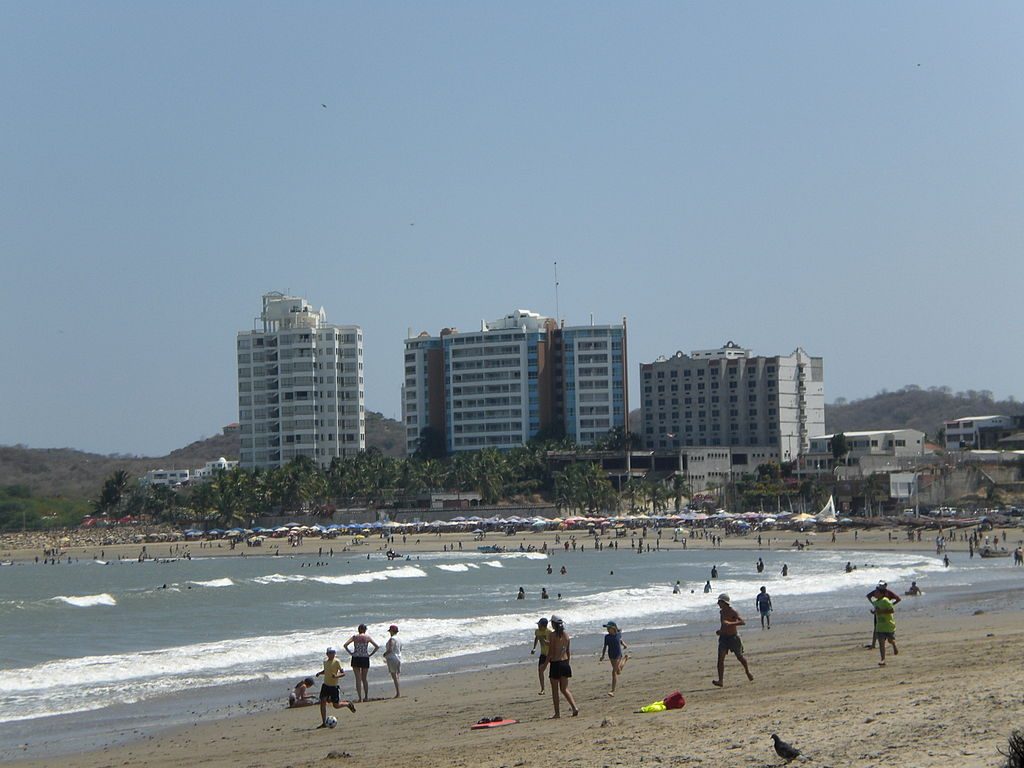