Where to Find Incredible Ceiling Paintings in Colombia 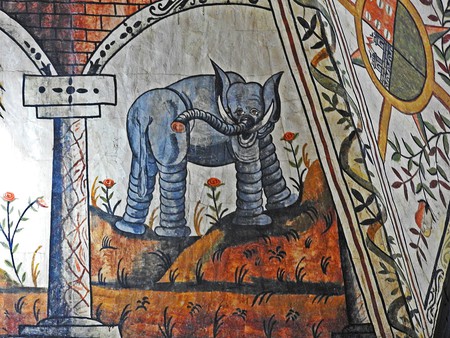 Colombia is home to some incredible artists and works of art, but one of the things it is less well-known for are some the most stunning and unique ceiling paintings on the continent. From remarkable colonial-era works featuring surreal images of elephants and rhinoceroses, to ancient pre-Columbian tombs underneath the ground, there are some wonderful ceiling paintings to be enjoyed in Colombia.

Probably the most well-known ceiling paintings in the country are to be found in two theaters, one in Bogotá, the other in Cartagena. Bogotá’s Colón Theater is the country’s national theater and was constructed in a Neoclassical style in 1885. The theater was recently refurbished, as was the stunning series of frescoes adorning the domed ceiling, which depicts images of saints and religious figures. The theater hosts regular plays and live music events, but it’s worth the visit simply to marvel at the outstanding artistry of the frescoes.

The other famous theater ceiling painting is in the Adolfo Mejia Theater in the Walled City of Cartagena. Opened in 1911 on the site of the former Merced Church, the theater is a beautiful building on its own, but it is the magnificent frescoes painted by Cartagena’s most renowned artist, Enrique Grau, which are the biggest attraction. Depicting the dance of the nine muses of the arts, the painting is the focal point of the already impressive theater, and Grau’s surrealist stage-curtain design just adds to the sense of pomp and history.

These two ceiling paintings may well be the most well-known in Colombia, but they are not the most interesting. That honor goes to the unique and surreal images adorning the ceilings of the Casa del Fundador Suarez Rendon and the Casa de Don Juan de Vargas in Tunja, the capital city of Boyacá department. The ceilings of these old colonial mansions—former homes of the city’s founders—are covered with some of the most bizarre and interesting images of any ceiling in the country. 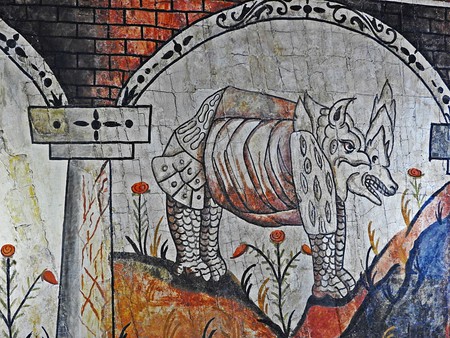 A mixture of motifs taken from Greek, Roman, and Renaissance traditions, as well as some tropical touches, are to be found covering the ceilings of both mansions. Jesus and Zeus vie for space with tropical plants and some of the strangest animal figures you will ever see. There are no elephants and rhinos in South America, and it seems unlikely that the artist ever saw one for himself—clearly painted from descriptions alone, the beasts are a strange mixture of familiar and unreal, as normal details like the horns and trunks are mixed with scales and oddly-proportioned bodies.

Yet the ceiling paintings to be found in Colombia are not all high-art depictions of angels and muses, painted in the vaulted ceilings of mansions and elegant theaters. Some of the most fascinating are to be found in the ancient tombs of Tierradentro in Cauca department. These underground tombs—known as hypogea—date back as far as the 6th century, and reproduce the internal decoration of the homes of the mysterious pre-Hispanic culture which built them. The ceilings are decorated with, “elaborate geometric, zoomorphic and anthropomorphic designs in red and black paint on a white background,” according to UNESCO, who designated them a World Heritage Site in 1995. 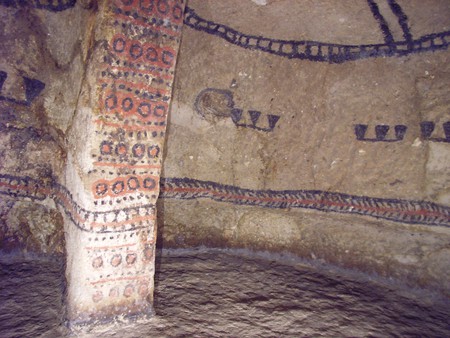 An underground tomb in Tierradentro | © inyucho/Flickr

Any connoisseur of art and culture has surely heard of Colombia in connection to the works of Gabriel Garcia Marquez or Fernando Botero, but few are aware of these beautiful, unique, and historically significant ceiling paintings, which are to be found throughout the country. However, that doesn’t mean that they aren’t worth seeing with your own eyes if only to confirm to yourself that that isn’t what an elephant really looks like.