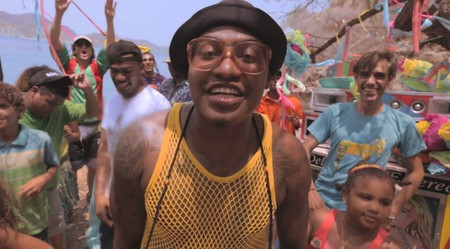 Putting together a Colombian party music playlist might just be the easiest task in the world: Colombians love a dance and you can pretty much put on any good salsa, reggaeton, cumbia, or vallenato song and people will be up and dancing in no time. However, there are some tracks that will get the party started more quickly than others, so here are the 15 Colombian party songs that you absolutely can’t leave off your playlist.

The legendary Carlos Vives is pretty much guaranteed to feature on any Colombian party playlist, and his classic tune ‘Pa’ Mayte’ couldn’t be a better choice to get people in the mood to dance and have a good time.

If you’re putting together a 2017 music playlist, Colombian or otherwise, you can hardly ignore one of the biggest tunes of the year. J Balvin’s ‘Mi Gente’ was everywhere this year, and that irresistible hook is a surefire way to get people on the dance floor.

Systema Solar, with their eclectic mix of tropical hooks, electronic beats and hip-hop verses, are pretty much the ultimate Colombian party starters, and this track, with its upbeat vibe and catchy chanted chorus, will add fun to any party.

Bomba Estereo are another great Colombian band who fuse electronic music with classic Colombian genres such as cumbia, and it doesn’t get much better than their worldwide hit ‘Fuego’, a song so attention-grabbing that it even inspired Will Smith to guest on one of their later tracks.

Vives originally recorded this song in 1995, but a revamped 2015 version featuring Colombian stars such as Fanny Lu, Fonseca and Maluma has become a hugely popular song in Colombia, and its celebration of the country and its singalong chorus are the perfect way to kick off a good Colombian playlist.

The Pacific coast hip-hop group ChocQuibTown have become one of Colombia’s most popular bands over the past few years, but nothing they have produced since quite matches the incredible fusion of rap and traditional Pacific music that they so perfected on ‘De Donde Vengo Yo’.

If you’ve already got people on the dance floor but you want to take your party up to another level, then Mr Black’s classic champeta hit ‘El Serrucho’ is the song to drop. It’s an insanely danceable track with its very own dance moves, and is essential on any Colombian party playlist.

Any track from the incredible Colombian supergroup Ondatropica could slot seamlessly into a Colombian playlist, but ‘Tiene Sabor, Tiene Sazon’ makes the cut here for so perfectly encapsulating the spirit and soul of Colombian music and culture; plus, there’s no way to not dance to it.

Ghetto Kumbe – ‘Eso No Me Falla’

Ghetto Kumbe are one of the hottest acts in Bogotá right now, and their electronic stylings and trippy visuals have swiftly rendered them one of the most popular live acts in the city as well. Their 2017 single ‘Eso No Me Falla’ is a propulsive number that fuses a wonderful hook on the traditional gaita instrument with incredible percussion sounds.

There’s no better way to get a Colombian party started than with some salsa, and there might not be a more beloved salsa star in the country than Joe Arroyo. His joyous ode to the coastal city of Barranquilla is instantly recognisable in any Colombian bar or club and always gets people in the mood for a party.

This track was the song of the 2014 World Cup for Colombia, and since the national team did so unexpectedly well in that tournament, Cali Flow Latino’s addictive track will always elicit cheers from Colombians and get them moving. The dance is ridiculously fun, too.

Two of Colombia’s biggest musical stars together on an anthemic track, with a billion Youtube views on the video? That’s ‘La Bicileta’ by Shakira and Carlos Vives, and the track has achieved such instant classic status that it has to have a place on your playlist.

Sidestepper boasts an impressive list of styles and influences, and nowhere is that more evident than on their classic track ‘Mas Papaya’, which mixes dancehall, hip-hop, cumbia and a really catchy chorus.

Another salsa classic, this time from the Colombian capital of salsa, Cali, this tribute to the swinging city itself is another instantly recognisable Colombian classic, and cannot be ignored when putting together the perfect Colombian party playlist. Sure, there are plenty of other salsa songs you could choose, but few sum up the spirit of Colombian salsa better.

Carlos Vives makes several appearances on this list, because his songs are so beloved in Colombia and so perfect for a Colombian party playlist. ‘La Gota Fira’ dates back to Vives’ days of making more traditional vallenato music, and is the perfect track to get people involved in a singalong and really bring your party together.