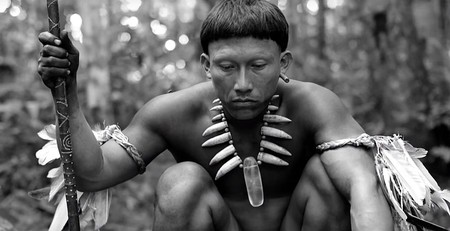 'Embrace of the Serpent' (2015) | Courtesy of Buffalo Films/Buffalo Producciones

Ciro Guerra’s El Abrazo de la Serpiente (‘Embrace of the Serpent’), a stunning black-and-white odyssey through the Colombian Amazon has garnered worldwide plaudits, won several awards and is a film you really ought to see, if you haven’t done so already.

It tells two stories set 31 years apart in the heart of the unexplored Colombian Amazon. The first story, set in 1909, follows Theo, a German ethnographer seeking a plant to cure a mysterious illness which is killing him. The second takes place in 1940 and deals with Evan, a North American botanist who is seeking the same plant for reasons that become clear later in the movie.

The common thread is Karamakate, an Amazonian shaman and the last surviving member of his people. As a young man, he reluctantly helps Theo in his quest and then makes the same journey with Evan, 31 years later.

Unlike many other epic films about the Amazon, Embrace of the Serpent doesn’t exploit its indigenous characters or turn them into lazy stereotypes. The film features around nine different languages; it depicts a complex region, where many distinct people live. This sensitive and pluralistic depiction of the rainforest and the people who reside there is one of the things that makes Guerra’s film so revolutionary.

Karamakate is at once resentful and helpful, moody and playful – a well-developed and intriguing character, and the opposite of portrayals of Amazonians in earlier films, who seem to exist solely as a canvas on which to paint an outsider’s story. The actors playing the young and old Karamakate (Nilbio Torres and Antonio Bolívar respectively) are a further revelation, neither were professional actors, in fact, neither had ever acted prior to the film.

None of the other indigenous actors in the film, and there are many, had ever appeared in a film before. This approach lends true depth to their portrayal of the characters in Embrace of the Serpent; at times it feels more like watching a documentary, a fascinating window into a lost period of history, rather than a fiction film. 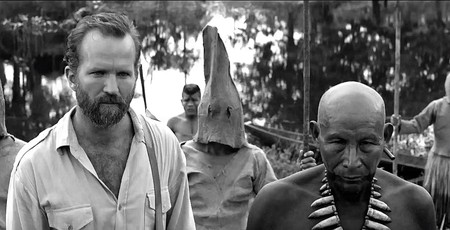 The decision to shoot Embrace of the Serpent in black-and-white was partly motivated by the desire to connect it to the only images that exist from those periods, in what was perhaps the most unexplored area in the vast region. It’s certainly paid dividends and ‘makes the jungle truly come alive’ as one critic put it. Quite simply, the cinematography is gorgeous.

Embrace of the Serpent deals with a wide variety of subjects over the course of its 125-minute running time: the impact of colonialism and the rubber trade on the Amazon and its people; the impact of the clash between tradition and modernity; the feeling and guilt that comes with being the last of one’s kind (interestingly, Antonio Bolivar, who plays Old Karamakate is in reality also one of the last of the Ocaina people); ethnography and ethnobotany; and many more.

The film strongly condemns the destruction of these indigenous cultures at the hands of white invaders, but never preaches at its audience, it simply shows the harsh reality and invites viewers to draw their own conclusions. It exists to bear witness to the lives and cultures of people whom the world will never know; to languages and traditions that have been lost. A mournful sequence of archive photos during the final credits hammers this point home.

The film was first released in Colombia in 2015, and internationally in 2016. It is the first film from the country to be nominated for a Best Foreign Language Film at the Oscars, and won the Art Cinema award at Cannes. It also received universal claim from critics and was included in many prestigious Top 10 lists for 2016, including by Little White Lies, The Chicago Reader, RogerEbert.com, and Mark Kermode. It holds a 97% rating on the review aggregator website Rotten Tomatoes, making it their 23rd best film of the year.

Embrace of the Serpent is a true work of art that depicts the multifaceted history of the Colombian rainforest in a way that no other film has ever managed. No wonder people are calling it ‘the greatest film ever made about the Amazon’.