Things to Know About Cartagena Before Visiting 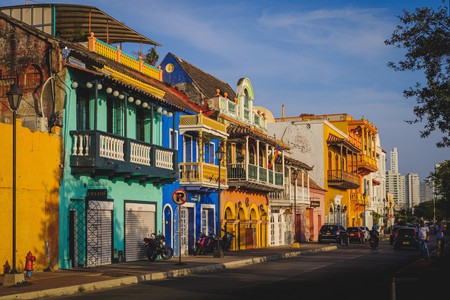 One of South America’s most beautiful cities, Cartagena is a colorful, coastal gem. Here’s everything you need to know before stopping by the Heroic City.

It would be easy to wander the streets of this stunning city, take some selfies against some brightly coloured walls and believe you’ve made the most of your trip to Cartagena. It would also be a wasted opportunity.

This city has so many stories it’s hard to believe they all fit inside Cartagena’s perfectly preserved walls – from the raiding of tombs to the real-life pirates of the Caribbean. Here are some ways to get under the skin of a city as complex as it is beautiful.

A brief history of Cartagena

To understand Cartagena’s present, you need to know the past – and there is a lot to know. The city’s history is not as beautiful as its buildings – for centuries it sat at the centre of trade, but also torture, slavery, piracy and theft of indigenous treasure.

Cartagena was founded in 1533 on the site of an abandoned town, and much of its early wealth came from treasure “discovered” on gravesites of the local Sinú community, which buried the dead with their possessions. The city became the principle port used by the Spanish to transport the riches stolen from groups like the Inca in what is now Peru back to Europe.

For two centuries, pirates made regular attacks on Cartagena – one of history’s most famous pirates, Francis Drake, even successfully occupied the city. The wall itself – considered a masterpiece of military engineering – was built as a defence against these attacks.

Throughout this same period, the Spanish Inquisition set up a base in Cartagena too – interrogating, torturing, and killing “witches” who were deemed heretics or non-believers in the Catholic faith. In over 800 trials at the Palace of the Inquisition, not a single heretic (mostly women of colour) was found innocent.

The city was also at the forefront of the struggle for Colombia’s independence from Spain in the 18th and 19th centuries – among the first cities to declare its independence. Simón Bolívar – “The Liberator” of Latin America – named Cartagena La Ciudad Heroica (the Heroic City).

You might not have heard about Colombian coastal cuisine, but it’s well worth knowing what to look out for – the city is home to a huge range of restaurants and bars – everything from high-end modern costeño gastronomy to the Hard Rock Café. Make sure to try these favorites during your visit.

Fish Sancocho is a base of fish stock (often catfish) with a mixture of potato, plantain, yucca, coconut milk and local seasoning. It is served with coconut rice and patacones (green plantains).

Posta Negra is a cut of seared sirloin steak covered in a rich, sweet sauce made from Coca-Cola and Worcestershire sauce.

Though the city is full of gourmet and traditional restaurants, some of the most typical foods from Cartagena are best bought off the street, where any of the city’s vendors will be making them fresh with local ingredients and flavours.

It doesn’t get much more typical than an arepa de huevo: it’s a thick corn flour tortilla, filled with an egg and some ground meat, closed and fried whole.

Carimañola is a stick of fried yucca flour dough, often filled with cheese or ground meat.

Limonada de coco is a fresh lemonade made with fresh coconut milk – dive off the street and into any leafy café or plaza to get refreshed by the city’s signature drink.

To learn even more about Colombia’s coastal cuisine – Mercado Bazurto is a great place to check out the incredible range of local ingredients and flavours which go into the creation and preparation of these foods.

Where to escape to

To get the most out of Cartagena, be ready to leave it – some of the city’s stories and sites can only be discovered by venturing beyond the walls.

Cartagena’s slave history is not particularly well told in the city itself, so head to San Basilico de Palenque – around 45 minutes by taxi. Palenque was the first officially free town in the Americas – founded by Benkos Biohó after the ship trafficking him was wrecked on the Magdalena River. The Palenque served as a base for his liberation army, raiding plantations and freeing slaves in the area.

Bocagrande has some nice beaches, but to get that perfect paradise vibe, be ready to take a short boat ride to one of the islands. Islands Barú or Rosario offer the white sand, palm trees and perfect sparkling waters you thought only existed in travel magazines.

Dip under the crystalline surface for snorkelling and diving on the coral reefs which flank the coast – there are sharks and eels to be spotted, as well as huge sponges and vast spider crabs wandering the reef.

For something different from the travel-magazine paradise, the area has some unusual natural attractions too, like Volcano Totumo, an active mud volcano with a spa in its crater just outside the city, or there’s a bright pink sea to be swum in at El Salar de Galerazamba.

Get some Spanish under your cinturón (belt) – not just because it’s polite to learn some words of the language before showing up somewhere, but also because not everyone speaks good English in Cartagena, so knowing some Spanish can massively enhance your understanding of the place and the interactions you have there.

A number of the museums have their explanations in Spanish only, so a cheat code is to crack on your roaming and use a scan-translator (like Google’s) to make sure you’re getting the most out of your visit. An alternative is to get a bilingual guide – there are lots of good options in Cartagena – to give you some insight and translate the information for you.