The tough jungle trek to the ancient ruins of Colombia‘s Lost City has become something of a rite of passage for backpackers. Though not for the faint of heart, the chance to explore La Ciudad Perdida is a unique and magical experience, and one not to be missed. Here’s our ultimate visitor’s guide.

The Lost City was built by the Tairona people and is believed to have been founded around 800AD, meaning it predates the much more famous Machu Picchu by some 650 years. It was rediscovered by treasure hunters in 1972 – even though the local indigenous descendants of the Tairona people, the Koguis, Arhuacos, and Wiwas, claim to have known about the site and kept quiet about it – and archaeologists first made it to the site in 1976. The ruins consist of 169 terraces carved into the mountains, as well as a series of tiled roads and small plazas.

Visiting the Lost City is increasingly easy as tourism has increased in Colombia. The trek was closed for a long period of time following a kidnapping incident involving ELN guerrillas in 2003, but tourism hikes were restarted in 2005, and there have been no incidents since that time. 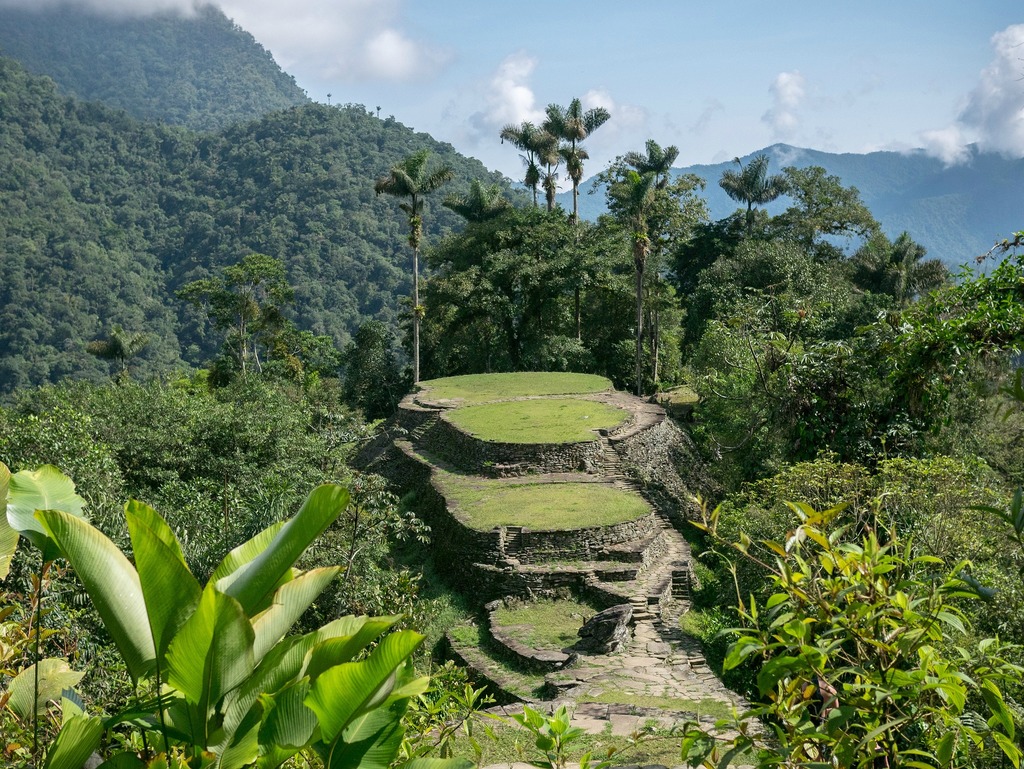 There are several different tour operators which run treks to the Lost City, as it is not possible to visit the site by yourself. The operators all charge a similar amount: roughly US$300-350 for the trek, regardless of how many days you choose to complete it in. The options are four-, five-, and six-day treks: most travellers go for the four-day option to maximise their time, although the five-day option allows for more time for rest and relaxation.

How to choose a trip

Which operator you select is a personal choice: you can make the decision by checking out some of their reviews ahead of time. In high season most companies have a tour leaving every day, and at least every few days throughout the year. Rest assured, you will never have an issue organizing a Lost City trek. Several agencies work extensively with local indigenous guides: as so much of the trek is about learning about these cultures and their history, it’s highly recommended to choose an operator with indigenous guides (this also contributes money to their communities).

The hike itself is a long one – a round-trip of 46.6km (28 miles) – and begins in the small village of Macheté. The itinerary for the five- day/four-night option is as follows:

On the more popular four-day option, days two and three are basically merged together. There is a bit less downtime with this option, and active people might even find the extensive rest periods of the five-day trek a little bit dull. The cost of each option is the same regardless, so those with plenty of time might want to stretch to five days to make their money go a bit further. 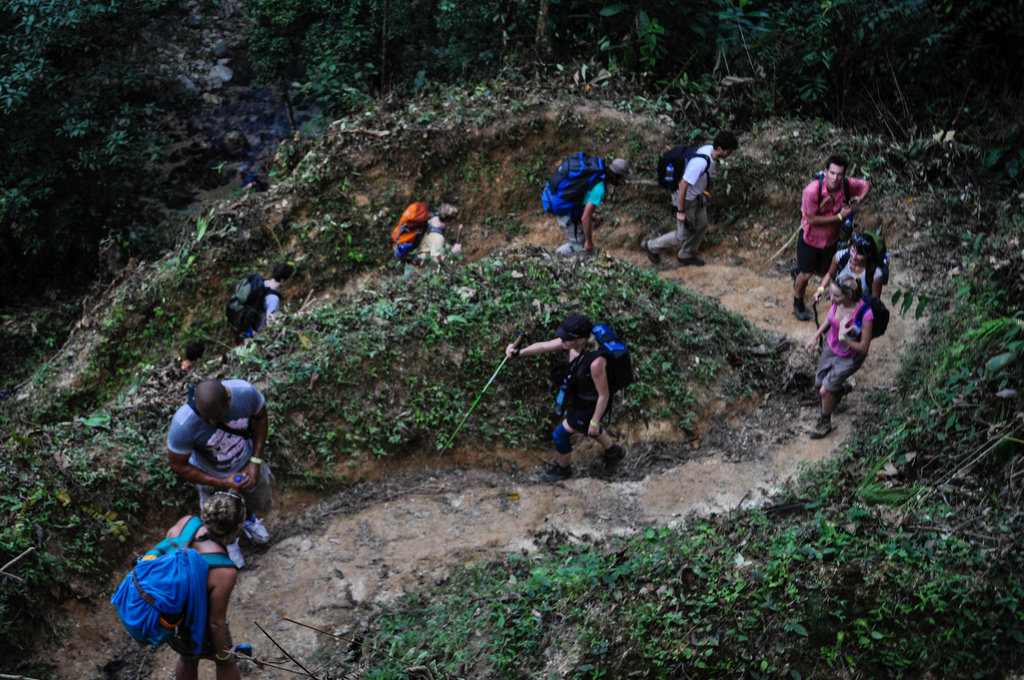 There are some tough uphill sections during the trek ❘ © katiebordner/Flickr

Clothing: it’s a hot and sweaty environment, so large and heavy items of clothing are largely unnecessary – maybe bring one warmer item for the slightly colder nights. It is also better to pack as light as possible, as the last thing you will want to be doing is lugging heavy packs uphill on the tough trail. It is recommended to pack a small bag with a change of clothes, some swimming gear – there are lots of pools and waterfalls to take a dip in, and several river crossings – and a good pair of walking shoes or boots. The trek can be done in most types of shoes, but it is highly recommended to bring some good ones, as the trail can be slippery and muddy.

Food: There’s no need to bring food as the cost of all treks includes all meals and plenty of snacks: you’re unlikely to go hungry! A refillable water bottle is a good idea, and you are able to refill at all the campsites. There are also spots along the trail to buy water and soft drinks.

Other: There can be a lot of rain, so some dry-bags for electronic items are a good idea, as is a raincoat or rain poncho. Finally, stock up on bug-spray: there are plenty of mosquitoes along the trail! 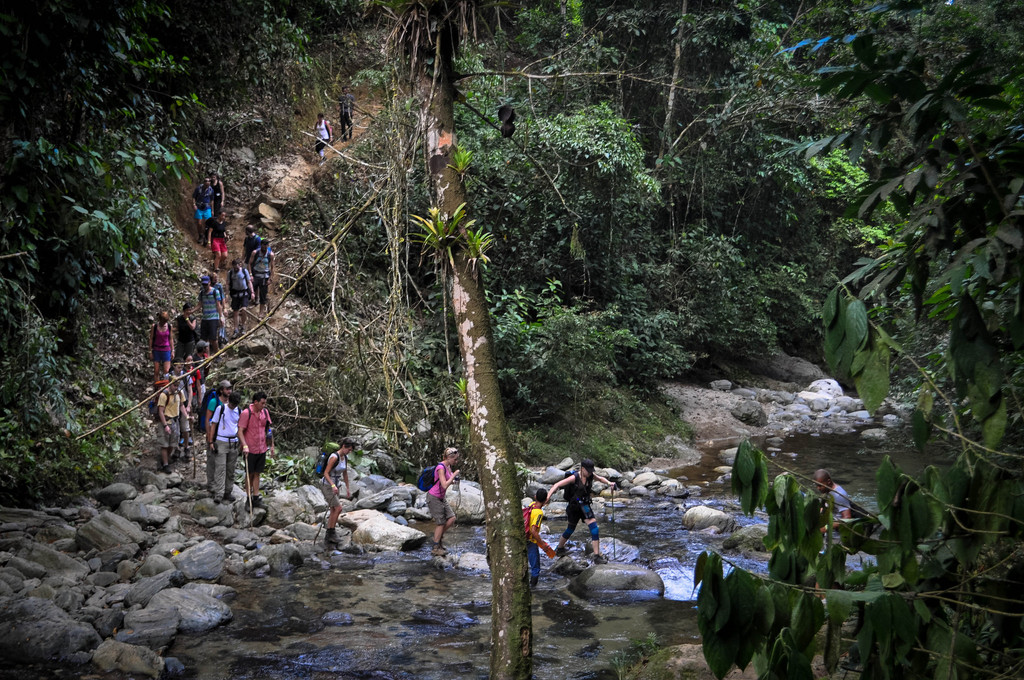 There are also several river crossings to contend with ❘ © katiebordner/Flickr

Trekking to the Lost City isn’t easy by any means – most people class the trek as moderate to difficult – but is an amazing experience, and sure to become one of the standout memories of any trip to Colombia. So just follow this guide and you’ll have an amazing time visiting the Lost City of Colombia.